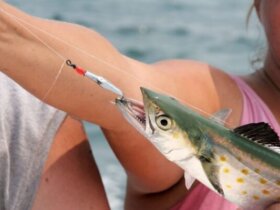 The Trinidad and Tobago Game Fishing Association (TTGFA) has lost one of it’s founding members and former Secretary,Sid Johnson.

When he passed away due to illness on November 6th 2009 it came as a great shock to the Game Fishing fraternity in Trinidad and Tobago as Sid has been involved in many ways for the betterment of the sport in the Southern Caribbean region. Sid was a part of the TTGFA management committee from inception in October 1986 to 2007.

Sid always advocated conservation efforts in the region and was concerned about the long liners and industrial trawlers operating in these waters. He lobbied against these practices in the Gulf of Paria in Trinidad and was included as a member of the task force which produced a document that was presented to the Trinidad and Tobago Cabinet to assist in dealing with these matters.Sid’s passion for conservation led him to taking several photographs of Taiwanese large scale pelagic driftnet boats seen at National Fisheries in Sea Lots,Port Of Spain, Trinidad and sent them to the International Game Fishing Association (IGFA). These photos were later published on the cover of the New York Times. This feature article turned out to be the first time that a conservation story was featured on their front cover. Through this effort one of the biggest coalitions was formed by conservationists of which Sid was an active member. As a direct result of this the United Nations banned large scale pelagic drift net fishing and Sid received an individual conservationist of the year award from the IGFA based on his involvement.

Another award was given to him by the Billfish Foundation for individual of the year in 1991. These accolades were showered on him as his work for the TTGFA and fisherfolk in general continued. He was part of a Trinidad and Tobago Cabinet appointed committee that was formed to deal with foreign fisheries and related matters. A few years later he was able to work with the North Coast Fisherfolk to stop trawling in the Gulf of Paria and restrict them to no more than 2 miles off Trinidad’s North Coast and no further than Saut d’eau (an Island just off Trinidad’s North Coast) during the months of February to November.

Sid will always be remembered as being the Southern Caribbean Pioneer of Billfish tag and release fishing. He also was instrumental in having the Institute of Marine Affairs and Fisheries Division in Trinidad and Tobago conduct samples of fish caught in various local tournaments. At the time of his passing he held a cabinet appointed post on the National Monitoring Committee on Foreign Fishing and related matters and was also a member of the Trade and Industry Fish and Fish processing team of the Trinidad and Tobago Prime Minister’s Vision 2020 committee.