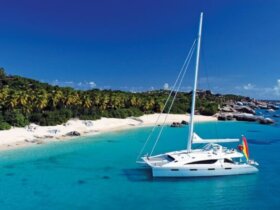 Two days before the 29th Sweethearts the West End Yacht Club committee knew they were staring down the barrel of “The Big One”. Entries were rumored to be at a record, and news was coming in of several boats in the 80 to 100 ft range. (After the last two years’ mediocre turn out, WEYC had been wondering where all the Schooners had gone. So this year they left no stone unturned in promoting the race—one contestant said he heard about the race in France via the internet!)

Commodore Martin van Houten voiced concern that there would not be enough room in Soper’s for the fleet to start! But options to start in Drakes channel were rejected due to loss of the spectator opportunity. The traditional course was, however, amended to avoid the questionable beat through Thatch Cut.

On Friday, the old and not so old Sweethearts began arriving to fill the moorings, including Philip Walwyn’s first rule 12 metre 78ft Kate from St Kitts. (With no engine, a private mooring had been arranged for her arrival). With special dispensation she would sail with the schooners “for practice”.  In all  the fleet rounded out to Seafari 35ft, Snap 52ft, Liberty 65ft, Fiddlers Green 65ft, Heron 65ft, Taeoo 88ft, Alliance 105ft, and Silver Cloud 110ft.

Saturday dawned with the feared light winds and warnings were given at the skipper’s meeting about course shortenings. Eight schooners crossed the line followed by twelve single handers on the 16 mile course to Sandy Cay. Gollywobblers and fishermans were hoisted to catch the fleeting gusts. But the wind gods must have had their share of Mount Gay the night before as they dropped a no-wind hole on the “windward” side of Sandy Cay swallowing the whole fleet. After an eternity with boats near the rocks, canny Long Island Sound sailor Charlie Haines saw movement on the water behind the rocks. Lifting the center board on Lydia he slid her inside and left the fleet behind by half a mile.

Snap was well placed as she entered the last beat but suddenly reported her steering link had let go and was now rudderless. The powerful chase boat loaned by King Charters was called up to stand by and Snap was towed to her mooring by a willing visitor. She was all ready to go next day. Despite course shortening for the Schooners, several were DNF while almost all the single handers made the full course to Great Bay Jost van Dyke by the 5 p.m. deadline. Visitors and locals were equally confounded by the Frenchman’s Cay current which flooded for the start but opposed them in the last beat to the windward finish. All chose the difficult southerly shore and fought current to the line. (Strangely nobody tried the rational short tack solution on north shore – but then Schooners don’t tack fast, do they).

On Sunday the Schooners were out for blood (arrrr!) and several entered in the 25th Classic which swelled the fleet to twenty-six. Winds were still light in Drakes Channel for the 13 mile course around Pelican Island. Boats were started in two flights (Classics and Wannabees) on a reaching course to cross the line with speed. Sadly there were no entrants for the special couple’s race –so where are all the fraternizing couples this valentine weekend—let’s not go there.

In the first flight of Classics, Charlie Haines, making a tight committee boat approach, was faced with a T-bone situation on 88ft schooner Taeoo who had let her mooring go and was drifting backwards into the race course. Charlie grabbed the moment, hardened up and made it around Taeoo’s bow for a perfect start! The second flight of Wannabees was equally eventful as the boats were all tightly packed for a timely start with Taeoo now bunched in the middle of the pack! Given her size, speed and momentum she nosed here way through the pack as the gun went off.

However, Tony Sanpere was having none of this. He took his 51 ft Cayenneup high and luffed Taeoo before she cold roll over Cayenne—forcing Taeoo to duck his transom by a heart stopping margin. Tony went on to win his the class. (With Cayenne and Cayanita up for sale it appears Tony has a very big pair – of boats that is.) The committee had made the wise decision to omit the last rounding of Little Thatch, avoiding the tricky beat up into the Frenchman Cay’s tide race. Thus spectators enjoyed the Classics fleet finishing under spinnaker in a westerly direction.

With prizes for all and a sea of Mount Gay red hats on both days, the accolades started to come in for a great regatta. The last word goes to Kay Schwartz who said it was unquestionably the best regatta they had ever seen at the Jolly Roger whose staff worked tirelessly for three very busy days. At the post-race critique the committee concluded that running a 31 boats, four race regatta with only five on the race committee was cutting it fine. Any volunteers for next year?