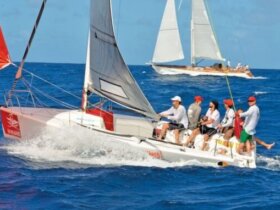 The 37th running of the St. Maarten Heineken Regatta, which took place on March 3-6, had something for everyone: big breeze, record-setting performances, impressive winners and a wrap-up party headlined by legendary performance artists UB40 on the sands of Kim Sha Beach. The event’s motto is ‘serious fun’ and it once again lived up to its well-earned reputation.

A fleet of 164 entries, competing in 17 dedicated divisions for racing monohulls and multihulls, bareboat charter yachts and cruising boats, set sail on Day 1 of the event in a staunch easterly breeze topping 20-knots on the annual round-the-island race.

The conditions proved to be ideal for the French Volvo 70, SFS II, skippered by the veteran ocean racer Lionel Pean, which set a new record for the course of 2h, 10m, 37s. It proved to be the start of a dominating regatta, as Pean’s well-sailed 70-footer went on to win all four races over the long weekend to easily capture first place in the five-boat Ocean Racing Class.

Even so, when all was said and done, the honor of Most Worthy Performance for the regatta belonged to Ross Appleby’s Oyster 48, Scarlet Oyster, in the highly competitive, nine-boat CSA 1 division. It was Appleby’s 13th straight St. Maarten Heineken Regatta but the first time he’d won his class, and as he accepted his trophy he vowed to return next year to defend his championship.

There were plenty of well-known Caribbean sailors sprinkled throughout the fleet, but no single division was more impressive for its local flavor than CSA 4, which proved to be ‘the battle of the knights’: among the eight skippers in the class were St. Maarten’s Sir Robbie Ferron and Sir Bobby Velasquez, and Antigua’s Sir Hugh Bailey. It came down to the last of five races, with Velasquez’s 45-foot L’Esperance trailing his longtime rival, Ferron’s J/39 Micron 99. But when L’Esperance pulled off the victory and Micron 99 finished fourth it gave Velasquez satisfying bragging rights for another year.

As always, there were plenty of international entries as well, and some star-studded sailors competing on those yachts. Among the celebrities were Saskia Clarke of Great Britain, the Olympic gold medalist in the women’s 470 class in the 2016 Rio de Janeiro games, and American Brad Kendell, the Paralympic silver medalist in the Sonar class in Rio. Both sailed on class winners, with Clarke crewing for Sir Richard Matthews aboard his 42-foot Oystercatcher XXXI in CSA 2, and Kendell trimming the main on the Dufour 455 KHS&S Contractors, which won the Bareboat 3 class and was also named the top Bareboat Overall.

One of the great things about the St. Maarten Heineken Regatta is its inclusive nature, with competitors racing boats as disparate as Melges 24s and Swan 100s, and everything in between. In the former class, another pair of strong local rivals dueled it out, with Andrea Scarabelli’s Gill Race Team taking first place just ahead of Frits Bus’s Team Island Water World 1. At the other end of the spectrum was a pair of 100ft Swans, Tomex Ulatowski’s Varsovie and Miquel Huma’s Muzuni, in the seven-boat Maxi class. When the smoke cleared, however, the winner of the class on corrected time was St. Maarten’s Nico Cortlever, sailing the X-612, Nix.

The popular J/Boat brand was well represented in this year’s fleet. Mitch Padnos earned top honors in CSA 3 aboard the chartered J/122, El Ocaso. And Dave Cullen, from St. Barths, was the winner of CSA 5 on a J/109, Pocket Rocket.

It wasn’t all about flat-out racers, though. In future regattas, event organizers hope to see more cruising boats, and have designated the Lottery Class for cruisers with an easier racing schedule and dedicated parties. Veteran Heineken campaigner Hank Schmitt, owner of the Swan 48, Avocation, is at the forefront of this movement, and this year the Lottery Class fleet included an Alden 50, several Beneteaus, a Jeanneau, a C&C and a Catalina, many of which raced with dodgers and Biminis set up and wind generators whirling. The winner of this eclectic group was a modest Holiday 33, Caribella, sailed by Gordon Robb.

For full results, photos and much more, visit the regatta’s website: www.heinekenregatta.com.