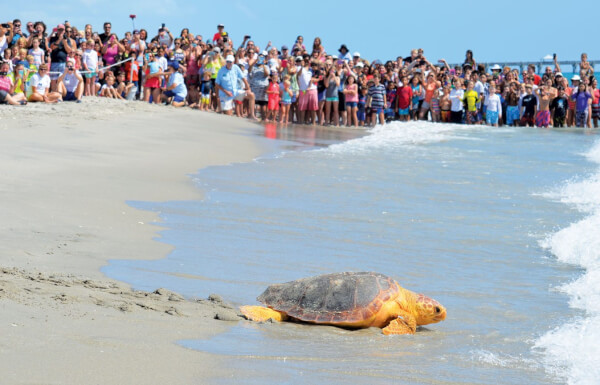 A chance observation that many sea turtle hatchlings were heading away from the sea rather than toward it during nesting season in Palm Beach County, led to the foundation of the Loggerhead Marine Life Center (LMC). Today, the Juno Beach, Florida-based LMC’s mission is the rehabilitation and conservation of threatened and endangered sea turtles. What this means is that there are many hands-on ways that visitors can get close-up and personally involved in the well-being of these wildly popular marine reptiles.

“There are many reasons why our beaches are so densely populated with sea turtle nests,” says Hannah Deadman, the LMC’s public relations and communications coordinator. “Two of these are our location relative to the Gulf Stream as well as the fact that there is less light pollution here compared to places like Broward or Miami-Dade Counties. However, we are not entirely sure of all of the reasons as sea turtle research is a relatively new field.”

It was LMC founder, Eleanor Fletcher, who noticed the sea turtle hatchlings taking a wrong turn in their migration to the sea. Curious about this, Fletcher decided to dedicate her life to teaching others about the importance of sea turtle and ocean conservation. She first started the Children’s Museum of Juno Beach in 1983. Reflecting on its expanded work, the organization’s name was changed to The Marinelife Center of Juno Beach in 1990. Finally, the facility was renamed the LMC in 2007, when its current campus opened at 14200 U.S. Highway 1.

“We mainly rescue and rehabilitate loggerhead and green sea turtles. However, we occasionally care for hawksbills, Kemp’s ridley and olive ridley,” says Deadman. “The public can symbolically ‘adopt’ one of our sea turtle patients at $35, $50, $75 and $100 levels. Each of these levels comes with different fun items like a T-shirt, DVD, a sea turtle plush toy and more as well as information about sea turtles. Proceeds from the adoptions go toward the care of the patient, such as food, medications and other treatments. 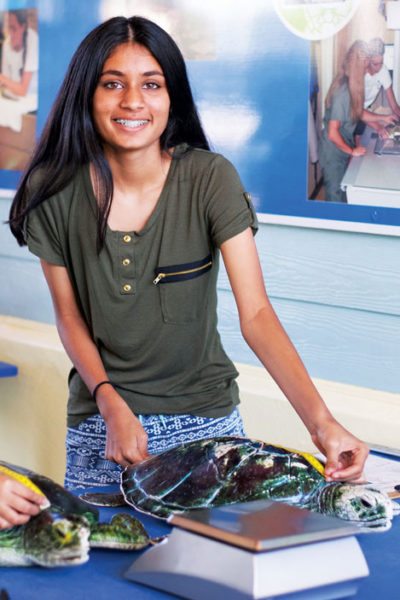 A great success story is the rehab of a sea turtle patient named Xander, a loggerhead that was brought to the LMC’s hospital after being rescued in the summer of 2015. Xander was found in critical condition, entangled tightly in heavy fishing line. In fact, both back flippers were broken, making it difficult for the turtle to swim or eat. However, Dr. Charles Manire, the LMC’s veterinarian and director of research and rehabilitation, and his team carefully removed the line and rope from Xander. Once the turtle was strong enough, Dr. Manire performed surgery on the fractured flippers. With time, treatments and care, Xander’s wounds completely healed and the turtle was released into its ocean home in March 2016. 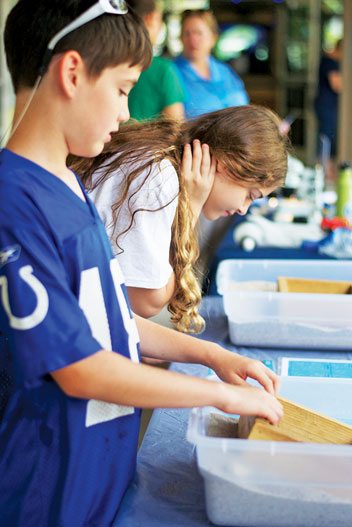 “We always update our social media, website, phone systems and on-campus signage, and send out a local media alert when we are going to have a release. In addition, our Hatchling Release program in August is a unique experience that allows visitors to learn about sea turtles and the nesting and hatching process. The program begins with an exclusive, behind-the-gate tour to meet our current sea turtle patients, followed by a presentation and ends with a trip to the beach to see LMC staff release sea turtle hatchlings into the ocean,” says Deadman. 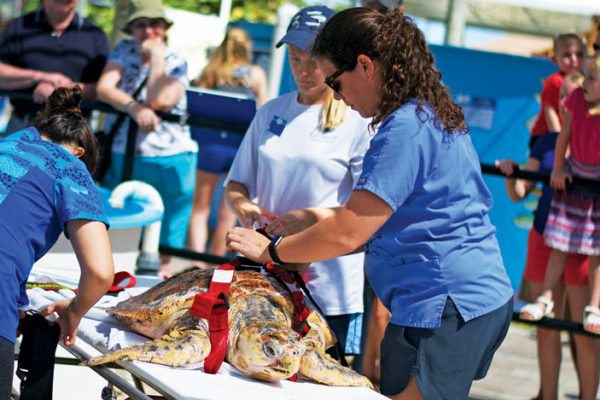 The LMC also offers its Biologist Beach Walks program in August and September, which gives visitors insight into the LMC’s research department. With permission from the Florida Fish and Wildlife Conservation Commission (FWC), a permitted staff member leads guests down onto Juno or Tequesta beaches to discuss the nesting and hatching processes of sea turtles. After an introduction to these processes, visitors may have the opportunity to witness a live excavation and create their own data sheets to take home as a memento.

To prevent harm to sea turtles, Deadman recommends that boaters slow down while in offshore waters during nesting season from March through July. This is because many females spend more time near the surface resting at this time, putting them at higher risk of being hit by a vessel. In addition, since marine debris is a huge issue, properly disposing of trash and recycling plastics, fishing line or other items can help to reduce the negative impact of this debris in sea turtles. 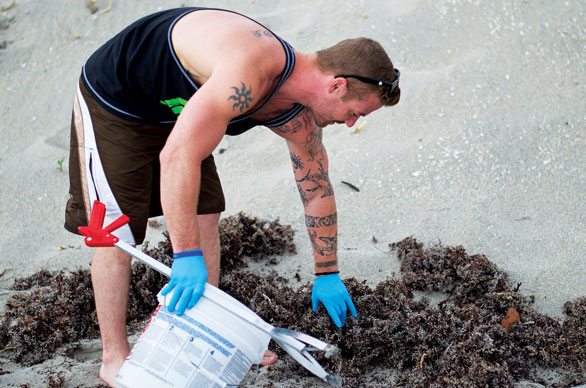 “If you ever happen to encounter an injured or stranded sea turtle, call the FWC immediately at 1-888-404-FWCC (3922) or you may dial *FWC or #FWC on your mobile phone. Once you have contacted FWC, you are also welcomed to call the Center at our 24-hour Emergency Response number (561-603-0211), if you need assistance with the rescue,” invites Deadman.

For more information on the LMC, visit: www.marinelife.org