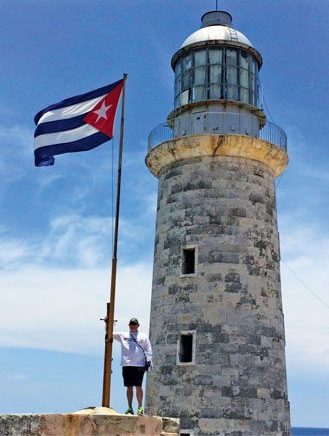 Lighthouse Larry of the Florida Keys came to the revelation that lighthouses needed help when he saw their decay up close. Until then, he never thought much about them, even though his mother was “obsessed with lighthouses.”

Larry Herlth was a typical Keys kid in the early sixties and seventies. Primarily raised by a single mom with five brothers, Larry said they did not own much in the way of things, so he had to figure out how to make them. For example, his mom bought him clay and he molded his own Army men and trucks.

Various Keys friends and acquaintances shared their skills and knowledge during his youth.

His stepfather was a lobsterman who sculpted a dolphin out of coral rock which inspired Larry’s love of art and working with his hands. “Everything I know, art-wise, is self-taught out of a desire to know how to do something.”

Herlth often watched those around him and imitated them.

“Barefoot Stanley” taught him how to weld. “I watched him cut things off with torches. Stanley welded things out of scrap, and repaired cars, trucks, pulleys, fly wheels
and gears.”

Herlth then learned woodworking and cabinetry while working at KLI Lumber in Key Largo.

The first time he ever welded aluminum was for a recent commission to replace the decorative lighthouse at Whale Harbor Restaurant in Islamorada which is modeled after the Nauset Lighthouse in Cape Cod. It replaced a coral rock lighthouse that graced an all-you-can-eat buffet but was damaged by fire and natural elements.

He earned his nickname Lighthouse Larry when neighbors commissioned him to do a lighthouse for the end of their jetty. Trevor and Edna Gray gave him freedom to use his imagination, and their yacht captain suggested he fashion it after Alligator Lighthouse, which stands off the coast of Islamorada. Capt. Jim Daisy took him out to the lighthouse and Larry said he really looked at it. “I took a camera and it occurred to me how awesome it was.” He observed the architecture and the brackets so he could re-create them but also realized the structure was in bad shape.

Using copper for the first time, Herlth created Alligator Lighthouse for the jetty. But images of the lighthouse stayed with him. He researched Keys lighthouses and their illustrious history and learned about organizations that sought to preserve and protect lighthouses. He shared his knowledge and concern with others but it wasn’t helping. He decided since he was an avid swimmer, he would swim to the lighthouse and back – nine miles – to call attention to the plight of lighthouses. On August 1, 2012, six days before National Lighthouse Day, Herlth’s athletic feat was promoted by the Keys’ tourism agency, and the swim became a yearly event.

In September 2012, Herlth swam to and from Sombrero Lighthouse off of Marathon in the Middle Keys – 16 miles  – also to call attention to needed repairs.

The fifth annual Swim for Alligator Lighthouse is set for Sept. 23 in Islamorada (www.swimalligatorlight.com). The open water swim passes over seagrass and coral reefs and attracts international participants. 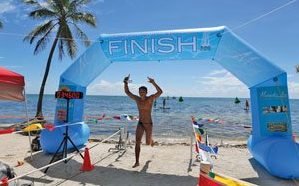 Swimmer Eliza Colmes of Islamorada said the scenery is amazing. “We have seen dolphin, turtles, more lobster than you can count and every species of tropical fish that swims here.” Colmes has swum it twice on a four-person relay team, but this year, she will swim solo. “The best part of the swim as a relay is the camaraderie with teammates,” which for her included former Olympians Jon Olsen and Jeremy Linn and local artist Beth Kaminstein. 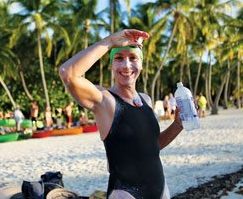 Kaminstein has been part of a relay twice as well. “The best part of the swim is the water. It’s glorious, clear, and as you get closer to the lighthouse, visibility gets measurably better… The worst part of the race is dealing with all the variable factors of nature. It could be the current, wind, waves, jellyfish and the challenges that weather can pose.”

Experiences of Marine Science Experts: Third in a Four-Part Series