I first met Morgan Sanger in 1990 when I was living in Soper’s Hole, West End, Tortola, where he was the owner of Frenchman Cay Shipyard and an avid racer on his gorgeous sloop, Iolaire, a Blackwatch 36.  Morgan has always been an entrepreneur, a trait that he obviously inherited from his grandmother Margaret Sanger, founder of the American Birth Control League (Planned Parenthood); and he has always loved sailing vessels.

The next year found him in Valenca, Brazil, fully immersed in the building of the Nina, a replica of Christopher Columbus’s famed vessel, for the Tall Ships Parade during the 500th celebration of Columbus’ discovery of the new world in 1992.  My partner, Dave Cooper, captain of the Nina during the following year, and I joined Morgan and his philanthropic wife A.J. for the Tall Ships Parade in Puerto Rico, leading to their entry into New York and Boston Harbors for the spectacular Tall Ships celebration.

After touring the Nina for more than 15 years throughout the United States, Morgan has embarked on the launching of a second Columbus ship, Nina II, – the Santa Clara. Built by hand in Brazil of 10 different types of native wood, the Santa Clara is a Caravel Design, typical of the explorers of the 15 & 16th centuries.  According to the Columbus Foundation, owners of the two ships, “The building of the replicas was a search for information. There were no authentic pictures of the Pinta, Niña or the Santa Maria, and all of the so-called models, replicas, or reproductions that had been built in the past merely represented what some artist, architect, archaeologist or model ship builder thought what they ought to have looked like.”

The Santa Clara measures 90’ with a keel that extends only seven feet into the water allowing for shallow water navigation and anchoring closer to shore.  The below deck area, which in Columbus’ day would have carried livestock, now houses a bar with a seating area for 40 for educational tours of the vessel. The Santa Clara sails in July for her permanent home in Grand Cayman, Cayman Islands where she will be the second ship in Morgan’s fleet.

Cesar Samento, one of the builders of Nina I, now first mate on the Santa Clara, traveled to more than 450 American towns and some dozen and a half rivers in America on tour.  I still delight in having him describe the building of both vessels using skills that were handed down to Brazilian shipwrights from their Portuguese ancestors.

A.J. Sanger, publicist for both replicas, scheduled a most successful fund raiser for St. George’s School while the Santa Clara visited in Tortola, BVI recently.  Morgan also opened the boat to local schoolchildren during a short visit to Nanny Cay Marina where he gave a most informative lecture on the building of the Santa Clara.

“Unlike the original Santa Clara, we have an engine which is hidden in the ship.  Our crew sleeps in air-conditioning and we enjoy a modern chef aboard. We used no blueprints in building either ship, the Nina or the Santa Clara, but depended entirely on the skills of Brazilian shipwrights,” Morgan tells All At Sea.

I know I speak for all sailing enthusiasts when I wish him and A.J. the very best in this educational endeavor.  The BVI can be proud of having The Columbus Foundation, founded by Morgan, as a part of their sailing heritage. 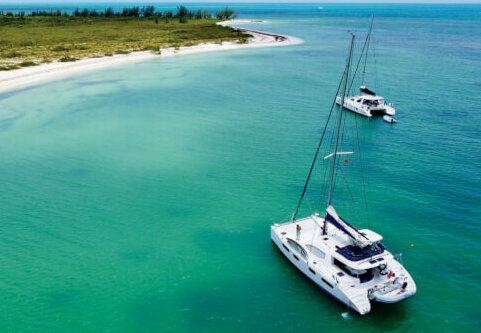