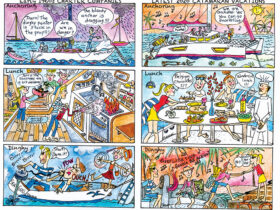 Antigua Sailing Week’s Lay Day will have a fresh and thrilling racing event, The Nonsuch Bay RS Elite Challenge. This invitational event will feature a fleet of RS Elites and will offer high-quality one-design racing for accomplished skippers and their teams. First prize will be a week’s stay for two at Nonsuch Bay Resort, Antigua.

“Antigua Sailing Week’s reputation goes before it. Surely every sailor has it on their list of one of the regattas they’d most love to do and I think it is really cool to have the RS Elites racing there,” says RS Sailing Managing Director, Martin Wadhams. “The Stadium racing format, with small courses and short races close to the shore really compliments the Elite’s attributes. I reckon the racing will be fascinating to watch with very little separation between the boats.”

Rán Leopard, helmed by Niklas Zennström and with Adrian Stead on tactics, completed the Transatlantic Superyacht & Maxi Regatta in 7days, 8 hours, 59 minutes and 12 seconds to claim line honors and smash the course record.

The new course record beats the previous one set by Hetairos in 2011 by 25 hours, 59 minutes and 18 seconds.

Organized by the Yacht Club Costa Smeralda in collaboration with the International Maxi Association, the race saw six maxi yachts and superyachts leave Tenerife on November 26 bound for the YCCS Clubhouse and Marina in Virgin Gorda’s North Sound.

United Insurance Company Ltd., is to take up the key role of Title Sponsor for the Grenada Sailing Festival Work Boat Regatta for 2013. The company has been a top level supporter for many years and now moves into the central role for the 20th Anniversary celebration of this very popular high profile national event, held on the weekend of February 1st – 3rd on Grand Anse Beach.

Grenada’s newest yacht club has elected John Whitsett to the position of commodore for the next one-year term. Whitsett was the first official Club member when the Petite Calivigny Yacht Club (PCYC) started up in 2010, and has been an active committee member for most of that time. He is a familiar face around Grenada, particularly as owner and captain of the beautiful classic schooner Raindancer which is regularly moored at Le Phare Bleu Marina. He replaces Jeanie Parr who successfully governed the club as commodore since inception.

The PCYC was formed by a group of boating enthusiasts to support yachting events and water sports in Grenada, particularly in the Calivigny Bay area. New members are welcome. For more information, visit: www.pcycgrenada.com

Following departure activities in Hampton, Virginia, and a few days of weather delays before departure, all 58 cruising boats of the Salty Dawg Rally arrived safely at their various destinations, with the majority going to the BVI, said Bill and Linda Knowles, co-founders of the rally. “The weather on the trip down was generally pretty good, with a few days of lots of wind and some without any wind, but all in all, it was a very successful passage by all boats,” Bill Knowles said. “There were no injuries, no damage, and no serious issues. It really was fun for all.”