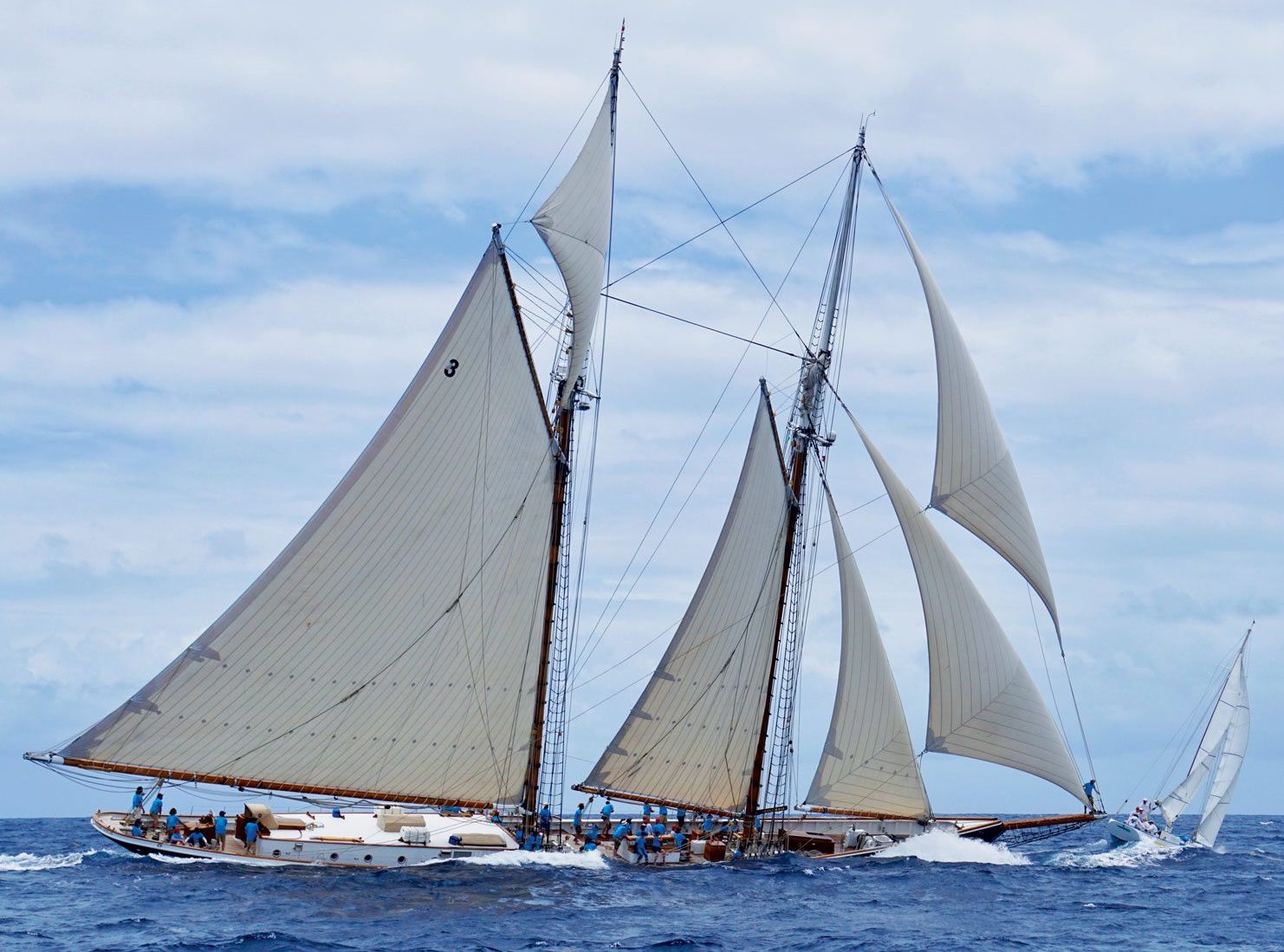 St. Thomas, US Virgin Islands. Sleigh rides for some and slogs for others characterized racing in today’s first annual Round the Rocks Race, a 21-mile clockwise circumnavigation of the island of St. John and tune-up for the St. Thomas International Regatta (STIR), which takes place March 25 to 27.

“We had great racing, conditions were ideal and it was a good course around St. John,” says Boston, MA-based Stephen Cucchiaro, whose Gunboat 60, Flow, beat Rye, NY’s Robert Alexander’s, same make and length, Fault Tolerant, in the Large Multihull Class. “There was some really close racing between us going upwind the northside, but they (Fault Tolerant) was able to maintain an edge over us. But, we had better boat speed downwind and were able to beat them in the end.”

“It’s nice to take part in something new and help the organizers out,” says Bus. “We would

have done better, but Spookie was already headed downwind when a squall hit. We were going upwind at the time and it really slowed us down. Then the wind died after the squall. Still, it was a lot of fun.”

Flow, Spookie and Affinity’s skippers were awarded limited edition timepieces created by Cardow Jewelers, headquartered in St. Thomas, U.S. VI since 1954. The Love City, named for the relaxed island of St. John, is a product of Swiss craftsmanship and Virgin Islands design. Entrants on all 10 Round the Rocks yachts received HIHO Suntek Shirts, from event sponsor, HIHO a British-Virgin Islands’-based clothing company. The HIHO owners will race in the Large Multihull and IC24 classes in STIR. In addition, the first 24 Round the Rocks entrants received a K3 Bluetooth Outdoor Speaker.

STIR It Up! Class Preview

Sixty-seven yachts – ranging from 16-foot beach cats to 60-foot gunboats and with crews hailing from five Caribbean island nations, the U.S., Canada, South America, Europe and Australia – will race in the 43rd STIR. The fleet is divided into eight classes, in which winning skippers received exquisite limited edition timepieces called Squall the Tradewinds, from Cardow Jeweler.

Here’s a sampling of highlights to watch for in each class:

Spookie’s Benjamin is looking to defend his win in the CSA 1 class. If the speed and crew work seen today at the Round the Rocks Race is any measure, Benjamin has an excellent shot at making it two in a row. Benjamin, who was named 2015 Rolex Yachtsman of the Year is sailing his ‘new’ Spookie, a TP 52, rather than the same-named yet Carkeek 40, yacht he sailed in last year’s STIR.

Another yacht with a shot at a podium finish in this class is Antigua’s Bernie Evan-Wong, who helms his RP 37, TAZ.

“TAZ is an all carbon and rates with a 60-foot boat, so we have to get everything just right. Because of the need for precision in tuning, we are still learning the boat. Get it right and she is a rocket, get it a bit out and she is a dog!” says Evan-Wong, who is sailing with nearly an all women crew including his daughters.

Tschuss, a brand new MAT 1180, designed by Mark Mills and built in Turkey by MAT yachts, is a first-time contender in this class and in STIR.

“After competing in the last three St. Barth’s regattas and having chartered for the events, Christian (Zugal) commissioned the building of this new yacht for the 2016 Caribbean regatta season,” explains Eamonn Rohan, who is running the program for his Cork, Ireland-based brother-in-law, Chris Zugel. “We are entered into the St. Thomas, BVI and St Barth’s regattas and hope to return next year.”

“I raced the first two years that I did STIR on my 82-footer, Ayana. Then the last three years I’ve chartered, hoping to find a boat better adapted to sailing in the Caribbean regattas. We finished third in class in St. Maarten earlier this month, and I think it was a good tune up for us for STIR,” says Corr.

A tough competitor for Corr in this class is Baker and his Team Magnitude-El Ocaso.

“Our crew is from Southern California with a Tortola-based Tactician, Mark Plaxton.
Last year we raced The True in St. Maarten for a win in our class with a sweep of all races. It’s the same crew that will compete in STIR this year,” says Baker.

This is the fourth time Lancelot II, a Beneteau First 40 available for race charters by Britannia Corporate Events in Hamble, UK, has done STIR. On board this year is a team from the UK called Supercharged Yachting. “

Supercharged Yachting are a London based group of friends who have raced together for a number of years on Reflex 38s and First 40s,” says Britannia’s sales manager, Prue Nash. “Jade Tokarcyzk is in charge. They have a small knitted cat called ‘Travel Vlad’ as a mascot who even has his own Facebook page ‘Vlad TheImpaler’ and he’ll be sending photos from the race course.”

In CSA 3, Puerto Rico’s Jonathan Lipuscek will be back aboard his J/105, Dark Star, to not only win this class, but also his weight in Cruzan Rum for best overall yacht on time.

“In preparation for this year’s STIR, we will arrive having sailed in two big competitive regattas, the BRISA Cup in Fajardo, Puerto Rico and Heineken Regatta in St. Maarten. For sure this will help us be ready to face the competition at STIR. Also, the boat owner, Jonathan Lipuscek, has spared no expense in making sure the boat is race ready,” says tactician, Rafael ‘Rafi’ Martinez.”

Dark Star will be up against long-time race favorite, Pipedream, a Sirena 38, skippered by the BVI’s Chris Haycraft.

“I have sailed in every STIR. Not with Pipedream, as she is only 31 years old, but on other boats as well. Every year means a lot of very fun moments,” says Haycraft.

“There is a lot of camaraderie among beach cat sailors. We help the newer sailors with rigging or go fast tips, we sail hard against each other, then hang out together afterwards. We set up camp at the far end of the beach next to our boats. Chairs. food, music, a shade canopy, and anything else we might want after a long day on the water,” says McKenna.

The biggest class of STIR 2016 is 17 one-design IC24s. Puerto Rico’s Marco Teixidor is back at defending champ aboard his Cachondo.

“Last year was a big win for me. Ever since my dad won the overall trophy in this regatta in 1999, I’ve wanted to win too. This year unfortunately I haven’t had a chance to sail in any of the regattas because I am studying in New York City for my MBA. The team has competed in some regattas to try and maintain form, with my dad skippering. Hopefully it will be enough to get our boat handling and speed up to par.”

Finally, STIR 2016 welcomes two new one-design classes: the Gunboats and VX Ones. Flow and Fault Tolerant will have another chance to compete head-to-head again. Twelve VX One’s will be on the line in St. Thomas. This group will also race in the BVI Spring Regatta as part of the first-ever VX One Caribbean Cup Series.

Where to Watch, Where to Party

Friday’s course takes sailors along the southside of St. Thomas, into the Charlotte Amalie Harbor, and then back east. Best vantage points to watch on shore are the Waterfront Apron and Frenchman’s Reef Marriott Beach Resort between 11:30 a.m. and 1:30 p.m. Ashore, live music starts at the STYC at 2:30 p.m. by the Third String All Stars, with Cool Session Brass taking over the stage from 7 p.m. to 11 p.m.

The competition continues Saturday, March 26, off the northeast and southeast side of St. Thomas. Then, party like a sailor starting at 7 p.m. at Yacht Haven Grande with Spectrum Band.

Racing concludes on Saturday, March 27, with the Awards Ceremony on the beach at STYC starting at 6:30 p.m. The Final Fling Party starts right after with Ah We Band.

For more information, contact Regatta Director Chuck Pessler at (340) 642-3204 or Email [email protected] For full information about the Round the Rounds and St. Thomas International Regatta, including results, photos, social schedule and more, please visit www.stthomasinternationalregatta.com.