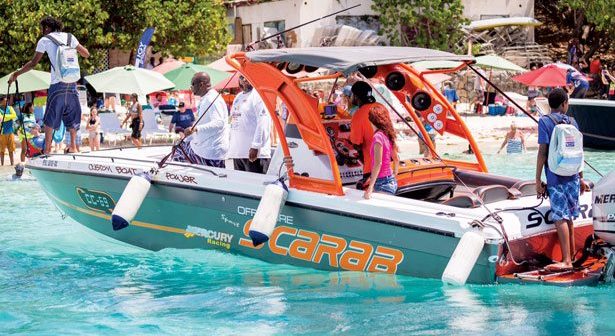 “I was taking a nap when all of a sudden my Dad yelled ‘fish on’,” says Richards, a 9-year-old third grade student at the Antilles School. “I jumped into the chair and started to wind it in. We could tell it was a big fish. It took a lot of struggle and pain in my hands, but it felt so good to see it come to the boat and catch it. I knew right then it would be the biggest dolphin of the tournament. I just had this feeling.”

Richards’ first place fish was about 26-pounds shy of the 55-plus-pound criteria to win the tournament’s ultimate prize – $25,000 in cash. The junior angler caught his first-place whopper in the morning, while in the afternoon he also reeled in the fourth largest dolphin, a 27.8-pounder.

Richards was one of three anglers on Mixed Bag. Fellow angler, Clay Gaffney, caught the 8th largest dolphin, which weighed in at 21.8-pounds.

Mike Holt on Anger Management landed a 28.3-pound dolphin for second largest, while John Clark, fishing from Emanuel, took third with a 27.8-pounder (which was 0.8 centimeters longer than Richard’s same weight fourth place fish). At 27.1-pounds, it was Bill Gerritsen aboard Marlin Etc, that caught the fifth largest dolphin. Also on Marlin Etc, David Cooper and Rob Barringer reeled in the sixth and seventh biggest dolphin weighing 26.0-and 22.2-pounds, respectively. Finally, it was Gilbert Laban on Emanuel who landed the ninth and tenth largest dolphin, 19.3- and 19.0-pounders.

The Best Boat award went to Emanuel, a 34’ Calypso, with the top collective catch weight of 83.1-pounds of dolphin. This is a repeat feat that the Emanuel team won most recently in the 2013 and 2014 Dolphin Derby. Capt. Alvin Turbe, Tamika Turbe, Gilbert Laban, Gerald Greaux, Jr. and John Clark were the anglers aboard Emanuel, which is a St. Thomas, U.S. Virgin Islands-based charter sports fishing boat.

“We fish hard and we cover a lot of ground,” says Capt. Turbe, as to the secret behind the Emanuel team’s success.

Nineteen boats and 80 anglers collectively caught 22 dolphin weighing in at 396.3-pounds. This conservation-oriented tournament discouraged the catch of dolphin that weighed less than 10-pounds.

Several boats donated fish to the host Virgin Islands Game Fishing Club, where this was the featured entrée at the Awards Dinner held April 25.