The story of the 70’ gaff ketch, Vendia, is a Cinderella story; a working girl rescued by a prince. Built in 1943 of oak at the Nipper Boatyard in Skagen, Denmark, she was destined for the fishing grounds of the North Sea and for nearly 30 years, her sturdy integrity kept the sea out and the herring in.

Decommissioned but intact, a composer recognized the boat’s potential. That prince, the first of several, conducted a long renovation. Fish holds were converted into accommodations, the wheelhouse upgraded and a new engine installed. Additional sails were added bringing the total sail area to 220 square meters. For Vendia’s second performance, she would carry a main, jib, spanker, mizzen and top sails- all needed for serious world cruising.

What happened next is a mystery but by 1982, ocean cruising included a stream of delinquent youth in need of rehabilitation through a program run by Den Maritime Base. Several students lived aboard for 10 months at a time. Their home and classroom was the ketch and sailing on her offered unforgettable lessons with the goal of providing a fresh start to life. She must have been an influential teacher because many troubled kids, sailing on the social-education project ship, developed in skill and self esteem.

The program grew, necessitating a bigger vessel and Vendia was left in Carriacou. Another prince, British surveyor, Frank Pearce, purchased the down-trodden boat but it didn’t take long to realize, he’d bought an overwhelming job. Ownership passed to Dave and Emma Buller; Mark Wibberley and Rich Tillotson joined on and by 2016, the boat had three owners- each with skill and adz-sharp humor.

They readied the boat to haul while awaiting the delivery of the Tyrell Bay Marina boat lift. Wibberley recalled, “While the boat was floating, we cleaned her. She was in a shocking filthy mess; quite unfit for human habitation, let alone paying guests!” Finally, the lift appeared on island time and work began in earnest. Boatbuilders from Windward were summoned to help rescue the 73 year old patient. “Once she was hauled we stripped off the copper to asses the damage,” said Wibberley. “Then we had a very long drink.” After realizing that the tar paper underneath was the only thing keeping her afloat, it’s likely they had a few more.

The boat they jovially nicknamed, The Prison Ship, was on the hard for 6 months followed by 18 months at the dock. Lists recorded what to save, what to replace and which was longest is still a debate. The owners introduced the Windward chaps to steam bending planks. “They were initially skeptical,” said Wibberley, “but by the end they were coming to us with steaming requests.” They fashioned a 20 foot box, constructed of aluminum roof flashing with a 45 gallon oil drum of water sitting in a fire pit. “Big planks of pitch pine, 20 inches wide, were brought in and convinced to take on a new shape. It seemed to work ok.”

The wheelhouse was gutted, mizzen overhauled and engine replaced. Bitts were rebuilt, the windlass repositioned and new supports were made for sheet blocks. 350 feet of 2 inch planking went into the boat along with 3500 new fastenings. Buller proudly described the caulking job, “It was done with oakum by one of the local boys, Calvin Patrice. He was 83!” 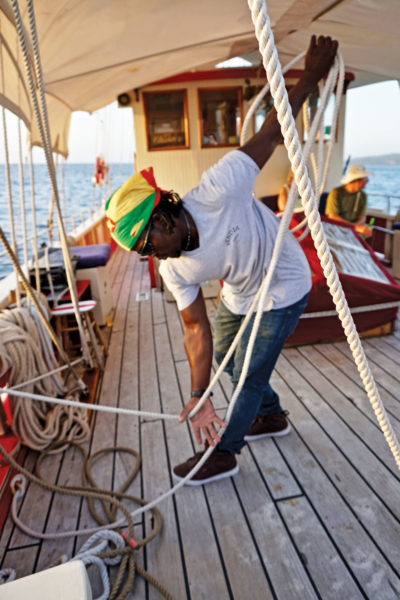 The owners like to joke about the dark days. “We were told by the original owner that there’d be a couple planks and some caulking needed,” said Wibberley.  “I got up for breakfast one day and there was a big hole in the boat- I could have sold chips through it!”

Gleaming with red paint, the trio sailed their accomplishment to Grenada where they noticed termites parading from the mainmast. Out it came and a hunt began for telegraph poles. “We had to get two because we couldn’t find one long enough,” Buller said.

Cinderella sailed to Antigua for the 2018 Classic Regatta where she was as popular off the water as on. Her adoring owners hosted ‘Vendia’s EPIC Dock Party,’ and it was all of that plus more. On prize-giving night, The Comfort Zone Trophy for 1st in class came their way along with the Woodstock Boatbuilders Award for best restoration.

The red beauty is back at work in Grenada offering day sails, sunset trips and special event excursions including weddings and parties. In April she chartered back to the Antigua Classic Yacht Regatta and the 2019 summer is lining up to be full of Adventure Sails you’ll want to be on. If that doesn’t entice you, the little ship’s signature cocktail will. Just one Vender Bender and you’ll return for more- but don’t dare ask for the recipe!