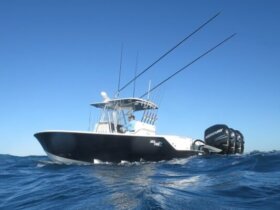 So you are in the market for a new outboard motor for your dinghy?

How would you like to have an outboard motor that never needs choking or priming?

Or how about an outboard motor that will start easily even when cold and would not need a gas tank that can spill fuel over your deck and water?

What if you could have an outboard motor that would run on half the fuel you would regularly use and you would never have to deal with a gummed up carburetor again?

Such an outboard motor does exist – and it runs on propane.

“These motors start easily, requiring no priming and burn cleanly.”

You are probably used to seeing city buses and garbage trucks that are modified to run on environmentally friendly and cost efficient propane, but you probably have not seen or thought of propane outboard for your dinghy. Captain Bernard Herzer of LEHR Incorporated brought the concept to reality.

While at work at sea, Capt. Herzer thought that converting the small gas generators aboard his research vessel would make for much cleaner, safer and more reliable conditions for his crew. He researched a workable conversion, and LEHR was born. Originally he applied the concept to small engine tools such as trimmers, blowers and other garden equipment but outboards were a natural progression.

The company’s smallest, the LP2.5, is a two-and-a-half horsepower four-stroke outboard with a 15- or 20-inch shaft. It weighs only 37.4 lbs and can run on a 16.4 “camping style” propane bottle or a remote 5 gal propane tank (the same as used on many BBQs) with a supplied hose for longer range. It is a pull start just like all other 2.5HP gas outboards and has forward and neutral gears (just spin the motor around for reverse).

The LP5.0 is 5HP four-stroke propane outboard and is currently their largest model (a 9.9 will be available soon). It operates the same as its little 2.5 sibling with the exception of a reverse gear on the tiller. It weighs in at 49.6 lbs for the 15-inch model and 52.8 lbs for the 20-inch model.

How much does a Propane Outboard Engine Cost?

Prices of both models are comparable to their gasoline competitors ($1049.99 for the 2.5HP short shaft and $1699.99 for the 5HP short shaft) and can be purchased at dealers and big box retailers such as West Marine www.westmarine.com. Each propane outboard motor comes with a 3 year limited warranty.

What is the Range of a Propane Outboard Motor?  How does it compare to Gas?

These propane outboard motors are reported to burn their fuel more efficiently than a comparable gas motor, and range on a 1 pound bottle of propane would equate to a little over a gallon of gasoline. A tank such as those used in many home BBQs would equate to more than a standard 6-gallon remote gas tank, without the safety risks of gasoline. Compound this with the fact that the cost “per gallon” is cheaper than gas and it makes a strong case for propane outboards. These motors start easily, requiring no priming and burn cleanly. They do run a little noisier than a standard four-stroke but the advantages of these motors far outweigh the negatives.

So while on your quest for the perfect outboard motor for your dinghy consider a propane motor. It is new technology that will keep you from having to use those oars.