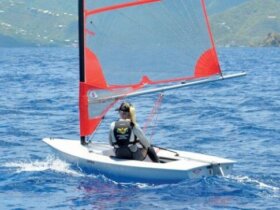 St. Thomas, U.S. Virgin Islands (November 28, 2012). Twelve Open teams representing some of the best match racers in the world, both men and women, will put their skills to the test in the 5th Annual Carlos Aguilar Match Race (CAMR), presented by Ulysse Nardin / Trident Jewels & Time, December 5 to 9, 2012.

Homegrown talent will be among the toughest and include America’s Cup winning helmsman and 2009 CAMR winner, Peter Holmberg.

Other skippers that will vie for the championship include the USA’s Dave Perry and Chris Poole, Germany’s Sven-Eric Horsch, Brazil’s Henrique Haddad and the USVI’s Tyler Rice.

The winner of the British Virgin Islands’ Pete Sheals Memorial Match Race, set for December 1 to 2, will also receive an invitation.

Past winners of the CAMR read like a Who’s Who of sailing: Finland’s Staffan Lindberg won the Open Division in 2011, while the USA’s Genny Tulloch triumphed in 2008 and 2010 and France’s Claire Leroy in 2009 in the Women’s Division, and it was the USVI’s Taylor Canfield in 2008 and Peter Holmberg in 2009 and Portugal’s Alvaro Marinho/Seth Sailing Team in 2010 that won in the Open Division.

The race format will be a double round robin where the top three teams move forward. The remaining teams enter a repechage event where the top two teams advance. This offers everybody two tries to make it into the finals.

Match racing pits one identical boat against another on a short course oftentimes near to shore. On-the-water umpires make instant calls and enforce the rules. The result is very exciting racing up and down the Charlotte Amalie waterfront where spectators can enjoy tented bleacher seating. The CAMR will feature live commentary on the waterfront and a live webcast on www.carlosmatchrace.com where a global audience is expected to follow this nautical chess match. Racing starts at 9 a.m. (GMT – 4 hrs) daily.

Satish Alwani, co-owner of Trident Jewels & Time, the exclusive Ulysse Nardin dealer on St. Thomas, says, “We welcome the competitors to St. Thomas. We are proud to make this event possible for the fifth year and invite our visitors to watch some great match racing off Charlotte Amalie, a town that is also known as the shopping capitol of the Caribbean.”

For more information and to download photos of last year’s event for editorial use, visit: www.carlosmatchrace.com