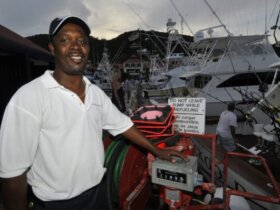 St. Thomas, U.S. Virgin Islands (December 6, 2012). Two skippers finished with only one loss after the first day of sailing in the 5th Carlos Aguilar Match Race (CAMR), presented by Ulysse Nardin/Trident Jewels & Time. The USVI’s Peter Holmberg, who won this event in 2009, sailed to 7 wins while the USA’s Sally Barkow, the 6th ranked woman match racer in the world, finished the day with 6 wins. Barkow made it to the Finals last year where she narrowly lost to Finland’s Stefan Lindberg.

Teams ending mid to upper fleet after the completion of 13 of 19 flights in the first round-robin included the USA’s Dave Dellenbaugh with 6 wins, the USA’s Chris Poole with 3.5 wins and the USA’s and USVI’s Dave Perry and Tyler Rice, respectively, with three wins apiece.

“We won our first match against Dave Perry and were pretty excited and then lost the next three,” explains Rice, a 2010 Antilles School graduate and junior at Brown University, in Providence, RI, where he is majoring in environmental economics. “We came back to finish out the day with two wins. We haven’t all sailed together as a team before, so there was a learning curve to work through with communications and tactics. The racing was so close today that we found out we couldn’t let an opponent split away without covering them or they could catch a different breeze and sail right past. That’s what happened to us in two matches.”

Rice, an up-and-coming Virgin Islands’ match racer following in the illustrious footsteps of fellow islanders such as Peter Holmberg and Taylor Canfield, is sailing with two members of the Antilles Sailing Team as crew: Taylor Ladd and Ian Coyle. Other crewmembers include St. Croix’s Peter Stanton and St. Thomas’ Chris Rosenberg.

No team went win-less for the day. Brazil’s Renata Decnop also finished the day with three wins, while the USA’s Stephanie Robles, Brazil’s Henrique Haddad and Germany’s Sven-Eric Horsch each ended with two wins. Denmark’s Lotte Meldgaard Pedersen rounded out the 11 team with one win.

“We match raced for 6 to 7 years, then took a break, and just started back again in July,” explains Germany’s Horsch. “We won the German Nationals and placed third in two Grade 3 events which really boosted our ranking fast. Our goal is always to get into the Semi Finals, but there is a high level of competition here which is good. In fact, there were two close calls by the umpires today that decided against us that could have easily gone the other way. That’s how close it is out there.”

This four-day regatta, sailed in Inter-Club (IC)-24s, will continue Friday. The Semi-Finals will take place Saturday and the Finals on Sunday. The Finals will be broadcast live locally on WVWI (AM 1000).

Up for grabs is a distinctive Ulysse Nardin precision timepiece for the winner.

A group of Virgin Island’s youth will have an opportunity to try-on match racing during the Carlos Aguilar Match Race Youth Regatta, which will take place between 11:30 a.m. and 1:30 p.m. on Saturday.

Match racing pits one identical boat against another on a short course oftentimes near to shore. On-the-water umpires make instant calls and enforce the rules. The result is very exciting racing up and down the Charlotte Amalie waterfront. Spectators are invited to watch the racing under tented bleacher seating where there will be live narration. Viewers around the world can watch via a live webcast on www.carlosmatchrace.com. Racing starts at 9 a.m. (GMT – 4 hrs) daily.

Daily race results and copyright-free downloadable images by Virgin Islands-based photographer, Dean Barnes, will be available for editorial use on the official event website (www.carlosmatchrace.com).