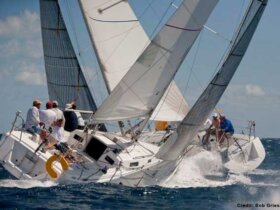 Headlines on the International Sunfish Class Association website broadcast the news of Puerto Rico's Fernando Monllor's win by a whopping 26 points at the 2011 Sunfish Midwinter Championship, held March 16th to 19th at Fort Walton Yacht Club, in Florida. This isn't the first time the 17-year-old sailor from Ponce has made news with his sailing talents and it won't be the last. Monllor's win earned him an entry to represent Puerto Rico in the Sunfish at the Pan-American Games in Mexico this summer.

It was the Sunfish that Monllor first learned to sail at age six. He and his father would head out on the nearly 14-foot normally single-handed sailboat just for fun. Two years later, his parents enrolled him in the Ponce Yacht and Fishing Club summer sailing camp where he learned to sail Optimist dinghies. His talent and natural ability was evident early on. Monllor won the Optimist regatta held at the conclusion of his first summer camp.

"He loved sailing and he loved the competition," says Monllor's mother Ivette, who adds that her son's love of the sport has influenced brothers Alejandro and Miguel as well. "There was no turning back after that and he hasn't stopped sailing since."

Monllor enjoyed a wildly successful Optimist career. For one, he won the Scotiabank International Optimist Regatta in St. Thomas in 2007. After this event, he competed in the Optimist South American Championships in Peru where he finished in the top 20 – with a broken arm! He concluded his Optimist career in 2008, finishing 22/204 at the Optimist North Americans in Curacao and 18/250 at the Optimist Worlds in Turkey. He also was a member of the Puerto Rican Optimist Sailing Team that won five consecutive continental team-racing titles.

The next stop in Monllor's sailing career was the Sunfish. "I chose the Sunfish because this was my first boat. It's also a boat I could sail successfully and compete in, in the Central American and Caribbean Games (CAC) and in the Pan American Games given my weight, height and experience."

Monllor's success in the Sunfish to date has been amazing. Two years ago he sailed his first Sunfish Midwinters and finished Top Junior and 16th overall. Last year, in the same event, he again finished Top Junior and improved his overall finish to 8th place. This year he won the event. Monllor has also sailed in the Sunfish International Youth Championships in the Bahamas where he finished 2nd overall, the Sunfish Worlds also in the Bahamas where he ended 54th, the Sunfish South Americans in Columbia where he scored 14th overall, and in the Sunfish Class in the Central American & Caribbean Games in Mayaguez last summer where he finished sixth. Since then, Monllor has been training for the Pan-American Games by competing in all major Sunfish regattas in the U.S. and South America, which included the Midwinters in Florida that he won.

What's daily life like for a teenager
this dedicated to sailing?
"He trains on the water Wednesdays, Fridays, Saturdays and some Sundays," tells his mother. "On Mondays, Tuesdays and Thursdays he does physical training and weights. He also has to make sure he's eating healthy and keeping up his weight, and he is studying often in preparation for SAT's and other college entrance tests. He is currently inclined to a college in the northeast and looks forward to college sailing, but he still has another year of high school. In his spare time, he enjoys kite-surfing, windsurfing and longboard/downhill skateboarding."

This summer, Monllor will split his time between sailing in the Pan American Games in Sunfish and crewing for Puerto Rico's Raul Rios in the International 420 to represent Puerto Rico at the ISAF Youth Worlds in Croatia.

His ultimate sailing goals are the 2016 Olympics in a double-handed boat.


"I like the freedom," he says. "I love to be out there in control of my boat and enjoy nature. I don't have words to describe it; it just feels good to sail, to play the wind, to be in the water. I am lucky to have been born and raised in Puerto Rico where the wind is always perfect and the water always warm, the view always amazing. Also, I've been lucky to represent my island and sail around the world, which has been incredible. But, I think the best part is that I can enjoy sailing with my family."