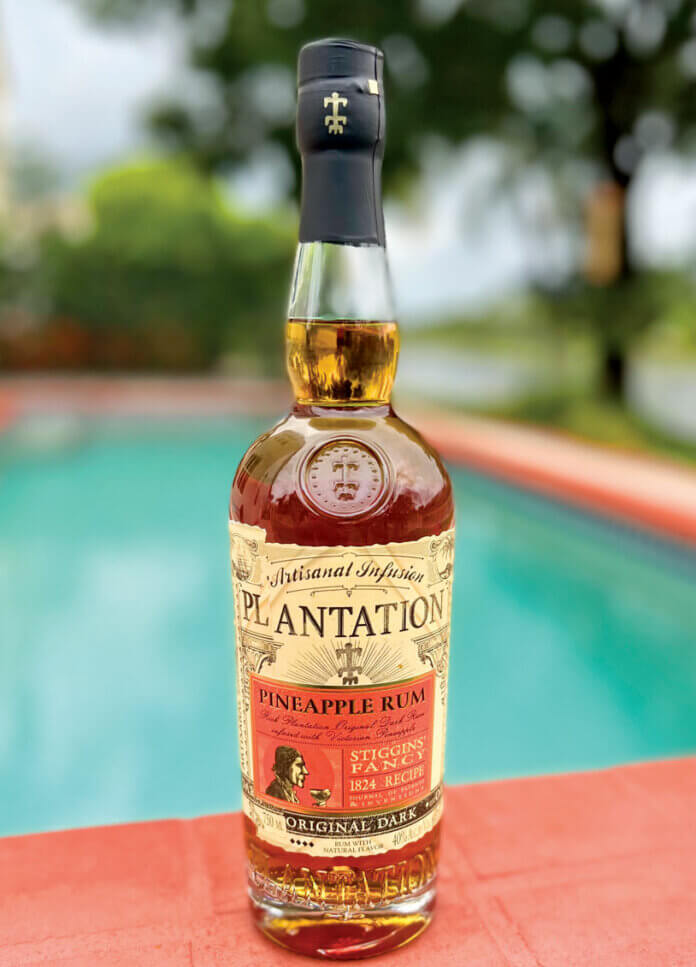 We typically steer clear of flavored or infused rums but when we passed a pineapple-infused rum made by Plantation, we knew we had to try it. Alexandre Gabriel, the man behind Plantation, produces rums all over the world using local ingredients. Any Plantation rum we have tried has not let us down so why would we expect anything different here?

Pineapple rum was the drink of choice in 19th century England but like most good things, the love affair came to an end. However, if you’re a fan of Charles Dickens’ Pickwick Papers you know that pineapple rum was the drink of choice by “esteemed” Reverend Stiggins. “Well esteemed” may have been going overboard. While Rev. Stiggins was preaching temperance to his followers, he was sitting at Mrs. Weller’s pub sipping free pineapple rum.

With help from historian David Wondrich, Plantation set out to revive the original cocktail from the early 19th century. Using the 1824 English Journal of Patent and Inventions and the 1844 Journal of Agricultural Society as their main sources, they combined a few traditional techniques they learned along the way, to create a drink worthy of Rev. Stiggins.

Plantation Pineapple Rum is made with ripe Queen Victoria pineapples that are infused into Plantation’s Original Dark Rum for 3 months. Once infused, the pineapple rinds are macerated, placed in the rum, and distilled. This bottle was made in Barbados so two columns and pot stills were used. Other distillation sites are Jamaica and Trinidad.

A beautiful copper color liquid coats the glass leaving long legs along the sides. The nose is similar to smelling the rind of pineapple to see if it’s ripe. Its earthy notes have some raw almonds and hints of pineapple. It’s not sweet. The palate gives away its young age; however, once you get past the slight alcohol burn, there are many flavors to explore. The first is butterscotch followed by cloves and bananas. The pineapple comes in late but doesn’t dominate the palate. Baking spices (cinnamon, nutmeg, and cloves) finish this rum in our throat and leaves a very satisfying warmth. We then added an ice cube to help balance the alcohol note. The rum significantly changed creating a hardier mouth feel and opening up the sweetness of the pineapple.

Shaken and served in a martini glass.

Wow, this tastes like a completely different rum. The lime really pulls out the pineapple without making it overly sweet. The biggest change is the baking spices. It’s reminiscent of a mulled cider.

Overall
As Terry finished the daiquiri, Clint consumed more neat. We both enjoyed this infused rum because of how it changes depending on how you sample. At $35/bottle, Plantation Pineapple Rum is a wonderful rum to sip alone or share as a cocktail with your book club.