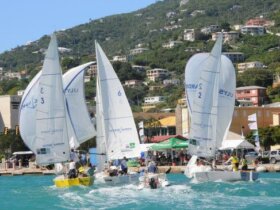 The Sint Maarten Yacht Club has just confirmed that both Peter Isler and Peter Holmberg will compete in the Budget Marine Match racing Cup which will take place on Tuesday March 2nd 2010.  This event is in its second year and has quickly become an event that is drawing the sailors to the island.  The Match Racing Cup takes place just before the St.Maarten Heineken Regatta and is a great opportunity for sailors already attending the regatta to compete in one more day of racing and with cash prizes totaling $10,000; the event is drawing a lot of attention from fellow sailors.

Peter Holmberg, native of St.Thomas and the winner of last year’s first ever Budget Marine Match Racing Cup will once again attend and defend his title as overall winner.  Holmberg’s list of sailing accomplishments is significant with a silver medal in the 1988 Olympics and a second place in the Louis Vuitton Cup in Aukland New Zealand.  Peter Holmberg also placed first in the 32ndAmericas Cup in 2007.  With quite a stellar sailing CV it is no wonder he took top honors in the 2009 event.

Peter Isler will also attend the event and will prove to be a fantastic competitor for the other crews.  He is a two time Americas Cup Winner, and participated in five Americas Cup campaigns.  Two time Maxi Class World Champion Isler has sailed aboard Pyewacket, Rambler, Titan 15, and Moring Glory to name  just a few of the top notch racing boats he has worked.  Peter’s commitment to sailing is evident in his many other “jobs”, as an author of “Sailing for Dummies”, as well as a regular contributor for Sailing World Magazine.    Besides being an accomplished sailor Peter also puts time aside to sing in a band “The Water Brothers” and has quite an eclectic taste in music.

This matchup between the two Peter’s is one that all eyes will be on, but do not forget that there are six other competitors in the Budget Marine Match Racing Cup, of which one of them will be Eugeniy Nikiforov, ranked 45th  as an ISAF Match Racer placing 1st in the Ekaterinburg Cup-a qualifier for the YAVA Trophy Ekaterinburg Russia.  Nikiforov participated in the event in 2009 and placed 3rd overall.  Other confirmed participants to date are Colin Rathbun, Chris Nesbitt, Marc Firtzgerald  and Jakub Pawluk.  There is still one spot left for those who are interested in qualifying.  For more information contact the regatta organization at [email protected] for more information or send your sailing CV directly to be considered for the final position.