Perfect Your Kite-Surfing Skills at the Cabarete Pro Series 2016 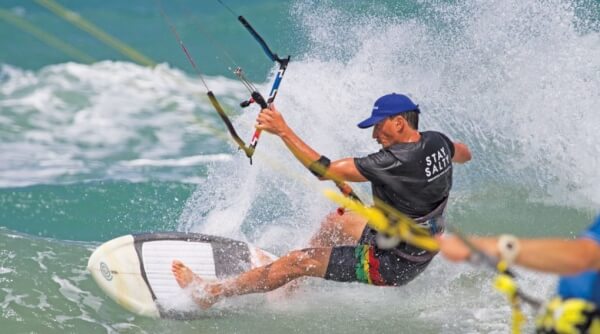 Norm Morris was so stuck in a time warp when it came to his kite-surfing skills that he thought of giving up the sport. Then Morris, from Toronto, Canada, decided to travel overseas to attend a clinic coached by some of the best riders on the planet. The result? “The clinic led me to a renewed love for kiting,” he says.

Morris is one of a group of kiters who will travel to Cabarete, in the Dominican Republic, this winter for the Cabarete Pro Series 2016.

“Cabarete, I believe, offers the best kite-surfing in the Caribbean as the large island creates its own micro climate with strong consistent winds and the Atlantic doesn’t disappoint with waves,” explains Andreas Lagopoulos, owner of the Cabarete-based Uncharted Kite Sessions, who hosts clinics with professional kite-surfers in global locations and now in the Caribbean.

“The north coast provides some of the best and most varied wave conditions in the world. There are beach breaks, reef breaks, flat water inner reefs and river mouths, hidden coves, and mangroves that grow out of the jungle into the sea creating every color of blue in the spectrum.”

Uncharted’s kite clinics uniquely feature a top pro that has either been a world champion or is currently one of the top ten riders in the world. In January, this was current and three-time world wave riding champion Jalou Langeree, from the Netherlands. The Pro Series hosts Brazilian Sebastian Ribeiro, a top three finisher on the KRP tour, for two sessions, February 8th to 12th and 15th to 19th. March 7th to 11th, four-time British National Champion Lewis Crathern will be the pro coach.

“You don’t just show up at 1pm, get some coaching and go home. All meals are included, and this is very much part of the clinic experience. A lot of kite knowledge gets passed at meals, and you also get to know the pro, and the other people on the clinic beyond a superficial level. Clinic participants often comment that they came to become better kite surfers, but didn’t expect to make lasting friendships along the way,” says Lagopoulos.

The clinics are centered around improving technical riding ability.

“How to move the kites on the waves and techniques to make the ride easier are skills I’m looking forward to teaching,” says February pro, Ribeiro. “There are usually people who want to ride strapless for the first time. I coach advanced riders in strapless freestyle.”

Morris is looking forward to working on his overall unidirectional skills. In addition, he wants to learn to tack and jibe as well as start jumping. March’s pro, Crathern, is famous for jumping the Brighton Pier in his native England.

“Jumping is my major passion so my aim is to make sure all my participants are jumping with a good technique and knowledge of how it is working. I’ll work on their edging skills, airborne position, landing and much more. Transitions are also great fun and I’ve spent a lot of time studying how this move is done. For the riders that feel more confident with boosting, I have many more tricks to teach them which will improve their overall ability,” says Crathern.

“Most kiters take lessons when they first learn and then completely stop taking lessons. They do improve, but they do so inefficiently thru trial and error. Additionally, they can become stagnant and stop improving like I did. I am a big believer in accelerating the process through yearly clinics where you are forced to focus on progress,” Morris says.