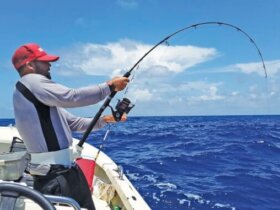 St. Thomas, U.S. Virgin Islands. The release of three blue marlin put Peje, a Puerto Rico-based 47-foot Cabo, at the top of the leader board after the first day of fishing in the 40th Anniversary USVI Open Atlantic Blue Marlin Tournament (ABMT) or ‘Boy Scout Tournament’ nicknamed for the event’s chief beneficiary.

“We saw three fish and caught three fish,” says Peje owner and angler, Carlos Garcia, who spent the day fishing off Anegada. “They were little fish, beautiful fish the way they jumped.”

Garcia caught the first blue marlin aboard Peje, with fellow angler Jose Pazos releasing the next two, which also landed him in the lead for best angler.

Meanwhile, it was CJ McLaughlin from Lighthouse Point, Florida, who caught the first blue marlin of the tournament off the 58-foot Paul Mann, Alina, while fishing on the North Drop.

“It was amazing,” says McLaughlin. “This is the first time I’ve fished in this tournament and I was lucky enough to hook-up the first blue marlin only 20 minutes after lines in. It was a small marlin, about 100-pounds and I made a clean release in about 5 minutes”

Fishing counts double for the Alina anglers, who are fishing as Team Coral C in The Custom Shootout, a series of four major tournaments in the Bahamas, Florida and Maryland as well as the U.S. Virgin Islands’ ABMT.

The release of a second marlin later for the day put the Alina in third place, while the 57-foot Spencer, Trophy Box, is in second thanks to a double header released earlier in the day.

Today marked the first that Capt. Ronnie Hamlin released his first blue marlin as an angler in a tournament. Hamlin, who was fishing from local charter boat, Marlin Prince, a 45-foot Viking, holds the record for most billfish caught in his career as a captain – nearly 23,000 and still counting. Hamlin also started his career at the helm in St. Thomas in 1972, exactly 40 years ago this year, and is fishing with good friends and fellow anglers, Tim Choate and Stewart Loveland.

“We had one bite today and I was fortunate enough to catch it,” says Hamlin. “It came up on pitch bait with its whole body out of the water just before noon and I had it released in less than 10 minutes. It was tremendous.”

A total of 21 blue marlin were released by the twenty-six boat fleet.

The angling action continues Wednesday, Thursday and Saturday – three days before and a day after the month’s full moon.

The public can catch the spirit of the sport by walking the docks and watching the big rigs come in around 6:30 p.m. The number of flags flying from the outriggers indicates the number of marlin released by that boat for the day. Anglers in this conservation-oriented tournament have not killed a blue marlin since 1986. Commemorative tournament T-shirts, hats and more with original art designed by famous marine artist Guy Harvey will be on sale each night of the event.

On Thursday, starting at 7:00 p.m., enjoy Cheese Burgers in Paradise. The Boy Scouts invite visitors and locals alike to their cookout at Camp Wahoo, located under the AYH tents. Tickets are available for the meal as a donation to the V.I. Council, Boy Scout of America.

The ABMT’s Awards Ceremony takes place Saturday evening along with the naming of the 2012 USVI Open/Atlantic Blue Marlin Top Angler, who pockets a $10,000 cash prize.