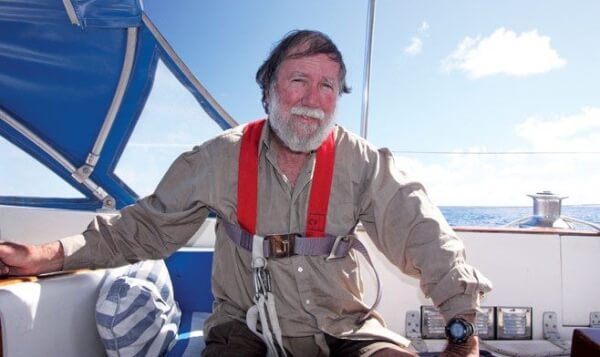 Each evening, my wife Carolyn and I stroll the streets of Papeete in search of adventure. We almost always find it. Tahiti is an enthralling isle, the only place on our planet where so many sailors jump ship that you have to post a bond of US$1800 per person to step ashore.

Yes, like the lust-crazed crew of the Bounty, it is easy to lose one’s head here in the Society Islands—to adore them so much you do foolish things to stay.

Our ketch-rigged Wauquiez 43 Ganesh is stern-to the dock in bustling Papeete. We are only a two-minute walk to world class bakeries, a giant farmers market, and numerous hyper-marchés. The best parts of Europe are here, and the best parts of ‘au natural’ Polynesia are here as well—with very few drawbacks to either.

We usually visit les roulouttes first each evening—mobile food vans that come down to the waterfront to feed the locals. They arrive around dusk, flooding the area with a rich aroma as well as a sea of tables, chairs, and boiling pots. The food is utterly delicious and relatively cheap for the Pacific. The portions are huge. It’s mostly a Tahitian family affair with mom and the kids meeting papa after work. There are about 50 of these ‘restaurants on wheels’ and each specializes in something unique and tasty. You eat and roam: a salad here, an entrée there, with some Chantilly crepes to top it all off.

There are four or five clumps of local musicians gathered along the perimeter of this huge, open-air dining area. They are unamplified, so they don’t interfere with each other. They are not asking for money nor accepting it. They are just singing their traditional Polynesian songs for the simple joy of it.

Their joyous voices intermingle with the heavy scent of flowers. Flowers are everywhere around us—to live in Tahiti is to breathe flowers. If you’re wealthy, you buy them pre-strung; if you are not, you merely reach out an arm. Every Tahitian vahine (female) carries a bit of wire in her purse to insert through the stem of the just-plucked flower and hold it firmly behind her ear.

Flowers are never inappropriate. The giant construction worker who wrestles with his jackhammer wears them around his hardhat, just as correctly as the handsomest island queen.

After a while, the scent of flowers makes you hear Polynesian folk songs, and the folk songs make you smell flowers.

Tahitians are fine, fine artisans, too. They dance. They carve. They paint.

It is difficult to describe precisely how the Tahitian women dance. I was standing next to some dancers waiting to go on stage a few nights ago and their hips kept sort of ‘twitching on’ in their eagerness to begin.

It is as if there are sensuous, honey-lubricated mini paint-can shakers in their hips. (The maiden’s dance is called the timorodee and is shocking enough—but the couple’s upaupa lacks only penetration.)

The Tahitians are flexible in the ways of love, in their art, even in their religion. They just melded their gods (like Tangaroa, the local King Neptune) with the Jesus-guy and all was well.

The nearby Fijians loved the missionaries because they were so tender and tasty, but the Polynesians love to party—even with the dourest of partners.

We attend church while in Polynesia, not because we’re religious but because we can’t bear to miss the singing. One fifty-member choir isn’t enough in Papeete; the Protestant church has four or five.

Family and village life are still important here. Whole swarms of children run laughing everywhere. Each child is a sort of demi-god—to be worshipped as well as nurtured. I’ve never heard a baby cry in Polynesia. The happiest, most respected adult in the village is the one at whose house all the children gather to play.

Is there a better way to obtain community status?

The Magic of Maupiha’a in the Society Islands

Love is in the air. The teenagers swoon with each other off in the shadows. Mom and Pop embrace in the middle. Grandma and Grandpa, too, are in each other’s arms … lust has no age limit here.

The Tahitians are beautiful people, even the men. Normally, I don’t think of men, especially massively built, super-muscular warriors, as beautiful. But the Tahitians have three sexes, and each is blended in different, unique proportions.

A Tahitian woman who looks so soft and inviting when at rest; that same women, as she aggressively flashes by in her outrigger canoe, looks considerably different.

The Polynesians aren’t sexist in the sense that the strong women work right beside the sweating men at hard labor—just as they do in Thailand.  (Also: the women inherit the land.)

Strangely, the women are only prohibited from fishing—perhaps to encourage matrimony.

There is almost no violent crime in French Polynesia, just petty thieving, much of which is a hold-over from centuries of communal living where ownership wasn’t an issue.

Fruit abounds. If you are both hungry and lazy, just wait a couple of moments and something juicy and full of vitamins will drop from the sky. There’s no stress. Tired? Lay down and sleep. Nobody tells anyone else what to do. Home is where your head rests.

As Carolyn and I stroll our way down the hushed waterfront, canoes flash by. The Tahitians have not forgotten their rich maritime past.

They still voyage all across the vast Pacific in their giant sailing canoes, and are currently planning a circumnavigation as well. Their main aquatic love, however, is paddling. They really love to paddle. Each evening, dozens of racing canoes are launched into harbor, and on the weekends, hundreds! They enjoy paddling singularly as well as in giant canoes with dozens of men. Groups of woman paddle too. Their bronzed bodies covered with honest, righteous sweat glisten. Their dripping oars flash. Sometimes they sing as they paddle.

A sudden gust of wind will blow flowers off the trees and into the water.

They are paddling through flowers singing songs of love.

She grins. “I hear you can learn a lot on School Street, you dog, you!”

I smile, and take her hand. She, too, has a flower in her hair.

The mahus (transvestites) and rae raes (gays) smile at us. A few are drug-addled and selling themselves—but most are just young lads in full bloom of sexual awakening—exactly like their sisters. There is no danger. Everyone is polite. No one is angry or resentful or threatening. Why should anyone be hostile when life is so sensuous and exciting and wonderful? They are beautiful and they know it. Some even sport beards along with their pearls, lipstick, and silky pareos. (The lines of homosexuality, trans-sexuality, cross-dressing, and transvestitism are completely blurred here.)

We come to the Garden of the Canoes, just west of the city center. Here, large groups of families and friends from the outer islands gather in an open-air home away from home while they visit their beloved capital.

We feel perfectly safe. There’s a group of drummers beckoning for us to join in. Avid ocean surfers, the kids take to skateboarding like fish to water. Bicycles whizz by. Laughter fills the air intermingling with the flowers and the folk songs. Ukuleles pluck. Guitars strum.

Wash-tub basses boom. The moon rises impossibly close—like we could reach out and touch it. Stars wink. Planets sparkle.

I take little sips of perfumed tropical air. Carolyn has never looked more beautiful. I am in perfect balance—for once, my head is clear and confident and unfettered.

“… you love Tahiti, don’t you,” Carolyn asks in a whisper as she tilts her face up.

I kiss her, nuzzle her, and take in her familiar scent.

How lucky can one man be?

“Yes, I do,” I say. “I loved it decades before I arrived, and I love it still … despite all our visits. Tahiti is always worth it, regardless of price.”

She smiles. “… you dog, you!” she says again. It is a family joke—a convoluted, crazy, mixed-up, goofy, insane family joke.