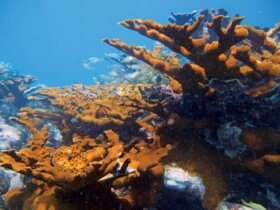 Floridians Care for Their Corals

Saws cutting through the best marine plywood, nails driven in staccato precision, and sawdust floating in a dense fog, create a nail-biting event that captivates thousands of onlookers each year. The National BoatBuilding Challenge in Georgetown, S.C. is for anyone who loves boats, carpentry and the competitive spirit.

Two-person teams build a 12-foot rowboat from scratch, in a 12’ x 15’ space. This four-hour competition separates the amateur from the expert. The boats may not look pristine, but they should be watertight to row it across the Sampit River. Four judges will award points in three areas: building quality, building speed, and rowing time.

There are several categories: adult, general builder, high school and college, competing for cash prizes. The entry fee is $100. Each team receives Carolina Bateau boat plans designed by “B” Coleman, owner of SeaCo Yacht / Ensign Boats based in Lexington, Kentucky.

Although boat building competitions have been held as early as 1981, there was a need for standardizing the requirements and bringing on sponsors like Atlantic Veneer and WoodenBoat magazine to bring attention to the art of boat building.

“The October, Georgetown event is a national one, and the teams coming from N.C. had to finish in the top three, which means they were the fastest and the best built. The quality element is a key one and very much drives the strategy during the build.  This is not easy to do, and the teams who win are in a class by themselves,” says Rob Dwelley, past N.B.B.C. Commissioner.

“I want to preserve and promote hands-on woodworking for simple global goals as we watch the younger generation use their hands on keyboards and not getting dirty, ‘building things.’”

Georgetown has taken this to a level I never thought would happen as they started their sailing program this summer in Opti Prams, but they built them.  They did not buy them!” says Dwelley.

To get to Georgetown, S.C.’s competition, the teams have already proven their merit. Regional contests have been held in Maine, S.C. and N.C. “Right now, there are only two real competitions in S.C. and N.C.,” says Dwelley, but he hopes to add other regions in the future, citing the need to pass on boatbuilding traditions.

Teams are given a one-day “tips and tricks” training session prior to the event. Contest rules state there will be no jigs, no sticks with measurements, or paper transfers with information on it. However, the plans omit critical angles and the radii for the knees, so preplanning and pre-building a boat is mandatory to win the competition; technique is everything.

Participants must bring all their tools and accessories, manual caulk gun, table, sawhorses, prebuilt boat mold and two oars from the requirements, and life jackets. The challenge committee supplies a 5-gallon bucket of nails, screws and tubes of adhesive.

Tom Russell, previous competitor, trainer and judge, suggests using a scrap piece of wood with the measurements on it, so that a typical 20-knot wind doesn’t blow away the plans. One team keeps their plans between the tabletop and a piece of Plexiglas.

Vic Fasolino, a N.C. organizer, firmly states, “Whatever the plans say, that’s what you do.” When the team finishes, one member blows a whistle and their competition is over; tools are put down. In the end, everyone wins; the teams keep the boat they built.

The Georgetown, S.C. National BoatBuilding Challenge will be held on Saturday, October 19, 2013, 12-4 pm, on the waterfront between Front and Broad Streets, in conjunction with the S.C. Maritime Museum’s Wooden Boat Show fundraiser. The event is free and open to the public. For more information, contact https://woodenboatshow.com/the-challenge/, or 843-520-0111.