ALL AT SEAThe Caribbean's Waterfront Community
HomeCruiseThe Caribbean Can be a Great Place to Visit in Summer &...
Cruise

The colder it blows up north in the winter, the greater the number of visitors book a trip south to the Caribbean. Many in fact plan ahead. For example, cruising rallies departing from the U.S. and Europe each fall deliver sailors looking forward to soaking up the sun during the months of December to April. However, the fun doesn’t end in the Caribbean come summer and fall. In fact, there are several features you can’t can enjoy other times of the year.

Off-Season Advantages
While the region’s weather often appears the same year-round, there are some delightful nuances to consider.

“Grenada has calmer seas in most of the summer months due to decreased trade winds so that’s a plus for anyone who suffers from sea sickness,” says Gary Clifford, owner of True Blue Sportfishing, based out of the Port Louis Marina, in St. George’s.

That relative calm extends north to the U.S. Virgin Islands, according to Oriel Blake, executive director of the St. Thomas-based Virgin Islands Professional Charter Association (VIPCA). “This opens up the North or Atlantic Coast of St. Thomas along with its magical and uninhabited cays off the furthest west point to charters. These anchorages are more tranquil this time of year from the lack of waves and people.”

Fewer crowds are definitely a bonus.

“There are no long queues since the cruise ships have moved to the Med and Alaska,” says Shane Macauldy, marketing, sales and events manager for IGY’s Rodney Bay Marina, in St. Lucia.

So too do rates drop.

“Yachting visitors interested in staying overnight on land will find an array of accommodations to fit their tastes at a fraction of the cost as pricing in the summertime is traditionally discounted up to 50 percent. Choose from sprawling resorts to guesthouses, room only to all-inclusive, family-friendly and adults-only, the Caribbean offers it all and everything in between,” says Sylma Brown, the New York City-based director of the CTO (Caribbean Tourism Organization)-USA, Inc.

Several marinas and boatyards offer discounts as well.
“Owners who want to leave their vessels in the Caribbean during the latter part of the summer can take advantage of our Rodney Bay Marina Summer Special. This offers favorable rates both for the marina and boatyard. Catamaran owners will be pleased to know that the catamaran surcharge does not apply for vessels taking advantage of our Summer Special,” says Macauldy.

Numerous festivals is another summer plus.
“St. Lucia can be dubbed the Summer Festival Capital of the Southern Caribbean due to the plethora of festivals taking place during the summertime. Imagine having a choice of over 100 carnival-related events to choose; events from late April to August,” says Macauldy.

Novel festivities, he says, are the two flower festivals: La Rose Flower Festival (August 30th ) and La Marguerite Flower Festival (October 17th). These are not your typical flower shows, but instead a pageantry of different communities dancing and singing while dressed up in the colors representing the two flowers; red and blue.

The Summer-Fall Sailing & Sportfishing Scene
Certain weeks are less popular than others for sailing and chartering, according to Dick Schoonover, who manages CharterPort BVI, in Tortola, British Virgin Islands. “July is primetime in the summer in the Virgin Islands. Down island, August is the traditional time when Frenchmen empty out of their offices and factories and head off on holiday, and you can see this in the marinas in Fort de France and Pointe-a-Pitre, and further down island for that matter.”

Charter yachts are harder to find, especially in the northern Caribbean, in September and October due to this being the peak of hurricane season. Many relocate ‘below the hurricane belt’ or southernmost Caribbean.

Sport fishing is a year-round activity, yet some species are in abundance at certain times. For example, off islands such as St. Maarten, the Virgin Islands and Puerto Rico monster-size blue marlin peak during the full moons in August, September and October.

“In Grenada, the summer and early fall is off season for billfish but having said that there are always some around. Yellowfin tuna are resident in our waters so they are always available. Wahoo are another target as are mahi-mahi,” says True Blue Sportfishing’s Clifford.

Summer Racing for Kids! Regattas Put Youth in the Spotlight 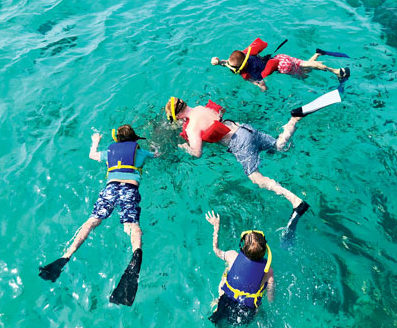 Go Below the Belt
Southern Caribbean islands such as Trinidad & Tobago, and the ABC islands of Aruba, Bonaire and Curacao are located south of the hurricane belt and therefore relatively out of the way of major storms. That makes these destinations a safer bet for visiting in the late summer and early fall. There’s the Aruba Regatta, August 16 to 18, and the Bonaire Regatta, October 9 to 12. Beyond this, there are other watersports available daily.

“The months of September, October and November typically have the lightest winds of the year, but it’s still possible to kitesurf,” says Ossie Garcia Lacle, owner of Kiteboarding Bonaire. Winds in the fall average 12 to 14 knots , compared to at least 10 knots needed to launch a kite and best conditions at 16 to 22 knots.

In the summer months, the tide is calmer, making snorkeling a must-do,” says Faranack Fazaeli, of Octopus Aruba, a company located near Palm Beach that offers snorkeling trips with the use of hand-held motorized scooters. “This is our high season, so when it comes to water-sports, island tours, night life, and restaurants everything is booming.”