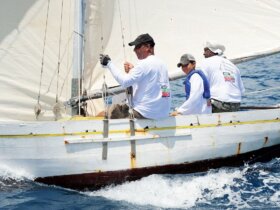 School’s almost out and kids can now enjoy full days of summer sailing. Yacht clubs and sailing organizations on several islands offer camps that combine sail-handling instruction with fun and games ashore. In addition, there are three major regattas upcoming where young people can test their skills against fellow sailors from throughout the region as well as the world.

Scotiabank is now in its 17th year and Regatta Director Cindy Hackstaff says, “We hope to host more sailors this year even though the economy is challenging because youth sailing provides wonderful physical, social and cultural opportunities for the kids.”

Junior sailors from 8 to 15 years of age are expected to compete in the Scotiabank Caribbean International Optimist Regatta from destinations including all three U.S. Virgin Islands, the British Virgin Islands, Puerto Rico, Trinidad & Tobago, St. Maarten, the Dominican Republic, Spain and the U.S. mainland.

What makes this event special, says Hackstaff, is that “We have an extremely high caliber of racing amongst the young sailors, plus we always have great sailing conditions. Many sailors use the clinic as a training experience and we also have a team racing event. Finally, we have fun activities and evening events that cater to the kids—and even the parents have a great time.”

The pre-regatta activities begin Monday, June 15th and run through Wednesday the17th, when top international coaches will teach a three-day instructional clinic led by Agustin ‘Argy’ Resano. “The clinic will run from 8:30 a.m. to 5 p.m. and have two sessions with meetings before going out and a video briefing after sailing.”

Final registration for the regatta takes place June 18th. In addition, those that register prior to May 15th will have their names entered into a special drawing to win top-notch prizes. The three-day regatta kicks off Friday June 19th. www.styc.net

The International Optimist Dinghy Association’s Optinam was first held in the Caribbean in 2005 in Tobago, and Curacao was last year’s venue. The Dominican Republic will host 2009’s event at Andres Bay, in Boca Chica, says regatta director, Eduardo Verdeja, “a beautiful tourist beach located at only 30 minutes from Santo Domingo City and 5 minutes from Las Americas International Airport.”

Verdeja says, “At the IODA Annual General Meeting held in Turkey during the 2008 World Championship, it was approved to invite the best team of each non American continent, making the Optinam a world event.”

The Hotetur Dominican Bay Hotel in Boca Chica is the official hotel for the event. It’s a 3 star all-inclusive resort with over 400 rooms distributed in 19 buildings, all equipped with air-conditioning and satellite TV, two swimming pools and several restaurants. The sailing venue is a short walking distance from the hotel.

The St. John’s, Antigua-based Caribbean Sailing Association (CSA) has long supported dinghy racing by sanctioning a number of Caribbean Championships as well as holding the annual Caribbean Dinghy Championship. This year’s regatta is tentatively planned to take place in Barbados.

Cary Byerley, CSA president, says, “What boats are sailed depends on the island that hosts the event. However, most islands will have Optimists and Lasers, as they are standard boats.”

The Caribbean Dinghy Championships have helped to develop junior sailing in the region. “For juniors, to be able to go to any event off their own island only boosts their knowledge all round,” says Byerley. “For me the most important side is that friendships are formed with kids from other islands that can and will last a life time. If I look at myself, all the Caribbean people I have met by going to other islands for dinghy regattas are amazing, and with most I am still in contact.” For more information, visit: www.caribbean-sailing.com