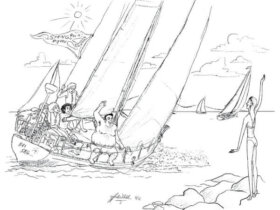 “The BVI qualified for five spaces. Mollee Donovan and Jason Putley (who are team BVI veterans after competing in OPTINAM ’08 in Curacao) were joined by Kairon Branch, Robert Poole and nine year old Ryan Wooldridge. Coach Chris was able to spend a couple of days with the team practicing starts and getting to know the sailing area off Boca Chica, just 20 minutes East of Santo Domingo.

“Just getting to the race area involved an hour-long sail along the beach inside the reef, past the commercial port and then two miles dead upwind to the middle of the bay. Not for the faint-hearted!

“Before the racing started in earnest, all 198 competitors with their team coaches, leaders, reps and a whole ensemble of families coached off to the Naval Base in the city for a grand opening ceremony. This was the first major sailing event to be hosted by the DR and they were very proud to show their colours. Five years ago they didn’t even have an Optimist fleet, but now their young sailors addressed the entire audience, proudly welcoming all their competitors in Spanish and English.

“After two days of racing, our team narrowly missed out on qualifying for the team racing event. Only the top 16 nations could race and we were 17th! Undeterred, we watched the action from the beach and learnt a lot just by watching. Team Peru managed to beat Argentina in the final after the fancied team USA only made the semis.

“The following day, Sunday, was a rest day so we signed up for a ‘truck safari’ into the hills. Fantastic fruit, busy and poor but happy villages, a monster waterfall, a cigar making competition and the best chicken soup any of us had ever tasted. After three hours bouncing around in the back of a dusty truck for the return leg, the team was happy to jump into the hotel pool before dinner.

“All the OPTINAM participants were able to stay in the Dominican Bay Hotel which made it a pretty lively place! Groups of young sailors getting to know each other, and swapping stories and experiences, is what the International Optimist Association is all about.

“At the award ceremony, team BVI didn’t feature in any of the prizes but our sailors did very well. They had great team spirit, none of them gave up in any of the races; they thoroughly enjoyed themselves and were also great ambassadors for the BVI. Mollee 126th, Jason 132nd, Robert 168th, Ryan 173rd and Kairon 190th.

“Absolutely full marks to the Regatta team in the DR whose 120 volunteers put on a nearly flawless event at the first time of asking. The RBVIYC, as the BVI’s National Authority for sailing, submitted a bid for the 2011 OPTINAM regatta, to be evaluated at a meeting during the Optimist World Championships in Brazil. ”