ALL AT SEAThe Caribbean\'s Waterfront Community
HomeCruiseOnboard Marine Alarms - Use Them!
Cruise

Since there is sooooooo much alarming news (medical, financial, and war) right now, I’ve decided to write a column about a subject that is dear to my heart—onboard marine alarms. I like ‘em and I use them often. In a sense, the more they worry, the less I have to. They are always awake, I’m often mentally dozing. 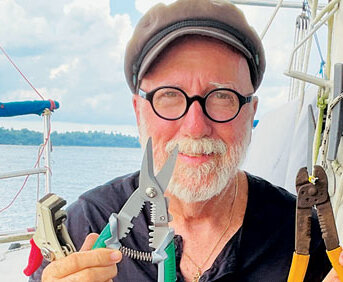 Example, my Perkins M92B diesel has an oil pressure and hi-temp alarm. Modern marine diesels are almost indestructible IF they don’t run hot or without oil. Either one, just for a few moments, can ruin a $20,000 engine. Thus, it is reassuring to know that, while my attention is elsewhere, these very specific, very focused alarms are totally focused on their job.

Even better, the oil alarm tests itself each time I switch on the engine (but before I crank it) and the hi-temp alarm is easily tested by grounding it out.

There are two additional notes about engine alarms. One, as useful as alarms are, they are no substitute for gauges. I’m not a fan of the idiot-lights—they too accurately describe their users. Gauges are important because you can, for example, see your engine temperature rise over time as your impeller degrades and discards its blades. Thus, gauges not only warn you, they warn you over a long span of time which can demonstrate the trend.

Ditto, oil pressure. Ancient oil will have a lower pressure in a tight diesel than new oil—especially at idle after running the engine hard for a long span of time.

When asked why I was so meticulous by my fellow convoyers, I’d answer truthfully, “Just because I’m poor doesn’t mean I’m stupid.”

Yes, if a wealthy yachtie blows an engine—they might be delayed in their circumnavigation for a couple of months—if I, with empty pockets, blow my diesel, it might set my circ back two or three years, or derail it entirely.

The second thing I want understood about engine alarms is that never means never. I know of dozens of sailors who have ruined their engine because they ran it hot or without oil “only for a moment” or “just a few more seconds to pick up the mooring” or “just to get into the slip.” That’s a no-no. There’s only one thing to do when an engine alarm goes off, and that’s to shut off the engine immediately.

…and then fix it before you restart it.

No excuses. No ‘only for an instant’ BS.

Since engine alarms have saved my butt numerous times during the last 62 years of living aboard and ocean sailing, they’re not the only two alarms I have aboard. My electrical system has both a low voltage alarm and high voltage one (if my alternator’s regulator fails).

While I seldom lock my boat while moored in one of the most densely populated cities in the world, most ports aren’t like S-pore. In nearby Malaysia, Indonesia, and Thailand I always set my burglar alarm. I cobbled mine together with a $17 relay circuit board from Amazon and two self-made sensors.

The first sensor is a simple pressure sensor I made from two strips of copper wrapped around two flexible sail battens—and fastened under my cockpit grate. If you step into my cockpit, the alarm rings—and it is almost impossible to get below on my boat with stepping into the cockpit. The second sensor is a tripwire I string aft—this one rings almost immediately if bad guys come aboard—obviously, the sooner the better in terms of self-defense.

Now, I’m often doing projects on my boat (or another vessel) and shore—and I often set my alarm without locking my boat if I’m just dashing away for a couple of moments. Also, at night I’m often ashore nearby at a restaurant, bar, or aboard another vessel. Thus, my burglar alarm’s alarm part is, perhaps, more thought out than most.

Not only does it set off an extremely loud (dangerously loud) audio alarm right in the ear of an intruder—it also sets off a number of surrounding strobes. Both of these make rational thought almost impossible—and fleeing blindly the best option.

However, these alarms have a major drawback—they can be smashed within seconds with a crowbar if the intruder has the presence of mind to do so. Thus, there are audio and visual alarms on my rig as well—so if, say, I happen to be looking out a window of a waterfront brothel, I’ll know my vessel is being broken into no matter how drunk or whacked I am. 😉

Obviously, since I’m a good citizen of the harbor, this alarm automatically shuts off after four minutes so that angry yachties don’t have to board my vessel with axes to chop the wires.

Complicated? Yes. But I’ve lived aboard for six decades in (mostly) foreign ports and have only had a major theft issue in the US of A.

Next up are my bilge alarms. These are extremely important offshore and, frankly, I’m amazed that every offshore yacht doesn’t have them. If they did, dozens of blue water vessels would not be lost each year.

The fact is that I need to know quickly whenever my vessel has almost any water leaking into it—so that I can immediately begin finding the leak. Finding a big or small leak is dead-simple if there’s only a few cups of water in your bilge—and nearly impossible if your floorboards are floating. Thus, I have two independently wired, switched, and fused bilge alarms—a soft but non-ignorable one, and a loud one.

Since I am, as stated, often off my boat but nearby committing some horrible sin under a cloak of darkness—the loud bilge alarm has a strobe and horn in the cockpit too.

Nearly anything electrical can be alarmed (or shut off after a period of time) these days. For example, your propane solenoid or bilge pump can ring if it is left on for more than an hour—ditto, your windlass so you don’t sail across an ocean with it on. (It’s best if your windlass doesn’t break your ankle as you deploy your Paratech sea anchor.)

Obviously, our Furuno radar has a guard alarm—which works most of the time at the close ranges. However, the fact that it doesn’t work 100% of the time makes me nervous. The risk of collision grows exponentially with each passing year.

My cheap Hummingbird depth meter has two alarms—one, if I drag into deep water, and another if I drag (or sail) into too shallow water. Plus, I have another independent anchor alarm which works off of our GPS position, not depth of water.

Perhaps the most important alarm on our 43-foot ketch Ganesh is our AIS, our Automatic Identification System. This is the single most important offshore safety advance in my lifetime, in my humble opinion. We love our Vesper unit—which is always transmitting both at sea and at anchor (in case we drag, are cut loose, and the entire boat is stolen (as was my Atkin’s double-ender Corina).

I would never think to go to sea without an AIS.

While the focus of this article is alarms—I’d be remiss if I didn’t point out we have an Apple Tag concealed in our dinghy; hint, hint.

Speaking of Apple, I also now wear one of their Series Seven watches which can communicate with many things on my boat (GPS, chart plotters, depths, etc). It can notify me with audio but also silently with vibration. Nice!

But our very favorite shipboard alarm is our WATCH COMMANDER. While it is very battered after 3.5 circs, it still works. The crewmember on watch keeps this unit in close proximity. Let’s say it is set for 12 minutes—at 12 minutes, a faint red-light glows. If nothing happens, a soft buzzer rings. If nothing happens again—a sonic alarm rings that will raise the dead; that is literally impossible for someone to sleep through.

This is particularly nice while close to shore after a long 48-day ocean passage (our longest) when we’re fatigued.

Plus, the Watch Commander can be easily reset for another 12 minutes AT ANY TIME with the press of a button, which is a huge advantage.

Anyway, those are a few of the alarms we have onboard—there’s more, I’m sure.

Any alarms for pandemics, financial ruin, or incoming ICBMs with nuclear warheads? Nope, you’re on your own, pal!

Sailing with Charlie – The Ring

Cap’n Fatty and Carolyn Goodlander are still chilling out in Southeast Asia—where groups of teenagers call people with white hair ‘uncle’ and ‘mother’ out of sincere respect—and the gourmet food is almost free.