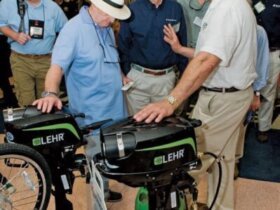 I was alone in the cockpit on a fairly calm night, sleep-deprived and fatigued, when nature called. I was fulfilling my goal of sailing singlehanded to Bermuda and, because the sea was calm with a light wind and a perfect moon in the sky, I mistakenly released the snap shackle on my harness from the jack line and leaned over the lee rail to relieve myself. I didn’t hear the alarm from the radar guard zone picking up a squall off the starboard bow. The autopilot held its course as a stiff puff of wind heeled the boat well beyond 30 degrees. I lost my grip on the bimini top, stumbled and fell into the sea. As I inflated my life vest, I watched my boat continue to sail on her course at six and a half knots. I was 500 miles from land in any direction and far from the shipping lanes, halfway from Tortola to Bermuda.

Then I awoke from my “overboard” nightmare.

The improvements in electronic sailing equipment over the last few decades have made it possible for people who would never have considered a lengthy singlehanded voyage to embrace the challenge. Autopilot, radar, chart plotters combined with GPS navigation, single sideband and VHF radios with DSC, and satellite telephone interfacing with the Internet have transformed what was once an arduous, dangerous adventure into a relatively tame experience.

Waking up every 20 minutes to check the horizon has given way to alarm systems for depth, radar guard zones, and DSC alerts. These advances have made it relatively safe for the single handler to get some adequate sleep, confident they will be alerted in the case of impending threats.

That is, of course, if you can hear high-pitched digital sounds.

Somewhere along the way to my present age (70), I lost just about all my ability to hear any sounds above mid-range. Perhaps it was hunting pheasant in Michigan or listening to loud music with earphones, but suffice it to say I can place either ear in direct contact with any digital alarm and hear absolutely nothing. While this kind of hearing condition is not widespread, various degrees of hearing impairment are common.

My boat, Autumn Passage, a 1982 Mason 43 Sloop, has a complete installation of Raymarine® equipment including depth, wind, speed, radar chart plotter, Autohelm®, and LifeTag™, all connected with the Raymarine SeaTalk crossover system. The entire array was installed by a top notch company located in the British Virgin Islands, where I have lived since retiring in 1999. Grant Ware from Cay Electronics installed the original system and has since made numerous modifications based on my individual requirements.

Whenever I sailed down island from the BVI or up to Bermuda with crew members who had good hearing, digital alarm systems were a great addition. But relying on alarm systems with a crew on board is a lot different than when sailing alone.

In early 2008, as I dealt with a rather complicated illness, I dreamed about getting well and sailing singlehanded. I thought, “If I ever get out of this, I want to sail my little boat by myself.”  I thought about my hearing problem … I had made my share of offshore passages with crews and understood the issue of sleep deprivation and fatigue.

But for me it was not just a matter of making the digital alarms louder, since no matter what the volume, I could not hear them. We had to find a way to make the alarms “analog,” say from a “tweet tweet” to a “whoop whoop,” if you will, or from a high frequency to a low frequency. I went to Grant with my problem.

Grant came up with the solution. He built conversion boxes for the various alarm systems. These boxes take the digital signals and convert them to analog, with different patterns for the different alarms. For example, the depth alarm produces a fast pattern, while the radar zone alarm produces a slower pattern. These signals are then sent to an amplified speaker which hangs above the aft cabin bunk, adjacent to the cockpit porthole. Even without this porthole open, when turned to high volume this speaker alarm will wake anyone anywhere on the boat.

On a recent singlehanded sail from the BVI to Bermuda, it worked flawlessly and using the chart plotter’s countdown feature I set the alarm for every two hours, even if nothing else happened, which allowed me a confident, secure two hours’ sleep at a time. On my next trip I’ll set it for three to four hours, based on the experience of this trip. The radar guard zone alarm also alerted me (from my sleep) to three freighters crossing nearby and numerous rain squalls.

For those not familiar with it, the LifeTag system consists of a small tag that attaches to your life vest (or wrist or arm) with a Velcro strap. Should the tag become separated from the boat, an alarm goes off in the boat, alerting the crew that a person has fallen overboard. The Raymarine system’s SeaTalk device marks the boat’s position as an MOB on the chart plotter when the alarm goes off and calculates a return course based on speed and drift. Pretty slick, actually, except it is of no real use for the singlehanded sailor. A couple of years ago I sent a suggestion to Raymarine that future software upgrades might somehow allow the system to send a signal to the Autopilot to disengage and go to “standby,” forcing the boat to come into the wind. There was no response, but Grant came to the rescue again.

The new interface box that Grant built is perfect. When armed, it forces the Autopilot to immediately switch to standby should the alarm be triggered. While it certainly would be a struggle to get back aboard a boat bobbing in the waves at sea, at least with a line over the side the single handler might have a fighting chance—as opposed to watching the vessel sail away on her pre-set course.

Thanks to Grant, this is one hearing impaired sailor who, having completed his first single handed sail, is looking forward to many more trips. Perhaps my next “overboard” dream will have a much better ending.