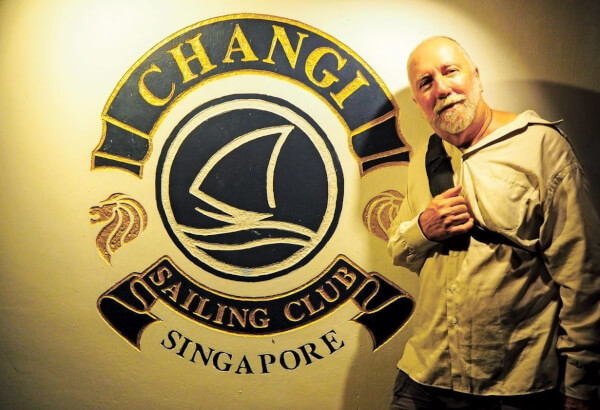 I was dozing off on the Singapore bus, returning to Ganesh after a day attempting to figure out how to promote my latest book while lying around my cockpit in Southeast Asia. It was a complicated marketing problem—and I pride myself on being an uncomplicated, instinctual guy.

At least I wasn’t being a hypocrite. I was practicing what I preach as a frugal sea gypsy. Nearly all my books focus on some aspect of cruising cheaply—and getting on the right side of karma. But this particular day I was just spacing out on the very inexpensive, very clean, very graffiti-free bus when I noticed a silver-haired man stand up and look undecided. He was a handsome guy, and dressed with a certain conservative flair. Perhaps he noticed me noticing him because he nodded politely and asked in a posh British accent, “Do you know which stop I get off for the Changi Sailing Club (CSC)?”

We immediately hit it off. He’d Euro-chartered a few times and was interesting in sailing. I told him I’d show him around the club. We chit-chatted as we strolled down the winding, tree-lined drive. It was late afternoon on a spring day. He was amazingly articulate. I liked him immediately. But things got confusing the moment we stepped into the club—with the Sisters from Reception rushing over to me excitedly.

“There’s a Fat Head to see you, Fatty,” said the older sister. “Another one!”

When it rains it pours. Last month I’d mentioned in one of my columns where Carolyn and I were holed up—and since then a number of demented-but-mobile folks had dropped by.

“He says he’s read all your books,” said the younger sister, “and that he can’t wait to meet you. He’s here somewhere in the bar. He has been waiting for you all day, antsy as a cat!”

“He’s probably an escaped lunatic,” I said. “Or tripping on LSD. Was he an American—did you check him for gum? Or guns? Whatever! The only thing we know for sure—he lacks judgment.”

“Does this happen to you often,” he asked.

Okay—full disclosure: I’ve never figured out how to handle fans. They kinda freak me out. I write, “I’ve twice had to swim away from sinking vessels—once with my seven-year-old daughter in my arms,” and they somehow hear in their addled brains that I’m a great seaman, wonderful father, and own an artful pen.

Anyway, there was now a commotion at the Changi bar, and suddenly Gary the Fan Boy emerged waving dog-eared copies of a magazine—and bellowing, “Fifty dollars for an autograph!”

Three things immediately crossed my mind—one, I needed $50; two, how quiet and low-key the Singaporeans are; and three, and how long the poor guy had waited. I always try to be nice to my readers—after all, it is they who ultimately sign my paycheck. And this Floridian had flown a long way. So, to get myself out of the spotlight and to accommodate my excited-but-jet-lagged fan, I said, “Please come out to my boat, Gary,” but only then did I remember the British dude. Not wanting to appear rude, I said to Russell Trott, “you, too!”

Now it turns out that Flyboy Gary had an almost encyclopedic knowledge of my work—which is funny because I can’t remember what I wrote yesterday. If you ask me, all my stories are entitled Fatty Needs Money! And, basically, Gary wanted me to tell him all the funny bits I’d written over the course of the last 40 years. Okay! So I did—and I soon had Gary and Russell rolling on the cockpit floor of Ganesh, holding their stomachs, weeping, and begging me to stop. However, once I’ve pinned my audience on the ropes, I like to keep them there—so I hit them with sea gypsy joke after sea joke … “It was blowing so hard the wind peeled my Awlgrip off! That’s right, I had to tuck a reef in my ensign! I’m not kidding—those wave crests were so high my ears popped, and in the troughs, I was snatching lobsters off the ocean bottom!” And a couple more … “My boat’s so slow I have to factor in continental drift!” and my go-to joke for the mermaids: “My wife Carolyn only made two mistakes in her life: saying ‘I’ and saying ‘do’ were both of them!”

Looking back on this brutal, merciless joke fest—it was perfect. I didn’t have to blow my own horn; Flyboy Gary was actively prying it out of me. I had no choice but to be mega-entertaining. It was a command performance. And, thus, a couple of times I glanced over and saw Russell watching me professionally—like I was a performing bug.

“But Fatty, you know everybody—all the coolest sailors in the world—because of your being perpetually penniless,” giggled Gary. “I mean, I love that section where you talk about walking and riding buses versus renting a car in Buy, Outfit & Sail.”

I turned to Russell in a rare moment of seriousness, “I think the title of that section was The Joys of Poverty—about how poor sailors can have just as much fun, or even more so, than their Topsider-clad counterparts. And how working as you go can actually be advantageous over, say, watching your precious cruising kitty disappear.”

We had a good gam. Gary Anderson turned out to be a very likeable lifetime boater—and handy enough with tools to replace the gen-set aboard his 44-foot Privilege cruising cat. I ultimately gave him an autographed copy of Creative Anchoring for his kind words and long flight. Russell was nice enough to take a snapshot of Gary and me. I even grabbed a fuzzy one of him.

But it wasn’t until Gary was strolling out of the club and I was shaking Russell’s hand good-bye—that I realized there might be larger forces than just happenstance in play.

“Fatty,” said Russell. “I’m with BBC World. Would you mind if I came back with a camera crew?” 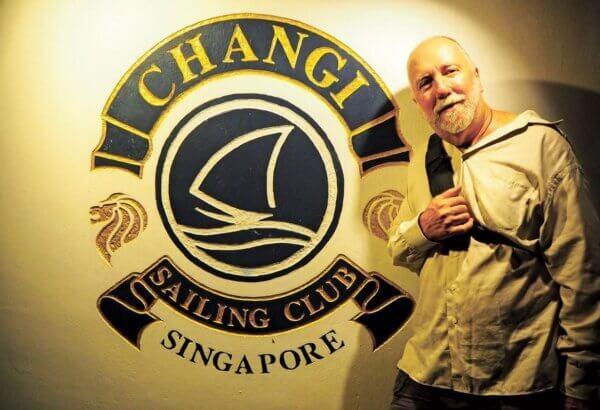 Russell did, indeed, come back—as did Gary. Both men bought us a lavish dinner at CSC—fulfilling my annual promise to Carolyn to take her ashore to eat at least once per year. (I know, I know… I’m too nice, right?)

Three months later—the whole incident above completely forgotten—I announced on Facebook the release of my new book Storm Proofing your Boat, Gear, and Crew. A few hours later, I went to check if there were any comments on the book release post—and discovered that tens of thousands of folks worldwide had seen the BBC piece—which had, coincidentally, been released within hours of the book.

“Boy, are you lucky,” mused my Carolyn. “Bumping into Russell with Gary blowing-your-story-telling horn, and then to have the totally random release days coincide—wow!”

I’m often told I’m lucky. I take it as a compliment. And, of course, it is. But what luck really is—perhaps—is an affirmation of lifestyle. I tell my readers not to worry—to trust in Jah; that when the student is ready, the teacher will arrive. I also inform my readers that Madison Avenue wanted nothing to do with me while I frantically pounded on their door—and have been begging me to return ever since I left. Each year that I cruise—the more hedonistically, the better—the more money I earn. For a modern inkslinging entrepreneur, having a fixed address is sooooooo yesterday. And any idiot knows you meet more people on a city bus than in the back of a limo.

That evening, Carolyn went deep into cyberspace and the guts of Amazon to compare launch figures with Buy, Outfit, and Sail and Creative Anchoring.

“Just lucky,” I said with a smile.

Cap’n Fatty and Carolyn are currently playing the odds in the Southern Indian Ocean.  They are currently on their third circumnavigation: fattygoodlander.com