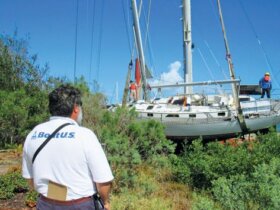 “The only thing Fatty maintains on our vessel is his sense of humor,” my wife Carolyn often jokes.

Not true. I polish our varnished toilet seat twice a day whether it needs it or not. Seriously, we are a year into our second circumnavigation and have recently completed a number of voyage-related tasks and made a number of major purchases.

Our biggest job was installing a new Maxwell VWC1500 windlass with dual (foredeck AND cockpit) controls, including a chain counter.

This costs around $3,000US, which is more than we spend on Wild Card during our entire previous circumnavigation. Why did I spend so much money now? Because, simply put, we had to. Carolyn and I can no longer pull up 200 feet of chain and a mud-loaded 44 pound Bruce… in a wicked seaway… at mid-night… without ‘feeling it’ the next day. Yes, there was a time when we could… actually, when Carolyn could do so all alone… but those ‘young & dumb’ days are gone forever.

We love ‘Max,’ our new crew member. He has actually changed our cruising lives in the sense we now anchor more often and in more challenging places than ever before.

We also mounted a new bow rail. Our old one… rusted off. This new one (well, old & used, actually) gleams, and only cost us $100 total. Excellent buy!

Just before we left St. Thomas we purchased a J/E 3.5 horsepower outboard to ensure we would not have any dinghy transportation problems—-despite the fact that our 15 year old 2hp Yamaha outboard was running fine. This was a huge mistake. The new J/E engine seemed cursed by a voodoo queen. It, and many of its sisters, has a lower unit design flaw. They ‘slip’ in forward. At first I thought it was just my engine in particular… but soon realized there were many 3.5 units slipping… revving randomly… and going nowhere fast.

We had to buy a new 2 hp Yamaha——made in Japan, not China—— which runs flawlessly.

When Wild Card was originally built, she came with design-flawed Dorade boxes which leaked. In fact, the Dorade boxes were so badly designed (deck/liner sloppily smooshed together with shumunder) that they were impossible to fix. I solved this problem by glassing them over… eliminating the ventilation along with the cabin leaks.

Now, however, I’ve opened them up again——and made them ‘cap-able’ in a blow to prevent them from leaking in severe weather. This is, obviously, a compromise… I have to go on deck to put the caps on in adverse conditions… but one I’m willing to make for more air belowdecks offshore in normal weather.

Of course, there was no way I was going to buy yacht ventilators for hundreds of dollars. I used, instead, PVC plumbing elbows… quite stylish, actually, and well within our budget at $10 per. (I suppose they’d look out of place on a Hinckley—— but then, so would I!)

Since we’re poor, more and more of our onboard navigational stuff is computer-dependent. I know that sounds strange but it is true. Rich people can afford fancy waterproof GPS cockpit displays, reams of paper charts and tons of book-bound governmental nav data——but we cannot. We can, however, afford a cheap laptop computer with lots of wires running in-and-out of it.

Since I use my Vaio computer daily for writing, I felt we needed a separate nav/wifey computer. Thus we purchased an inexpensive Toshiba with a wide-screen TruBright display… on which our electronic charts look lovely.

In order to increase our photography income, we purchased a second 8 meg digital camera. I agonized, but ended up with a Canon Rebel XT SLR——and made back most of my investment in the first week of owning it. (Whew!)

Our propane tanks are close to 30 years old and both valves were giving us problems. In addition, they’d never been inspected and were beginning to be rejected for refilling because they were so out-of-date.

Thus we had them inspected and their valves replaced. This only cost $100US, a fraction of their replace value.

Folding bikes: we love ‘em! Carolyn and I have had ours all the way around the world… and use them extensively for transportation and exercise in every ‘flat’ port we visit.

Mine is Brompton folder, the English-built ‘Rolls Royce’ of compact bicycles.

Unfortunately, I chained it to the ten-ton tidal ramp at West Haven marina in Auckland.

“Don’t leave it there,” Carolyn told me, “It will get crushed.”

“Stop telling me what to do,” I scolded her. “Do I look like an idiot?”

Well, we now have the answer.

Not only did my Brompton get caught under the ramp and crushed at high tide… but every little harbor wake pulverized it some more… until I could barely recognize its pretzeled-parts in the wreckage.

Carolyn was nice enough not to say I-told-you-so but I hollered at her anyway. “…wipe that grin off your face,” I said.

We’ve restocked the entire boat, carefully going through our spares, filters, etc, in preparation for being another year or two away from the First World. (We haven’t the foggiest notion what our long-term cruising plans are, they change hourly, but that’s how we like it. ‘We don’t have a plan, and we’re sticking to it,’ as Carolyn says).

How do we know when we should stop doing projects and buying stuff for the boat? We don’t. Our bank account does. We’ll leave New Zealand with very little money–—and ‘live off love’ for the first few months until our word-fed cruising kitty replenishes itself.

Is any of this logical, sane or generally-accepted marine practice? Probably not. But the whole reason we’re sea gypsies and not dirt-dwellers is because we love to say, “Who cares!” and we practice what we preach.