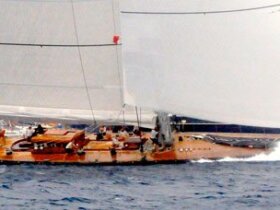 History was made in St Barth on December 31, 2006 when sailor Claude Thélier sped past all the competition with his 60′ racing trimaran, Region Gaudeloupe, and beat the around-the-island time record by one minute. The record set in 2004 by the 147’ Baltic yacht, Visione, was one hour, 32 minutes, seven seconds.  Thélier completed the race in one hour, 31 minutes, six seconds, in his first appearance in this annual end-of-the-year, just-for-fun regatta. Last October, Thélier, who is a professional skipper, completed in the 3510-mile solo race, The Route du Rhum, which sails from St Malo in France to Guadeloupe, where Thélier is based.

The event is organized by the Port of Gustavia, the St Barth Yacht Club, and Mark Del Giudice, the skipper of the zippy 65′ Meriten, Mischievous, which turned in the fastest time around the island among the mono-hulls, at 2’17". Del Giudice, along with fellow crew member, Karl Spijker, and Christoffer Johnson, presented the trophies for the race, which were silver cups generously offered by Kirsten and Trey Fitzgibbons, owners of Mischievous, with a cup for every boat that competed in the race.

With winds of 20-22 knots, the boats were able to unfurl their multi-colored spinnakers as they rounded the northern side of the island, providing quite a spectacle for those on shore watching this annual nautical parade. A total of 31 boats competed, including the majestic J-Class America’s Cup classic, Endeavour, and the handsome J-Class replica, Ranger, which took first place in Class 1 (over 100′), while Fearless, a 72′ sloop, won in Class 2 (60′-100′), and Botox Barbie, a 54′ Hunter, took top honors in Class 3 (under 60′).

The fleet ranged in size from the 178′ Dubois yacht, Tiara, to small local boats that joined in the fun. Skipper Randy West and owner Liza Baldwin sailed the recently renovated Van Ki Pass, taking along some kids from the local sailing school. Interestingly, Mischievous, Van Ki Pass, and Synergy, a Frers 49 that came over from St Martin, had each won their respective class in last summer’s Newport-Bermuda centennial race.

Donald Tofias, who has raced in St Barth’s on his W-76 boats, White Wings and Wild Horses, was back this year with the W-46 Equus, and Philip Walwyn raced aboard his new 12-Meter Class beauty, Kate.

As always, this race is the perfect way to ring out one year and ring in the next, as St Barth has become "the" place in the Caribbean for sailboats and motor yachts of all sizes to spend New Year’s Eve!