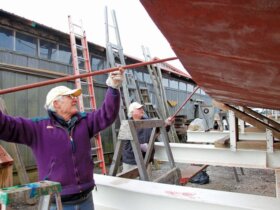 I first heard rumors of new islands in early 2000 but, as always, I waited for confirmation. As with all new discoveries, the naysayers’ and skeptics’ arguments against the new islands’ existence seemed plausible so I waited.

Unlike other islands, these new islands were not formed by volcanic activity. But like other islands, they are subject to the effects of earthquake and tsunami activity. Moreover, these islands contradict the standard answer I give to landlubbers who think islands move. No longer can I answer that we anchor our islands so they do not move about.

The new islands do shift with the currents although they cannot tip over as one U.S. congressman recently stated might happen to Guam. These newly formed islands are not made of earth or rock; they are manmade.

Scientists studying the largest of the new islands know it by several names including the Pacific Trash Vortex, the Great Pacific Garbage Patch, and the Eastern Pacific Patch. This manmade floating island is located about halfway between California and Hawaii.

In addition to The Great Pacific Garbage Patch, the largest of this type of island discovered to date, there are more. The Western Pacific Patch off the coast of Japan and the North Pacific Subtropical Convergence Zone Patch covering a long, narrow area located north of the Hawaiian Islands. And, these may not be the only floating island discoveries. Expectations are high that an expedition launched in the Atlantic will, sadly, locate additional manmade islands.

NOAA predicted the development of the Great Pacific Garbage Patch between California and Hawaii in 1988 based upon a study by several Alaska scientists conducted between 1985 and 1988. The scientists collected and measured the amounts of marine debris floating in Northern Pacific. Consisting mainly of neustonic plastic, plastic floating on or just below the surface, the amounts of debris were astonishing.

Knowing the effects of the currents on movement of debris, NOAA predicted that the plastic debris would eventually come together in large masses in areas of the sea known as gyres, swirling circular areas of relatively calm water. In 1997, this prediction proved true when racing boat captain and oceanographer, Capt. Charles Moore, sailed back to California after completing the Los Angeles to Hawaii Transpac sailing race.

Captain Moore sailed through a remote area of the Pacific known as the North Pacific Gyre and subsequently reported in an essay for Natural History magazine that, “As I gazed from the deck at the surface of what ought to have been a pristine ocean, I was confronted, as far as the eye could see, with the sight of plastic. It seemed unbelievable, but I never found a clear spot. In the week it took to cross the subtropical high, no matter what time of day I looked, plastic debris was floating everywhere: bottles, bottle caps, wrappers, fragments.”

Although there is some debate as to the size of the Eastern Pacific Patch on which this chapter concentrates, conservative estimates say it is twice the size of Texas while others say it may well be the size of the continental United States.

The Eastern Pacific Patch, that floating on the surface or just below, represents only about 30% of the total. The remaining 70% has sunk to the bottom. The trash is comprised of approximately 80% plastic with the 20% balance made up of ghost nets, abandoned or lost fishing gear, buoys and bumpers, cloth, Styrofoam, metals of various sorts, lines, and glass. Included in the plastic are drink bottles, disposable diapers, grocery bags, lighters, six-pack holders, bottle caps, plastic filters, toys, balls, flip-flops, shoe soles, and even pieces of luggage.

Where does it come from? Most studying this issue say the trash that makes up the Eastern Pacific Garbage Patch comes from the western coast of the U.S. and from sources on or within a few miles of the coastline. A drink bottle thrown into a storm drain in San Francisco ends up in the ocean. A flip-flop lost in a creek finds its way downstream and into the sea. A family on a day sail in the bay tosses a used diaper into the water. Attendees at a beachside family reunion leave their Styrofoam drink cups and empty suntan lotion containers behind where it washes out to sea during high tide.

When I lived in a national forest in the mountains the amount of trash left behind after a weekend was shocking and puzzling. How can they carry it in full and have plenty of room to store it, but … once it’s empty, takes up less space, and weighs less, they cannot carry it back out?

Becky Bauer became a scuba instructor and award-winning journalist covering the marine environment in the Caribbean after 30 years as a wild and domestic animal rescuer, rehabber, and educator in the states. She is a contributing photographer to NOAA.

Sargassum Weed – Scientists Research Turning it From Trash to Treasure

The masses of sargassum weed, got so bad that in 2018 there was a swath covering over 5,000 miles of ocean from the central Atlantic to the Caribbean and from West Africa to the Gulf of Mexico