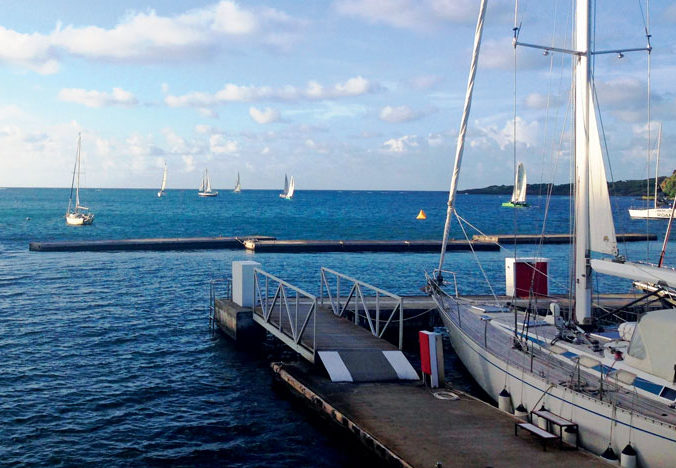 Fleet of 15 Set Sail in PCYC’s Round Grenada Regatta

It’s one of the oldest, certainly largest and most internationally attended of the Caribbean’s dinghy regattas and the 27th edition of Schoelcher International Sailing Week certainly lived up to its reputation. Organized by Martinique’s Cercle Nautique de Schoelcher and sailed February 24 to 28, this event has over the years hosted such high-level sailors as France’s Charline Picon who won an Olympic gold medal in windsurfing in Rio this past summer.

More than 190 sailors from Norway, Sweden, Belgium, France, and Caribbean islands such as Antigua, St. Lucia, St. Barths, Guadeloupe, Martinique and Cuba competed in the Optimist, BIC, Laser 4.7, Laser Radial, Sunfish, Beach Cat and Surprise classes. Winds proved blustery, yet except for slight problems such as one ripped sail and one broken rudder, the competitors reveled in the breeze which blew up to 30 knots.

“It was a fantastic regatta with good wind, good weather and I hope come back next year,” says Markus Berthet, from Norway, who finish fifth overall in the Optimist Minime class, for 13- to 15-year-olds.

“Twelve races over four days was hard, but I am very happy with my result. I am looking forward to coming back next year and race against the best French and Caribbean sailors,” says Liljegren.

France’s Violette Manhes led the Optimist Benjamin class, for those ages 12 and under.

Meanwhile, Martinique’s Mathieu De Sousa couldn’t finish three of the 10 races due to the high winds. “It was too hard, but I was still very happy, he says.”

The BIC class was the second largest with 33 competitors and was won by France’s Mathis Ghio. Last year, Ghio won the French and World BIC championship and finished third in the European championship. Martinique’s Kyllian Lostau’s second place to Ghio certainly bodes well for this youngster’s future sailing career.

In Laser 4.7, Martinique’s Clement Martin topped the fleet, while in Laser Radial it was fellow islander, Bruno Aglae who won. Aglae’s talented showing should put him in good stead for a great finish at the French Laser Nationals this summer.

The Sunfish class was dominated by Martinique’s Olivier Alminin, who bested the dozen boat fleet by 13 points over the second-place finisher.

Guadeloupe sailors Pascal Marchais and Mikhael Mattio sailed to the top of the Beach Cat Class in a tie-breaker with fellow islanders Birgit Krahe and Christian Roux.

This year’s Schoelcher International Sailing Week proved extra special by welcoming a first-time Surprise Class. The Surprise is a 25ft fast coastal cruiser capable of flying a spinnaker and accommodating up to six crew.

“We had a really fun time and were glad to have discovered this regatta,” says Olivier Caucat, skipper and team leader of the Surprise team from France, named Silmaril Orange Caraibes. “The kindness of the Martinican people was wonderful, it’s a beautiful island and the sailing was fantastic.”

This year’s regatta was preceded by a clinic for Optimist sailors.

“I think it is important for all French and foreign sailors to have time to work together before a regatta,” says organizer Michel Zougs. “It’s a special time to sail together but also to speak another language and exchange cultures.”

Zougs’ one disappointment was that few Caribbean sailors attended the event. However, many sailors and coaches are already making plans to come back next year.

“I am familiar with the nautical week of Schoelcher as I was working as a coach on Antigua two years ago,” says Magnus Brun, coach of the Scandinavian team. “I was very glad to come back this year. Next year I will be coming back with several kids from Norway.”