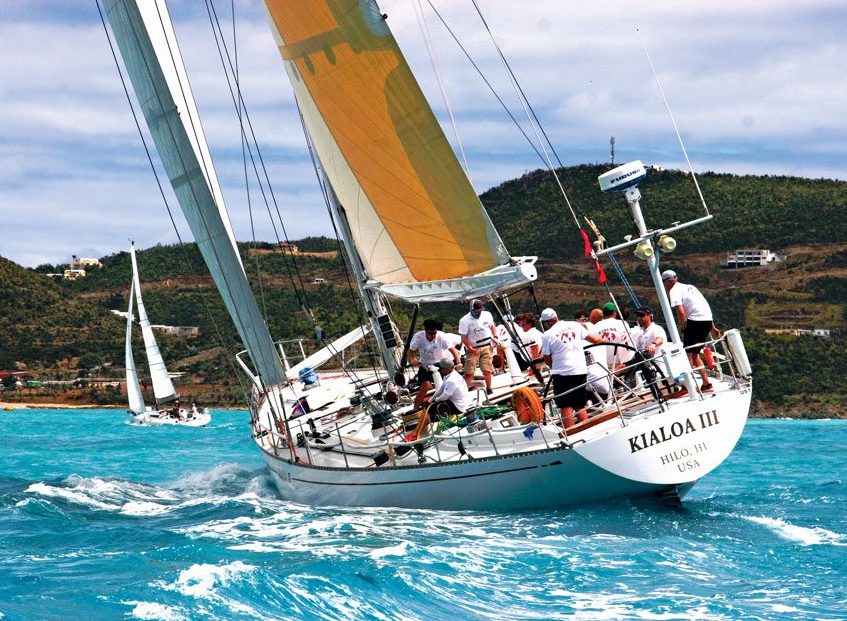 The historical links between welders and ‘the arts’ have hitherto been limited to the 1983 movie Flashdance, in which Jennifer Beals brandishes an oxyacetylene torch as a steel worker who dreams of becoming a professional dancer.

But now that monopoly has been broken in the distinctly undancerly shape of Mark Templeton, a familiar face in the boatyards and marinas of St Martin/St Maarten. Mark has been quietly nurturing a parallel career as a sculptor, producing bold, rugged steel creations for viewing outdoors and other smoother, glamorous polished pieces more suited to indoor display.

And not only that: Mark’s wife Carla is also an artist.

When interviewing an artist, it is not unusual to meet in their studio, a cluttered, ramshackle affair that speaks of a creative mind that doesn’t really do tidy. When that studio is also a workshop, clutter is inevitable.

Having been given their names by St. Martin-based abstract artist Norma Trimborn, it is with sculpture in mind that I kick off the conversation with Mark: so you’re a welder by trade, right?

Mark stops me dead in my tracks. “I’m a chef by trade,” he says. “Then I stopped cooking food and started cooking steel.”

The change of career came as a result of arriving in St Maarten in 1987 speaking neither French nor Dutch and therefore not being able to communicate in the island’s professional kitchens.

Mark had sailed to St. Martin from Cape Town, where he had been living since leaving his hometown, Johannesburg.

In St Martin, Mark met and married Mozambican Carla and he and his new father-in-law Nuno Oliveira started a business which became Mendol’s General Engineering. Mark taught himself the skills of metal fabrication while Nuno took care of engine re-bores, etc.

After ten years Mark struck out on his own and eventually turned to the artistic side mainly for his own amusement.

“I had always been creative in the cooking,” he explains. “And my father and grandparents were all artistic. I still don’t consider myself a fully-fledged artist, even if other people do. I’m too busy trying to make a living. Hopefully, one day I’ll be able to separate the two.”

The family relocated briefly to the US to try to realize a dream they had picked up while taking annual vacations there: an ‘art farm’. They found a property in northern Florida and set up a place where people could come and develop their artistic skills in a bohemian atmosphere. Buses would bring hordes of schoolchildren, church congregations and older people from residential homes. Business was booming.

Then, for a reason they don’t know, the US government refused to renew their visa and they were forced to abandon the dream and return to St Martin. Fortunately, with Mark’s reputation in the boating community still intact, he was able to get going again.

Norma Trimborn asked Mark to create something for the sculpture park on her rambling St. Martin property and the result was the now famous spider.

Does he, I wondered, sketch things before he builds them?

“No, no, no,” he scoffs. “I can’t draw to save my life. It’s all in my head. The head of that spider is just a big old propane tank that I modified. I inverted some of the parts. The tail is another propane tank. I cut slivers out of it and squished it back together.”

Possibly making it sound simpler than it was, he explains how he attached the legs to the body in a particular way so he could manipulate them to get the thing on a truck to take it to the Trimborn residence. Not many artists have to consider such practicalities.

The difference between Mark’s finished products and those of his wife could hardly be starker, although there are extreme temperatures involved in both. Carla works in a Japanese style called Raku, using coarse clay which she fashions with her hands, then fires at 1750°F. Much of the magic comes from the way the glaze is treated. While still very hot each piece is put into a container filled with sawdust, and the resulting combustion gives the finished piece its distinctive look. But it can’t be just any old sawdust.

“I use pine, because that gives me a turquoise blue, which is what I prefer,” she says.

Carla came across the technique on one of the family’s American adventures when she saw a Raku artist giving a demonstration and when they returned to St Martin she researched it, picked the brains of experts and simply had a go herself.

Having become proficient in the process, she developed a range she calls ‘affordable art’, aimed at tourists who want to take home something handmade from the island. Her work can be found in two Simpson Bay locations: Good Cards at Palapa Marina, and The Art Box opposite Simpson Bay Yacht Club.

While some of Carla’s creations fall into the ‘cute’ category, there is also more serious work including highly distinctive decorative ornaments.

In addition to her art and the family business, Carla teaches, both privately and in schools, with the emphasis on adaptability and sustainability.

Between them, the Templetons are living proof that this philosophy can work, and that art is not some precious, elitist thing carried out by sensitive souls in attics. It requires imagination, certainly, but there is also a strong practical side which makes it possible for anyone to have a crack at it.

To view some of Carla’s artwork, visit: www.etsy.com/shop/TheSilverDoor

Chris Morvan
View More Posts
Chris Morvan is a British freelance writer. Originally from Guernsey, he has lived in the Caribbean region for nine years and arrived in St Maarten in December 2017.