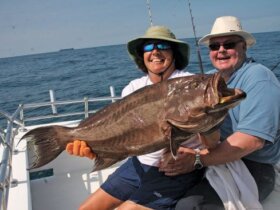 The 2010 Tourism Development Company (TDC) Tarpon Thunder Tournament which was hosted at the Sweet Water Marina in Chaguaramas, Trinidad, was again a huge success.

This year's tournament had 110 anglers competing on 26 boats all along the North Western coast of Trinidad. A total of 154 Tarpons were released unharmed by the anglers.

At the prize giving, held at the Sweet Water Marina, Cornell Buckradee, Manager of Investment Promotions at TDC praised the organizers of the event, the Trinidad and Tobago Game Fishing Association (TTGFA), for another successful year in promoting the sport of fishing in Trinidad and Tobago to foreign anglers. This year's tournament had foreign anglers make up approximately ten percent of the total amount of participants.