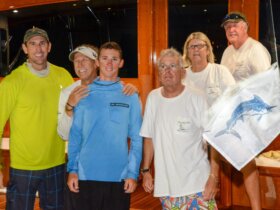 The 2011 Trinidad and Tobago Game Fishing Association (TTGFA) annual Tourism Development Company (TDC) Tarpon Thunder Tournament saw records being smashed as anglers from Barbados, United States of America, Canada and Trinidad & Tobago released a record 236 Tarpons over the three (3) days of fishing. The previous record was 166 Tarpons which were released in the 2009 tournament.

Tournament chairman, Richard De Verteuil said in his speech on prize giving night (August 23rd) at Sweet Water Marina in Chaguaramas, Trinidad that a total of 138 anglers participated on 29 boats. These boats fished all along the North Western Peninsula of Trinidad in search of the “Silver Kings”. The first, second, third and Grande Bocas (Boca Grande) were the popular choice for the anglers although some ventured to parts of the Island’s North Coast and Gasparee (Gaspar Grande) Island.

The winning team, “Ramajay” released a staggering 32 Tarpons over the five (5) fishing sessions which started on the morning of Friday 19th and continued on Saturday 20th and Sunday 21st of August, 2011. Their impressive haul forced last year’s champions, team “Mapepire” to settle for second place with twenty six (26) releases. Third place went to team “PRI-d-Jep” who also had twenty six (26) fish but were beaten by “Mapepire” on time.

Captain of the winning team, Michael Ross along with team members, Christian Reece, Blayne Fahrina, Chad Chu Cheong and Josh Lewis started the first morning of the tournament impressively by releasing nine (9) fish. Six of the nine fish were caught by the skipper of “Ramajay”. However, Josh Lewis and crew were not alone as team “Magic Lady” also released nine (9) fish in the first session.

Several other teams had also done well on the first morning by catching six (6) fish but it was not good enough to compete against the two (2) clear leaders. Later that day during the second session, “Ramajay” took the lead and never looked back afterwards. Josh Lewis of “Ramajay” and Adam Conyers of team “PRI-d-Jep” both released eleven (11) Tarpons but Josh had to settle for second best angler because of time. Paul Hamelsmith of team “Mamazelle 11” placed third best angler with his ten (10) releases.

The Best Female Angler prize was won by Susan Persad of team “Taz”. Susan released a total of four (4) Tarpons. One fish on the first morning took her two and a half hours to release. She was not alone on her boat as her team member, Bob Schutz won Best Foreign angler by also releasing four (4) fish. Best Junior Angler was awarded to Jordan Aboud with last year’s top angler, Joshua Camacho and Matthew Vilain (both of team “Anger Management”) settling for second and third positions respectively.

TTGFA’s President, Reginald Mac Lean thanked all the foreign anglers for taking part and special mention was made of the sponsors for the 2011 Tarpon Thunder Tournament: TDC, Well Services Group of Companies, Carib, Vemco, Blue Waters, Budget Marine, Real Marketing, Tee- Tee Ltd, Reel Tackle & Seafood, Tank & Fuel and Weather Routing Inc. He went on to remind all participants of the importance of handling the fish properly to ensure that they survive after being released.