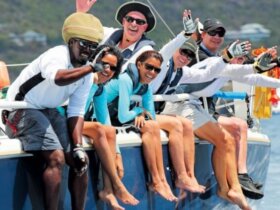 The BVI’s top youth sailors were again frustrated in their attempt to circumnavigate Tortola.  A group of six sailors ranging in age from 9 to 13 years departed Road Town on Sunday, October 26 but could only make it as far around as Nanny Cay.  The rounding was on pace to succeed, but high surf in the cut between Tortola and Beef Island forced the group to add rounding Beef Island to their course.

The Open Challenge event format sees sailors rotating in and out of 9′ Open BIC dinghies as they attempt a counter-clockwise circumnavigation of Tortola.  The bid to sail around the island started well and was on-track for success.  The sailors made excellent time as they sailed up the channel from their departure point at Road Reef.  However, once the sailors passed under the Beef Island bridge they saw that high surf conditions were going to prevent them from negotiating the cut in the reef.  The sailors turned around and sailed back to the South side of the bridge and picked up a tow around Beef Island.

Back on course but now an hour behind schedule the group made their way down the North Shore.   Formidable sea conditions saw big swells rolling towards the beaches.  In fact, the sailors in their 9’ Open BIC dinghies would become partially obscured between the large swells.   Steady wind saw the group make good time between Guana Island and Brewers Bay where the group encountered dolphins.  “That was the high point of the trip,” said Josh Morrell.

Lighter and more variable winds characterized the stretch of the course between Cane Garden Bay and Steel Point on Tortola’s  West end, in fact the group worried they wouldn’t have enough wind to keep going.  "I thought the effort was doomed by then," said Andy Morrell.  "I know how tough the channel can be.”   It was 2 p.m. when the group entered the Narrows for their battle up the channel.  Strong current always makes sailing up the Narrows (the bottom portion of the Sir Francis Drake Channel) difficult.  Fortunately the wind swung to the North which made for easier going.  Still, it took a good two hours to creep from the end of Frenchman’s Cay to Fort Recovery.  “It was real tough,” explained Jason Putley.  “The wind was OK but there was lots of current in the channel.”

In the end, the six sailors only managed to squeak into Nanny Cay at dusk, just short of their goal of making it back to Road Town.

The sailors were Josh & Sam Morrell, Jason Putley, David Carter, Barney Nockolds and Mollee Donovan.  The sailors raised almost $3,000, a portion of which will be offered to the pediatric ward of Peebles Hospital.