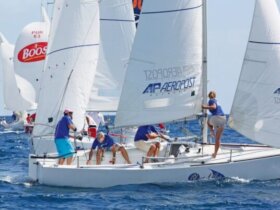 The young crew of Cork 1720 Digicel Challenger celebrated their victory at the beach party prize giving after their overall win in the Racing Division in the Jolly Harbour Valentine’s Regatta sailed February 7th – 10th in Antigua. “This is a great victory for us,” said helmsman Bob Green. “The guys have worked so hard, training after school to prepare for this event.”

In the cruising division Rick Gormley and his crew on the First 38 Elethea also celebrated their win. “I’ve done this event for 13 years and in fact the Jolly Harbour Valentine’s Regatta is the reason I came to live in Antigua,” Gormley said.

The Multihull Class was the first race to start on the final day. John Westgarth-Pratt’s Ascension, a Fontain-Pajot 36 Mahé, and Bill Clifton’s Catana 43, Four Winds, came off the line only inches apart and enjoyed close racing before Four Winds finally claimed victory. Their 17 mile course, set to suit their size and handling, included 13 marks and took them up to the harbour entrance of Antigua’s capital, St John’s for some challenging maneuvers. “The long legs of the course suited us really well,” said Westgarth-Pratt. “It was a great sail for us up to St John’s and then we flew back with the spinnaker.”

For the other two classes, Cruising and Spinnaker, the last day consisted of two races with starts outside the entrance to Jolly Harbour and a first windward leg into the shore and back to Five Islands. From there a series of windward/leeward legs took the fleet northwards.

Racing was exceptionally close. Stephen Carson and his crew on Hightide were sniffing victory as they came bounding back from a sluggish start to the event and finished the regatta only one point adrift of Digicel Challenger’s winning score. Geoffrey Pidduck’s Six-Metre Biwi Magic experienced a minor drama when she dragged Jolly, the first windward mark, downwind as she attempted to round. One competitor observed: “A couple of boats are saying a very big thank you to Mr. Pidduck for moving the mark to their advantage!”

The regatta wasn’t just for the keelboats. The celebration was joined by a dozen Laser Pico dinghies provided by Antigua National Sailing Academy, which completed six races off Jolly Harbour beach. Winning all but one race was 11-year old Antiguan youth sailor Rocco Falcone who is already an emerging star at championship level. But it was the consistency of Bea Shrewsbury that took the championship.

The three-day Jolly Harbour Valentine’s Regatta ended as it began, in perfect conditions of 12-14 knots and flat turquoise seas.

Chairman of the Regatta Organizing Committee Kathy Lammers summed up the event. “We’ve seen a wonderful celebration of the regatta’s 20th anniversary. We’ve had excellent conditions and such great participation from a wide variety of yachts, both those based in Antigua, and others who are passing through.”

Prizes were presented by Antigua and Barbuda Minister of Tourism, the Hon. John Maginley at the closing Rum on the Beach party at Castaways Beach Bar.

Alison Sly-Adams, Marketing and Sponsorship Director for the Jolly Harbour Valentine’s Regatta and Rum Festival, described the ethos of the event. “We are delighted with the reaction to the entire event from sailors, partygoers and sponsors. This was the first year of the Rum Festival and we have been able to really assess the potential of the event. Our rum sponsors have given us fantastic support with their displays and bars.” 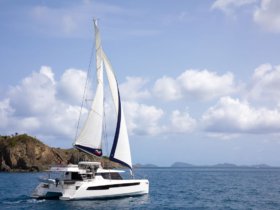 The Moorings will continue its decade-long sponsorship of the St. Thomas International Regatta (STIR), set for March 25-27, 2022