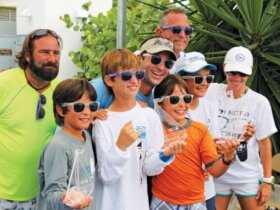 Windsurfing was in the spotlight during the second annual edition of the Saint Barth Fun Cup, held on the weekend of February 1st-3rd. The participation of Dutchman Bjorn Dunkerbeck, who has 41 world championship titles to his credit, added to the excitement! Would the Dutch champion beat everyone else by a mile?

With light winds of 12-18 knots, five races were held over Friday and Saturday, however, Sunday’s schedule was cancelled when even lighter winds made racing impossible.

Race organizer Antoine Questel, Saint Barth’s native son who won his first French national title in November, proved his mettle, winning the first four of the five races. In the final race, Dunkerbeck fought back and went on to win, squashing Questel’s chances of a clean sweep.

“My excellent preparation leading up to this event helped me win even against some pretty strong competition,” says Questel, who took first place overall, with Dunkerbeck coming in second, and Taty Frans placing third.

Ellen Lampert-Gréaux lives in Saint Barthélemy where she is editor-in-chief of Harbour Magazine. She writes regularly about entertainment design and technology for Live Design magazine, and about Caribbean architecture for MACO, a Trinidad-based lifestyle magazine.