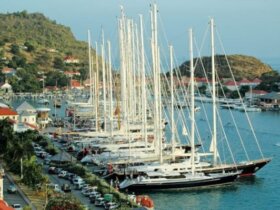 The annual Nelson Pursuit Race off the south coast of Antigua was held on New Years Eve and something like 41 vessels ranging from 17 to 100 feet took part to commemorate Admiral Nelson’s chase of the French fleet back across the Atlantic to Europe. This of course ended with the Battle of Trafalgar where the British Admiral’s famous flag signal was hoisted, “This day England expects every man to do his duty” and, by gad, every man did!

The combined French and Spanish were over hauled close to the French coast by the lighter and clean-hulled British Fleet, having been careened in English Harbour, Antigua, and despite being out gunned by the French and Spanish battle fleet, the Brits pulled off a convincing victory. Sadly, a French sniper on one of the huge French war-ships took careful aim at the still young English Admiral and gunned him down! It is said that with his last breath Admiral Nelson gasped out, “Kiss me Hardy” to his faithful second in command, whereupon Admiral Nelson passed away. When H.M.S. Victory eventually reached home, the body of Nelson was given a royal funeral in Westminster Abbey and the great British Admiral is honoured to this day!

Anyway, as Admiral Nelson was the senior naval officer in the Royal Naval Dockyard in Antigua, the yachtsmen of the charter fleet during the time of Tommy Paterson’s management of the Antigua Yacht Club thought it appropriate to inaugurate the race in Nelsons name. Imagine my delight, then, when on this occasion my Piper 24 won the race overall…originally designed by Scotsman David Boyd in 1965 and rebuilt here in Antigua by a young Brit, Oliver Greensmith of Antigua Boat Builders, and now belonging to my wife Judy, Peter Mullins and myself.

However, in the Nelson Pursuit Race she was sailed by Marc Fitzgerald, skipper of Sojanna, Peter Harrison’s 115’ Farr-designed fast cruiser; Andrew Dove, general manager of North Sails Caribbean; and Robbie Ferron, owner of Budget Marine, my son-in-law. She is now called Springtide after a long line of racing boats which started out with the S & S Morningtide, the Contention 33 Encore, the Olson 30 Riptide, the Dehler 34 Hightide … and ended up with Springtide.

That Springtide is far and away the prettiest and won this recent Nelson Pursuit Race brought a huge smile to my face and made up for the fact that, owing to a mystery illness, I simply couldn’t take the helm. Anyway, being a pursuit race she stayed at the head of the fleet, and on the final beat home, unbelievably, actually increased her lead at the very end.

Race Officer Englishman John Burnie and the rest of the Committee were a little surprised to find out that she was originally built at Sandbanks in Scotland in 1968. But perhaps the best thing about little Springtide is that she is really pretty in the way that a 6 Metre is generally the belle of the ball. It should be said here that Marc Fitzgerald hit the line with the starting gun and, not only winning overall, claimed prize for best start!