The Joke of Clearing, Indo-Style! 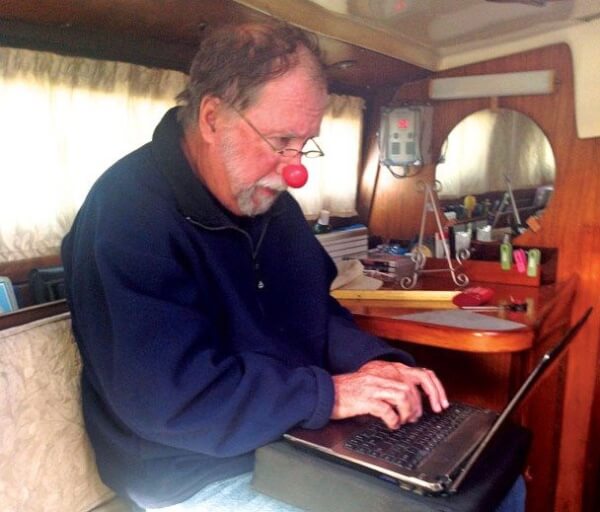 Once upon a time, a gentlemen sailor requested ‘pratique’ from some land-bound gents—during which they toasted each other’s health. In those days, French was the language of diplomacy, and ‘pratique’ (meaning ‘practice’) was an excellent time for both parties to practice their good manners. Since then, things have changed, evolved, but alas, not always for the better.

I just attempted (and, after seven hours and numerous hour-long taxi rides, failed) to clear into one of the smaller ‘official ports of entry’ in eastern Indonesia. This was a huge mistake. Clearing into Indonesia in Bali is straightforward but my ancient guidebook (written by Jimmy Cook of the Endeavor) suggested otherwise. Yeah, sometimes I’m too cheap. Cruising guides written in the 1700s tend to be on the remainder table. Silly me.

I should have known I was in trouble when everyone in a uniform ashore started jumping for joy as my anchor chain rattled out. Even worse, governmental limos (well, almost) started roaring into the port. Flags waved officiously from fenders. There was shouting and yelling. Excitement was in the air. Leaders embraced. Heads of State bowed. Big wigs pirouetted. Bemedaled chests embraced.

And into the middle of all this pomp-and-circumstance, I pulled up in my dinghy—with a sick smile on my brave-but-cringing face. I’d just experienced the nicest 58 days of my life. I was totally tranquil. But, yeah, I could sense a sea-change coming. My internal mood barometer was dropping rapidly. This wasn’t going to be easy. I did the best I could to mentally prepare: “Whatever you do, Fatty—don’t lose face,” I told myself.

Six lofty government officials came out to the boat—only one of them clutching a crumpled sheet of paper. Their elaborate uniforms were immaculate—in a nation where many (most) don’t own shoes.

They sat down around the cockpit table as if settling in for a week’s charter, not to conduct business. I waited. They said nothing, only smiled like cats-about-to-eat-the-canary.

“Can I get you something to drink?” I asked.

Everyone smiled and rubbed their hands. We were off to a good start. “Yes,” said their leader, and the others nodded happily. I busied myself with glasses and ice, while Carolyn made small talk. It was immediately obvious that they rarely saw another yacht. They understood that we’d just sailed in from New Caledonia (French), but didn’t realize that we’d slept aboard or cooked while doing so. They thought that our sail from America took a couple of days, not years.

“If you insist,” said another.

They peppered us with questions, none of which had anything to do with clearing in. “Only one daughter?” asked the port captain. “Why?”

“How much you pay?” asked another, waving at Ganesh, our 43-foot Amphitrite ketch.

“Are you Hindu?” asked the Muslim fellow.

The clock ticked. The sun rose. I sweated more and more, and finally said, loudly and pointedly, “Well!”

I could see a few frowns flicker. Why was I rushing things? Weren’t we all having fun?

One fellow with thick reading glasses began squatting in front of every item aboard with printing. He carefully read each one, moving his lips with intense concentration. I didn’t know it at the time but he was looking for dates. His job was to spot anything dated—and home-in.

Finally, an officer from Health stood up and said, “Excuse me, Fatty. Excuse me, Carolyn. I beg your forgiveness. But I am sure you understand. I am just doing my job,” and went below.

Each repeated the statement and did the same. Now I had six people below, which I’d not expected at all. Thus, all our jewelry and stuff—money, iPods, watches, and stray knives—were just lying about haphazardly. Within moments, the officials dispersed into different cabins.

The thick-glassed dude started piling everything on the boat with a date on the galley table—fire extinguishers, EPIRB, my Lipitor pills …

The fellow from Health wasn’t the leader but, in some ways, he led the pack. He was their moral compass. He found a pile of hats and slowly went through them again and again. He poked. He prodded. He fondled. And finally held up my favorite sailing cap and said, with a wide grin, “Gimme hat!”

“Gimme dollar,” said Mister Harbor, “and you have to pay in the currency of your flag—rupiah no good!”

“No dollars,” said Carolyn, while stuffing wads of them into her purse, “so sorry!”

But my favorite guy was Mister Grinny, who appeared to be having more fun than the rest. Picture a kid in a candy store, and you get the idea. Happy-happy.

“You have two of these,” he said, holding up two identical items in our sea-going home, “Give me one!”

Perhaps my frozen smile was a tad crooked because one official said to me, in a fatherly way, “You really should take this more seriously. They’ve already found two violations!”

At that moment I felt that I, too, had passed my use-by date. I simply was too old to put up with such silliness. I laughed aloud—unable to contain myself.

“Drugs,” another said, with a sad shrug that seemed to indicate the world was a very wicked, very evil place.

Let’s back up for a moment, dear reader, because this is a very complex and highly nuanced scene. And I carry a lot of psychic baggage that affects my attitude: (1) The costs of clearing in a yacht have skyrocketed worldwide. Places that used to charge $2 a few years ago now charge $200 each; (2) The mandatory use of agents has skyrocketed as well, as they and the officials collude; (3) This has greatly benefitted the for-profit rallies. Now, many sailors feel that circumnavigating without paying a front man is kinda dangerous and very stupid; and (4) I loathe corruption.

Most of the 120 yachts cruising Indonesia annually are with a rally—and cruise as a rat-pack. The rest hire agents. Only the ‘old school’ attempt to go it alone.

This is getting increasingly difficult.

But these particular six gentlemen weren’t particularly evil. They just had the wrong mind-set and believed that I kind-of wanted to give them stuff. They figured I was a generous guy for whom ‘money was nothing’ and I’d come to distribute it—sort of Bill Gates and Santa Claus combined.

I kid you not. These guys didn’t think they were doing anything wrong. By this point, they knew I was a columnist for All At Sea magazine, and that I made my living writing books about my travels. In fact, within moments of saying, “You have two; give me one,” the same fellow said, “Oh, Fatty, I hope you write about Indonesia!”

“I will,” I said through clenched teeth. “I assure you, I will.”

I really don’t want to see international cruising turn into something that only the wealthy can buy their way through and the poor can’t.

These are big issues. These are important issues. They go to the very core of who and what I am—and how I live my watery life.

But, back to present in Indonesia, yes, the one guy aboard Ganesh wanted a hat and the other guy wanted a dollar. He didn’t want four hundred dollars—just a dollar or ten. A coin collector, maybe? On the other hand, a dollar is a lot of money here where the largest bill at the ATM is a fiver.

The most disheartening part was that all six of our onboard guests were heads of their department, and were NOT going to clear us in. We’d still have to come to their offices and go though all the paperwork, pay all the fees, etc. They were just sort of … royally welcoming us.

“And,” said Mister Grinny, “there are other men in other Government offices who would like to come aboard. Are you and Carolyn going to be onboard all day tomorrow for further inspections?”

Seven hours after hoisting our Q-flag, however, one guy leaving his air-conditioned office early on Thursday, and who wouldn’t be back until Monday or later, said briskly, “No time! Besides, you really can’t clear in here. Try Bali. They like yachts there.”

So, in the end, they wouldn’t clear us in. And, thus, they couldn’t clear us out. We needed a ‘transit’ clearance for Bali, but they couldn’t give it to us. We were trapped in a Catch-22. Nobody knew what to do. It was a great mystery. The best minds mediated. There was much discussion. Finally, one well-spoken man in a perfectly pressed uniform said, “Stay awhile, Fatty. We are friendly!”

And they were friendly—in their own weird, demented way.

Bali was a completely different story. We’re totally enchanted. This is one of the best cruising destinations in the world—but bring your Zen, for sure.

Editor’s Note: Cap’n Fatty and Carolyn are heading, once again, back to the Suan Mook monastery in Thailand—in hopes of repairing the mental damage inflicted.