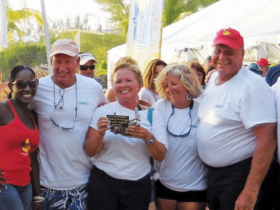 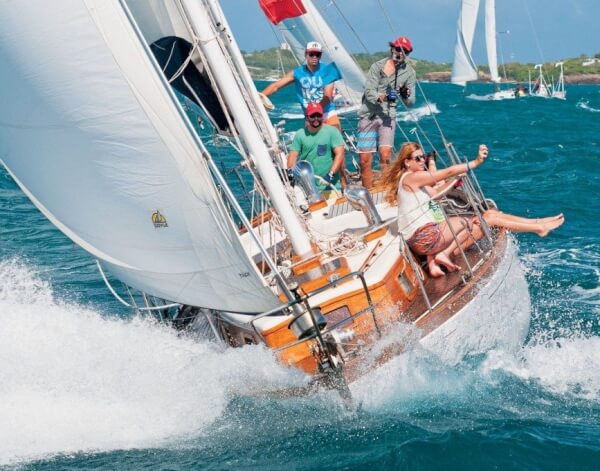 If the smiles and laughter at the official prize giving is the measure of a successful regatta, then the 2014 edition of Grenada Sailing Week, sailed January 30 to February 4, was a massive success.

Sailors from the Caribbean and around the world enjoyed racing in a variety of conditions. Grenada Sailing Week is a blend of glorious Caribbean weather, race courses designed to show off the spectacular vistas of Grenada and great parties after sailing.

This year the regatta committee’s mantra was – Spice it Up! Diverse courses provided some high-octane racing action and every night was party night at some of Grenada’s best loved venues. Grenada Sailing Week was hosted by Port Louis Marina, Le Phare Bleu Marina and Prickly Bay Marina. On the water, 14 race courses, ranging from tight windward-leeward to stunning coastal navigations, tested the teams.

The Fun Class is designed for entries that don’t fly spinnakers, that need fewer crew and have a more relaxed approach to racing. Christian Nelias’ Baltic 42, Tropical, was the victor. With a clean sweep of eight straight wins the French team from St. Tropez had the best score of any boat competing at the regatta, but the boat of the week was awarded to Peter Morris’ Frers 43 Jaguar from Trinidad.

Jaguar was racing in an exceptionally competitive CSA Cruising 1 division and had an epic battle with Bluewater Sailing’s Chao Lay, skippered by Alex Johnstone, and Canadian entry, Scott Watson’s Boxxer. The winner was decided in the very last race, which Jaguar won to take the title. Boxxer and Chao Lay tied on points, but Chao Lay’s second in the last race gave the Grenadian team runner up in class.

“Grenada Sailing Week is a fabulous regatta,” commented Jaguar’s skipper Peter Morris. “It is the first event of the season for us and from here we head north to take part in more. The team are all good sailors, but we don’t have any professionals. We are good friends who love to sail and Grenada Sailing Week provides great racing and a fabulous atmosphere ashore. Winning the best performing yacht overall prize was a very special moment for all of us.”

The Blue Peter was the clear winner in the Classics division. The British cutter-rigged sloop was dismasted in Antigua last year and it was great to see this beautiful classic back on the race course and to see that skipper Mathew Barker has her going so well. With most days blessed with good winds, The Blue Peter went like a witch upwind. Stuart Armstrong’s vintage British ketch, Desiderata, was second with Grenadian Danny Donelan’s Carriacou sloop, Savvy, third.

In true Grenadian style, Danny invited many crew onto Savvy to enjoy the regatta, including Peter and Scott who had travelled from the remote Scottish, Shetland Islands. “We have had a fantastic time in Grenada,” smiled Peter, “many thanks to Danny for his hospitality. Like Grenadians, we also come from an island and although our weather can be rough at times, we have the same spirit in The Shetlands and that has been delightful to experience here in Grenada.”

The prize giving ceremony at Prickly Bay Marina was attended by the Hon. Alexandra Otway-Noel, Minister for tourism, civil aviation & culture who said: “Sailing is a very important part of the culture of Grenada and we welcome visiting sailors with open arms.”

After the ceremony a mass steel band, positioned all around the dance area, filled the dance floor with revelers, but there was even more to come. A breath-taking fire dance troop was followed by the full complement of the Tivoli Drummers. Sailors joined in with the group and limbo dancing and a conga really got the party going.

The skies above Prickly Bay lit up with a spectacular firework display and then Barracuda and his band turned up the volume with rock and roll and despite five days of intensive racing, the party went on until the small hours.