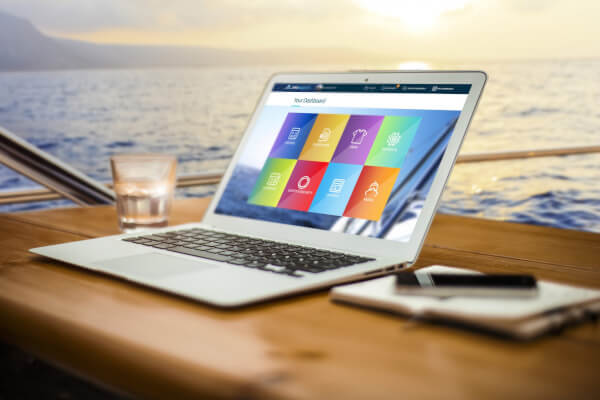 Sealogical is a yacht management platform, widely regarded as having transformed the yacht management industry. Used by Y.CO since 2008, it has recently been launched as a standalone service for the sub 500GT market.
Peel, what is your background… why yachting software?
Growing up, my father was a yacht broker and manager, so I was always either on or around boats. Every summer holiday was spent on a boat he would charter from a client.  Back in 2000, I developed a web software business just after the dotcom bubble had burst. I sold a piece of a football club management software that I had created called ‘Club Captain’ to the FA (The Football Association in England). This was before Facebook, of course! The software helped captains set up fixture lists on their club pages, and also allowed players to indicate their availabilities and so forth.  ‘Club Captain’ funded the first version of Sealogical, which I had initially created for my father’s business.
How did you get involved with Y.CO?
I left London around 2003 and moved to the South of France. This is where I met Charlie Birkett and Gary Wright, the founders of Y.CO, and where I first explained what Sealogical was. They wanted it! During that time, the phone and fax culture of yachts was still very much in place. They immediately saw that Sealogical would be a game changer for them.

What did it change?

Well, for Y.CO, Sealogical allowed them to have the largest fleet under management, with over 80 superyachts, within a matter of 2 years. For the yacht industry itself, it transformed the way yachts were able to communicate with crew, owners, managers and boat yards.  Even the simplest maintenance planning element of the software meant that everyone had a much firmer grip on what work needed doing, in what yard period it could be done in, for what cost, and so forth.
By around 2008, Sealogical had developed into a full-fledged SMS (Safety Management System) with Safe Manning Alerts, which lets the Captain know if the yachts are equipped with a qualified crew on board or not.
With the MLC (Maritime Labour Convention 2006) coming over the horizon, we added the Hours of Rest feature so that the Sealogical system would record each crew members’ hours of work and rest, and alert the individual crew members and captains if minimum hours of rest had not been achieved.
What’s in the pipeline?
We now have Sealogical Sync, which enables yachts to access all their essential information on board, while on an offline PC.  Any changes that are made to the information on the database, whether from on board or on shore, are automatically synced when the yacht regains an internet connection.
To allow more yachts to reap the benefits that Sealogical has to offer, we launched our dedicated sealogical.com website.  The website provides all of Sealogical’s benefits to yacht owners that may not need a fully managed service, but that want to run their yachts on the same professional lines, and make use of a fully featured yacht management platform, such as Sealogical.  The turnout has been incredibly positive and people have really responded to Sealogical’s simple and user friendly interface. We already have 70 to 80 yachts trialing the program to date, and more are signing up every day.
What has made it so popular?
The main reason, I think, is that Sealogical is the only fully featured yacht management system available to any yacht owner. No other system allows you to do everything from enter in hours of rest, to managing an inventory and a refit.
We’ve also made it look beautiful and easy to use.

I should also say, we are offering all this at only $190 per month. I’ve watched people’s mouths drop, literally, when I’ve told them the price after first having described all the features!