How To Select A Kayak For Fishing 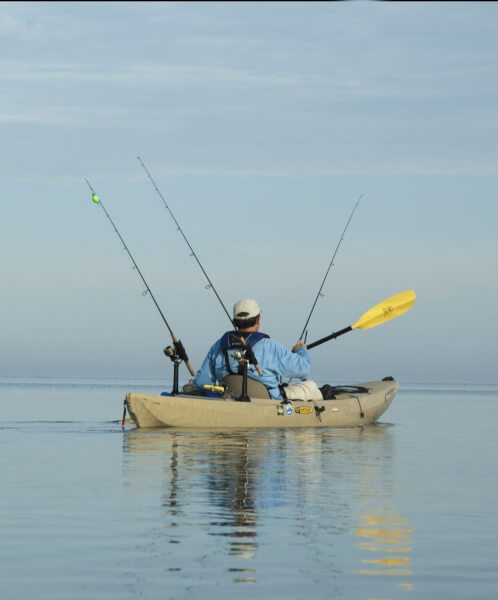 You want to get on the water and catch fish like never before from a kayak, but it seems as if there are as many different kinds of fishing kayaks out there as there are lures to catch fish.

So how do you determine which kayak is the best for you and your kind of fishing?

By taking into account where and how you will fish and understanding the basics of kayak characteristics you can better decide which is the right kayak for you.

Fishing kayaks come in all shapes and sizes but some basic understanding of physical features will help in the selection process.

If you plan on traveling long distances on the water with your kayak then it would be in your best interest to go with a longer kayak (starting in the 12-14 foot range and on up from there).

If you are planning on fishing on open bodies of water or even offshore for pelagic fish you have to go with a kayak that can handle the demanding conditions that can be found in these locations and is comfortable to paddle to and from them. A longer kayak would fit the bill.

Shorter kayaks have the advantage of more maneuverability in tight quarters, so if you will be fishing in narrow creeks or mangrove channels you may want the maneuverability of the smaller kayak. Smaller kayaks also have the advantage of generally being lighter and easier to transport. Many of the 8-foot or similar kayaks can fit in the back of a minivan or SUV relatively easily and can be loaded and unloaded with ease, as they tend to be considerably lighter than longer kayaks.

A downside of the shorter and smaller kayaks is that they tend to fish-tail when paddled. This simply means that as you paddle on the right side the kayak turns to the left and vice-versa. Over short distances this is tolerable but on longer paddles it become tiresome. Longer kayaks tend to track better (part of what makes them go faster) and won’t fish-tail as much.

A keel or a ridge running down the center of the kayak or at the least on the back half will help keep your kayak going in a straight direction. Rudders also help with this but are used more for tracking in strong wind or current conditions.

The shape and width of the hull are also important features to pay attention to. Wider generally means more stable, and stability is an important factor when it comes to kayak fishing. There has to be a compromise, however, as too wide and it becomes uncomfortable to paddle even with an extra long paddle.

The shape of the hull can also create stability. Chines, or ridges that run along the length of the hull, can add to stability and tracking. Many new kayaks have hulls with tunnels or multi-hulls molded within the main structure and these can add a tremendous amount of stability. Other kayaks are built from two hulls and are true catamarans. Still others have wide flat bottoms that allow for stability in calm water.

Kayaks are made from a variety of materials, including roto-molded plastic of various forms to high tech composites and fiberglass and even Kevlar (the same material used in bulletproof vests). Keep in mind the fancier the material the higher the price tag.

Roto-molded kayaks such as those from Hobie are the most common and are also some of the most durable and economical. Fondly called “Tupperware” boats these kayaks can take a lot of abuse and still hold up well.

Composite kayaks and those made of materials such as the high tech plastic known a Trylon made by companies such as Hurricane Kayaks are lighter than roto-molded kayaks but are more expensive. Trylon is exceptionally tough and gives the sleek shiny look of a composite kayak but without the care needed with the more fragile composite boats at a lower price.

The material the kayak is made from has a direct affect on the overall weight, which may have negligible affect in the water to some but can make a difference when moving the kayak around or transporting it.

The other decision to make is whether to pick a sit-in kayak or a sit-on style.

Sit-in kayaks tend to seat the kayaker lower to the ground and aid in stability. You are sitting lower in the kayak and sometimes while fishing this can be an issue (particularly if casting a fly rod). They are usually the first choice if fishing in cold climates as they can be equipped with a skirt (a protective cover on the cockpit) that stops water and the elements from entering the kayak, all while keeping the kayaker warm and relatively dry. Even in warmer areas if you desire a drier ride sit-in kayaks again tend to be much drier than sit-on-tops. Sit-in kayaks are much more difficult to re-enter should you capsize or wet exit the cockpit. If you are able to get back in you have to pump out all the water in the cockpit so if this is a possibility a sit-on-top should be considered. Sit-in kayaks tend to be a good choice if fishing in quiet backwaters.

Most sit-on-top kayaks are self-draining and allow for easier re-entry on the water. They enable the kayaker to sit a bit higher and move around the cockpit more easily (very handy while fishing). Some even allow you to hang one or both legs over the side without capsizing the kayak. They tend to be wetter rides but can be much cooler in hot climates.  Most tournament kayak fishermen use sit-on-tops for all these reasons. Kayakers in colder climates even resort to wearing dry suits to have the flexibility of sit-on-tops.

If you can test the boat out on the water to truly feel how it handles on the water, do so. It is really the only way to be sure the kayak is the right choice for you. Rock the kayak and get a feel for how tippy it is. If you plan to stand when fishing then make sure the kayak is designed for and capable of doing so and give it a try. See how comfortable the seat is. If the kayak doesn’t come with a seat then get the best you can afford (we will talk more of this in our upcoming rigging article). Paddle it and see how it tracks and how the wind affects its performance. Check to make sure that the hatches and mounts are comfortable and accessible and that the foot braces are comfortable. Get a feel for the kayak and see if it matches your needs and expectations.

There are times that all the research in the world would lead you to think a particular kayak is the one for you only to find it totally uncomfortable on a sea trial.

There are plenty of choices out there so test all the kayaks you think might work for you and think about how and where it will be used. You are certain to find a kayak that will take you comfortably to your next fishing adventure.

Glenn Hayeshttp://www.HayesStudios.com
Glenn Hayes is a writer and photographer based out of west central Florida and has marine industry background spanning almost a quarter century. He can be reached through his web site www.HayesStudios.
RELATED ARTICLES
Fish

I want one… Intro to New Hobie Mirage® i11S Kayak