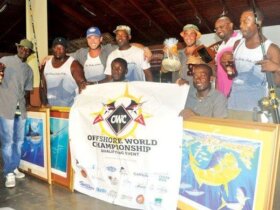 The thrill of hooking, fighting and landing a billfish is something that ranks high on any angler’s bucket list. Doing it from a kayak and winning cash while doing so is something worth bragging about. Anglers can do just that this January at the Sailfish Smack Down put on by Extreme Kayak Tournaments. So get your kayak rigged and your tackle ready and head to Pompano Beach for a unique tournament, the thrill of a lifetime and some serious bragging rights.

The two-day tournament, the only U.S. billfish kayak tournament, will occur January 30 – 31 in the waters off Pompano Beach, Fla. Joe Hector, the tournament’s organizer and the founder of Extreme Kayak Fishing, expects over 120 kayaks to enter this year as word of this unique tournament spreads. Now in its third year, this tournament is one of five extreme tournaments held each year. In April the Battle in the Bahamas, also known as the Saltwater Championship at Port Lucaya, kayak anglers from around the world compete for $10,000. A new tournament in Corpus Christi, Tx. will be added to their summer series following the first two in Florida.

Joe explained that Pompano Beach was a logical location for his unique tournament because billfish are easily accessible a half mile off the famous beaches. The area is is also a great vacation location where competitors can kayak fish for pelagic fish while enjoying a great vacation with friends and family. Indeed many entrants gladly give up cold winter days for sunny Florida. In fact the first year’s winner was a first-time billfish kayak angler from Oklahoma. Joe also noted, if traveling from far afield you don’t have to bring your own kayak. Tournament sponsor, Nautical Ventures, will rent all the kayak equipment needed, with advance arrangements.

Most anglers though, will bring their own kayaks since each is unique in how it is rigged and equipped. Joe says, however, there are three basic items all anglers will be required to have. They are: at least two rods rigged with a 15-foot clear leader, circle hooks and a livewell of some sort. It can be a home-rigged well, a five-gallon bucket with one or two aerators or the increasingly popular Hobie livewell. Livewells are necessary because the best bait for sailfish and other billfish in the area is live goggle eye. Anglers can purchase goggle eye during a brief time period, from bait boats stationed just off the beach right after the adrenaline boosting shoot-off start. The cost is around $40 a half-dozen. Anglers will also have to pass a Coast Guard inspection for safety equipment prior to the start. The inspection looks for a life vest and a safety flag visual.

All anglers are required to monitor the event’s working channel and call in their catches. Once a fish is hooked and called in, a support boat will come to the angler to witness the leader grab, and then will take the fish to help revive and release it. There will be other support boats on the water to help kayakers in need and even a boat with Zona Fresca aboard handing out burritos on the water to hungry anglers.

All the fishing takes place about a half mile offshore in 80-200 feet, right at the color change where the depth drops off rapidly. Anglers should be prepared for choppy seas and have stable and comfortable kayaks as winter produces rougher seas than does typical summer weather. Anglers launch at 7 a.m. near the Pompano Pier and lines are out at 3 p.m. All anglers must check out each day. There is a second check-out station a mile down the beach at 16th Street for anglers that may have drifted north.

The entry fee for the tournament is $150 per angler and includes the two-day tournament, a kick-off party Friday from 6 to 9 p.m. at Bru’s Room in Pompano Beach, a goody bag, food and drinks on the beach tournament days and a big raffle that benefits the Broward Children’s Center.

So get your kayak ready and hit the beach in January for some serious fun, bragging rights and possibly some cash to boot.