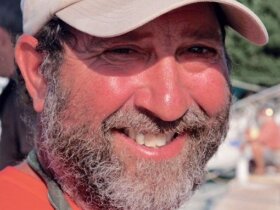 Cedar International School senior Jason Putley sails a lot, so when he was given an opportunity to do a two-week internship with Team Aqua in the RC44 race series, he did not hesitate.

The two-week internship included building the boat, racing in a regatta, riding along in the coaching boat, dismantling the boat and packing it into a container to be shipped to the next destination.

The five-event series returned to Virgin Gorda for the second year by request of the boat owners. The series started in Malta in March and then headed to Porto Cervo, Italy; Marstrand, Sweden; and Cascais, Portugal before finishing at Virgin Gorda.

The RC44s are shipped from destination to destination in containers and are built on site. Organizers said it takes about four days to build the boats, while dismantling takes about half of the time.

“I learned a lot about how the team program works,” Putley said. “It was a front seat opportunity.”

Team Aqua, the defending champions, finished third during this year’s series, but the team played a big role in exposing youth sailors, like Putley, to the RC44 program. Aside from the internship program, which is offered to aspiring junior sailors between the ages of 17-21, the team and the RC44 association reach out to a local yacht club at each venue.

“This is an important part of what we do — to try and reach out to the juniors and get them on board,” said Chris Bake, the owner and driver of Team Aqua. “Next year, I am going to get one or two juniors to sail with us if I can’t make it. For someone who hasn’t had a lot of keelboat experience, to get into this and practice, would be really nice.”

On the final day of the series, ten youth sailors from the Royal BVI Yacht Club got an opportunity to sail on an RC44. The junior sailors sat on the stern of the boat close to the helmsman and tactician for one race. After the award ceremony, many of the yacht club sailors headed back to Nanny Cay aboard Team Aqua.

“We do it as much as we can,” said RC44 Event Coordinator Hubert Detrey of the youth initiative.

Some of the sailors are as young as five-years-old, but most are experienced and have competed in numerous regattas. Although the youth sailors understand the fundamentals of sailing, they are given a briefing before they set sail on the high-performance yachts.

“This is the future of sailing,” said Detrey. “If I was a young kid, I would love to sail against the best in the world. The kids really like it and some realize that they are even sailing next to an Americas Cup star or Olympian.”

Off the water, the professional sailors often take a minute to chat with the youth sailors and sign autographs on anything from hats to posters.

“It is really a special moment for everyone,” said Detrey. “It’s an unforgettable day.”

The guest program is not limited to youth sailors. The ninth-man place is situated behind the skipper near the ‘scoop’ of the boat. This allows the owner or VIPS to get an up close view of the regatta as well. The guests are aboard during the regatta, which counts towards the series.

“They can’t help, they can’t hike or ask questions during the race,” Detrey said.

The guest program has been part of the RC44 series for the past nine years. As far as Detrey knows, the RC44 class started the unique concept.

“Sailing is difficult to see from way outside for partners, friends and sponsors. Broadcasting live on television is too expensive to organize,” Detrey said. “So, we bring the people on board for a real race. Once they experience it, they get really emotional.”