Highlights of the Bahamas Southern Islands

This issue we are going to conclude our exploration of the Bahamas by visiting the remaining southern islands, which are rarely visited compared to other areas of the Bahamas. 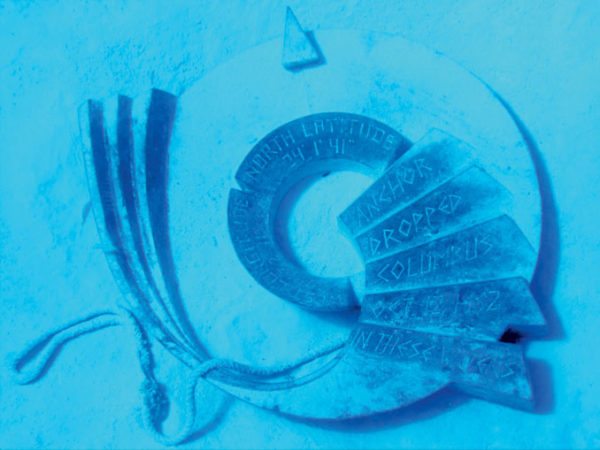 San Salvador — Underwater Memorial — Up CloseSan Salvador is recognized as the first landing site Christopher Columbus made in the new world. There are numerous monuments commemorating this sailing feat. Most are on the leeward side where archeologists think he set foot for the first time near a native settlement, but there is also one on the windward side that seems to be the oldest. There is even a monument in the middle of the bay where he dropped anchor.

At the south end of the island you will find Watling’s Castle. Folklore states this was the retreat erected by pirate John Watling in 1680 with a panoramic view of the southern part of the island. As romantic as this tale is the reality is that it was simply a plantation house built a hundred years later in history with an interesting natural cellar. At the north end of the island Dixon Hill Lighthouse was built in 1856. It is hand operated and stands 163 feet above the water. It is one of only 4 kerosene lighthouses left in The Bahamas and one of ten in the world.

Don’t miss Rum Cay, 20 miles to the southwest. The island got its name due to a ship wrecked while carrying rum. Another ship that wrecked on the reef is the 101 gun man-o-war HMS Conqueror, which went down in 1861 and is still visible in 30 feet of water. Sailing to the northwest corner of the island and you will find the beautiful, but open Flamingo Bay. As long as you watch out for the numerous coral heads you can navigate without a problem. This is a great place to dinghy or kayak several miles across the north of the island to Hartford Cave. Here you will find a treasure trove of Lucayan petroglyphs or rock carvings. The island also has a massive salt pond.

A mere 8 miles to the northwest is Conception Island. This uninhabited gem of an island is riddled with salt creeks and is a great spot to take the dinghy or kayak exploring. The entire island is only 2 by 3 miles and is part of the Bahamas National Trust. While you are exploring the salt creeks watch for turtles because this is a nesting ground for them. Although the creeks are fascinating don’t forget to dive the many reefs around the island also.

The last three islands are the most remote and least visited islands in the Bahamas. First is Samana Cay with its wonderful yet dangerous reefs. There is a nice anchorage, but it should only be attempted in fair weather and with good eyeball navigation. Here you will find the Bahama Huntia, the only indigenous mammal in the Bahamas, which was thought to be extinct until the 1960’s.

Next is Great Inagua Island where Morton Salt has a huge facility. There is also a large bird colony in the mangroves and swamps.

Last is Mayaguana, with Abrahams Bay on the south side providing a nice anchorage. This a great place to snorkel the amazing reef protecting the bay and rest before heading to the Turks and Caicos, which will be the subject of the next two issues.

First-Timer’s Guide to the Bahamas

Guide to San Salvador Island in the Bahamas