It’s Thursday morning—midway through the week of windsurfing that is the Highland Spring HIHO—and there are 19 windsurfers out on the water, with winds around 20 knots. They’re all hoping to make it the 22-mile trip from Trellis Bay to Peter Island, but only 12 make it on their own accord.  It’s a rough day; when it’s windy the Sir Francis Drake Channel serves up some nasty sea conditions.

We are tossed around aboard one of the Moorings’ catamarans that the windsurfers and spectators live on for the week. Those who aren’t racing keep an eye on the course from the yachts, and soon Wilhelm Schurmann appears on the horizon, leading the pack.

Schurman, known now simply as “the Brazilian” (because that’s where he’s from,) has won each of the event’s stage races.  He nails today’s race too, though on the beach afterwards he explains that local racer Sam Talbot pressured him on the Cooper Island to Beef Island leg of the course.  Talbot then had equipment failure and had to resort to sailing the final leg minus a harness line.  He ended up 6th in that race, and very tired.

A worse fate befell local racer Gabriel “Gumshion” Creque who missed rounding the 2nd mark on the course and instead nailed it.  “We rarely use fixed buoys,” explained race director Simon Woods, “but in this case we did, and Gumshion hit it.”  It’s just another day at the Highland Spring HIHO event.  There’s no other event like it, and people come from all over the world to partake.

The racers who finished in the top ten spots represented ten different countries, spanning as far away as Thailand and South Africa. A total of 26 windsurfers participated in the event this year, as well as those who were just along for the adventure; a week of visiting about a dozen islands around the British Virgin Islands, having lunch on quiet beaches, spending afternoons in the water, and nights full of parties. Andy Morrell—the man behind the event, with a support crew that includes new race planner Simon Woods—is dead on the money when he explains the event is “the dream of every windsurfer.”

Ed Sparrow from title Highland Spring attends every year and had nothing but good things to say about the event. “A fantastic week’s racing, for all you guys who took part, I know … I’m sure most of us here who weren’t racing know it takes guts and determination to do what you did this week,” he said. And it’s true: those who took part gave it their all and had a great time doing it.

Ed and I along with the rest of the non-competitors followed the racers through the BVI aboard a fleet of Moorings yachts.  All event participants live aboard a captained Moorings 4300 cat.  Andy described this as the essence of the event.  “Life aboard the cats is probably the best of the event,” he says.  “The Moorings delivers us a fleet of great boats, and we hand pick our captains to ensure they can assist us in running the event.”

This year’s itinerary took in Virgin Gorda and the islands in and around the North Sound, Anegada, Beef Island, Peter & Norman Islands, Little Thatch, Jost Van Dyke, Sandy Spit and Tortola, all in seven days.

Following seven races covering some 100 miles in total, “The Brazilian” was handily atop the leader board.  Challenging his lead were Jean-Marc Peyronnet from St. Martin who finished 2nd overall, and Sam Talbot from the BVIs in 3rd overall. Other contenders from the Caribbean were 16 year old Stuart Jennings from the Cayman Islands (who was the only entry in the junior division, and finished in 6th place overall) and Gabriel “Gumshion” Creque from BVI, who finished in 14th.   All results are at www.go-hiho.com

Next years Highland Spring HIHO 2009 is the event’s 25th anniversary.  Organizers are anticipating a big turnout! 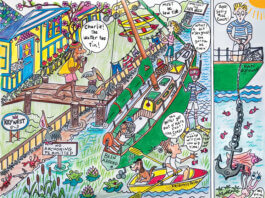