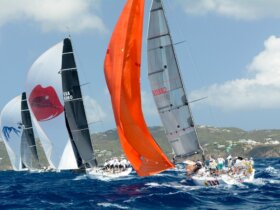 One visually spectacular aspect of the 40th Antigua Sailing Week was the re-introduction of a multihull class, resulting in the entry of four sleek Gunboats competing in their own special category. One of these, Cream, is now in Antigua permanently. The owner is Antiguan Xabier Ross, who also runs the successful company Wadadli Cats, with its popular round-the-island tours.

The original driving force behind Wadadli Cats, founded in 1987, was Xabier’s brother, the exceptionally talented Inigo Ross, champion Olympic windsurfer and brilliant sportsman. Unfortunately, his daredevil attitude to life led to his tragic drowning in 1997 off the St. Lucian coast. As a result, Xabier was obliged to take overall control of the running of the company; however, he turned Wadadli Cats into a highly-successful enterprise and as it continued to grow over the years so did his love of catamarans.

Xabier then started looking for something with more of a challenge, and eventually in 2004-2005, he caught sight of the original Gunboat, the 62 ft carbon fiber Tribe, anchored in Falmouth Harbour when she visited Antigua with her owner, designer, and builder, Peter Johnstone. Her sleek lines and sailing speed so impressed Xabier, he begged Peter to take him out on her for a sail, and the rest is history, as they say…In reality, Xabier read up everything he could about Gunboats, coming across the unusual metallic-green Cream in various magazines. It was at the Annapolis boat show in October 2006 that Xabier struck a deal with Peter Johnstone, eventually acquiring her in December of the same year.

Despite his lack of experience in sailing Cream, he entered her for the 40th Antigua Sailing Week in April 2007. Years ago there was a multihull class in this regatta, but it proved too dangerous at the time and was discontinued until relatively recently when, with more safety facilities available and due to popular demand, there were enough entries to justify its re-introduction.  Peter Johnstone himself was instrumental in ensuring that at least four Gunboats took part (the fifth entry failed to make it) in Antigua Sailing Week, thereby justifying a separate racing category just for the very fast Gunboats, with the catamaran cruising category comprising the second one in the multihull class. After six races, Cream was third overall, with the 62 ft Looking for Elvis first, the 48ft Lickety Split second and the 48 ft Angelica runner up.

Xabier was nonetheless pleased with his result  and thrilled with the experience—Gunboats take a lot of getting used to—and in order to increase his expertise, he promptly took off to the Angostura Regatta in Tobago with Bernie Wong, whose successes with Huey and Huey Too in Antigua and in St. Martin at the Heineken Regatta are legendary. Xabier told me he didn’t actually do any racing there but he represented Antigua in Tobago. “Doing what?” I asked. “Liming!” he replied: obviously doing what Antiguans do best!

The Gunboat bug has definitely bitten Xabier, and next year he intends to enter the Heineken Regatta in March, Grenada’s regatta, and Antigua Sailing Week again in April. He hopes that the success of the multihull class this year will encourage more entrants, particularly of Gunboats, which now constitute a really new and exciting category. Meanwhile Peter Johnstone’s production line in South Africa, home of the Gunboats, looks like it is beginning to take off, and hopefully we will be seeing a lot more of these powerful, high-tech sailing vessels both cruising and in competition.