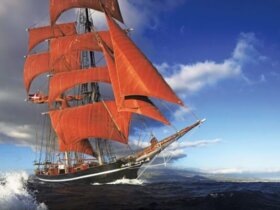 NEWS: Tall Ship Eye of the Wind Bound for Caribbean

My first encounter with wild Vervet monkeys occurred when I led a photo safari to Kenya.  We’d only just arrived at the Samburu Game Lodge when I heard a blood curdling scream.  I ran up the river bank to handle the latest ‘professor emergency’ only to find myself in a snow storm. Since it was at least 95 degrees, I looked up into the trees toward the sky.  There in the trees was a troop of Black Faced Vervet monkeys chattering away as they shredded several boxes of Kleenex and rolls of toilet paper into tiny pieces.

On the balcony close by stood the professor wringing her hands and screaming at the monkeys, begging them to return her tissues and toilet paper they’d taken from an annoyingly large suitcase filled with nothing but tissues that she was schlepping all over East Africa.  I joined the gathering crowd, all of us laughing hysterically while watching the Vervets thoroughly enjoy themselves.  So much for trying to console the cranky, pain-in-the rear professor whom the rest of the group was secretly hoping would be eaten by a croc.

Not long ago, I caught a brief mention on TV of Vervets in Barbados.  Thinking I’d heard incorrectly, since Vervets are Old World monkeys and Barbados is in the New World, or western hemisphere, I ran an internet search—sure enough, I had several hits on Vervets in Barbados and elsewhere in the Caribbean.

How did Vervets end up in Caribbean?  It seems that in the 1600s slave ships carried monkeys of the genus Chlorocebus, commonly called Vervets, from sub-Saharan Africa to the islands of St. Kitts, Nevis, and Barbados as well as to Florida as pets or trade goods.  Being quite clever escape artists, the monkeys set themselves free and adapted well to living in the islands; however, they seem to have disappeared in Florida after disease and trapping decimated their small population.

The species found here in the Caribbean, Chlorocebus aethiops sabaeus, commonly called the Green Monkey due to the yellow-greenish tinted fur around their black-skinned faces, developed a firm hold in the bush.  While the Green Monkey does generally sleep in trees it is not considered an arboreal monkey but rather spends its days foraging on the ground for food and staying close to fresh water.

Diurnal, active during the day, some of the Green Monkeys on St. Kitts are famous for stealing brightly colored tropical drinks from unsuspecting tourists; and, in fact, have become somewhat of a tourist attraction.  Research indicates that one out of every seven monkeys on St. Kitts has developed a penchant for alcoholic beverages, and, amazingly, there is some evidence that the fermented fruit found in those drinks keeps the imbibing monkeys healthier than their non-drinking troop members due to the antibiotic properties of that fruit.

Omnivorous feeders, Green Monkeys eat mainly fruits and grasses but also take an occasional bird or lizard, eggs, and insects not to mention helping themselves to an unattended hamburger or fish sandwich.

On Barbados the transplanted Green Monkey was considered an agricultural ‘pest’ by the late 1600s, so a bounty was placed on them and they were hunted to near extinction.  Readily adaptable, the Green Monkeys who survived retreated to heavily forested gullies where it was difficult for the hunters to follow.  Without natural predators, the monkeys thrived and continued to raid crops and help themselves to fruit bearing trees.

By early 1980, scientists studying the Green Monkey in Barbados as well as those capturing the monkeys for shipment to research laboratories estimated that the population was 6,000 – 12,000; estimates from 2003 indicate a population of 14,000.  Data from 1986 indicates that while some 1,000 monkeys were trapped each year, population numbers remained fairly constant albeit with a shift in age; juvenile monkeys replacing the captured adults in the wild.  And, as with other species, a juvenile-heavy population may increase the likelihood of undesirable behavior in that wizened adults are no longer present to teach the young who, in essence, become juvenile delinquents thus compounding the problems.

In order to curb the Green Monkey’s destruction of crops and gardens the government of Barbados maintains a bounty of $7.50 for each monkey tail brought in according to sources in the media and academia.

According to the University of Wisconsin’s National Primate Research Center, in 1980 the Barbados Primate Research Center was established by Jean Baulu, for the purposes of “Control of C. aethiops which is an agricultural pest. Production of monkeys (wild or captive-bred) for polio vaccine production, local and overseas research projects using facilities and resources, display of animals to promote eco-tourism, and gifts of monkeys to zoos to promote Barbados Wildlife Reserve”.

According to the Barbados Wildlife Reserve’s web site, Jean Baulu, a Canadian primatologist established the non-profit Barbados Wildlife Reserve in 1985 where some Green Monkeys are allowed to roam freely, coming to the reserve to feed and leaving at will.  Now combined with the research center, farmers are paid for each humanely captured monkey turned in to the reserve/research center.

A blood bank of over 15,000 specimens is maintained at the research center which also sells approximately 700 – 1,000 Green Monkeys per year to other research facilities.  Tissue from Green Monkey kidneys is used in the production of polio vaccines and other disease related projects.  Live monkeys are kept in labs and zoos throughout the world.  Ironically, the Barbados Green Monkeys’ survival is assured because of its value as a laboratory animal.