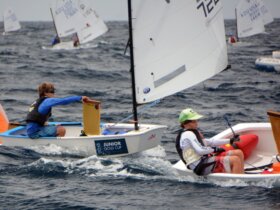 “I’ve been wanting to do this record attempt since it was announced,” said Nils.  “I looked at the forecast and when you dream up a forecast, today was the perfect forecast for doing the race.  A lot of north in the breeze and yesterday there was no breeze, so it was totally glassed over with no swell left.”

Starting off Nanny Cay just before 10am, Soma sailed anti-clockwise leaving Beef, Scrub Island, Great Camanoe and Guana Island to port before heading down the north side of Tortola and through Soper’s Hole back up to Nanny Cay.

The breeze was lighter than forecast but after a two-tack beat up the Sir Francis Drake Channel to Beef Island and then one more to Scrub “it was rootin” by the time Soma reached the north side of Tortola with 20 knots of solid breeze.  “There was as much breeze as we can sail the boat comfortably with full sail,” said Nils.  A power reach with screecher up saw them “pegging the speedo” at 25 knots on the way to Soper’s Hole. Soper’s Hole back to Nanny Cay was tough with “huge rumbly puffs rolling down the hillside” interspersed with no breeze at all.

Total distance point to point is 31 miles, Soma sailed 45 miles to complete the circumnavigation averaging 15 knots with a highest speed of 25.4 knots.

Despite this new record Nils believes that in the right conditions (a good solid north wind at three knots less) and sailing less conservatively he could shave another 15-20 minutes off his time.  However, he also believes his record is easily beatable by such ocean greyhound’s as Tom Hill’s 75-footer Titan.  “At 31 miles, you only have to average 10 knots to beat us.  Most well-sailed maxis could do that,” added Nils.

Soma, has also been the fastest around St Maarten five times, and broke the Round St John record on Sunday.  As he sat in PegLegs enjoying his record-breaker’s meal and Moet & Chandon champagne courtesy of TICO, Nils concluded,“That’s a good week, two records in a week.  Little records but records nevertheless.”

The entry fee of $250 was donated to VISAR this afternoon.

The Nanny Cay Challenge is an all-comers event for multihulls and monohulls. The monohull time to beat of 4 hours, 15 minutes and 5 seconds, was set by Dave West’s Jurakan, a Melges 32.  Competitors must attempt the record anti-clockwise and round Beef, Scrub, Great Camanoe and Guana Island to port.  An entry fee of a $250 donation to a BVI charity of the challenger’s choice, includes two night’s dockage (before and after attempt) at Nanny Cay.

As with most sailing events, the reward is in the taking part and bragging rights but record breakers are able to celebrate their feat with a free dinner at PegLegs for up to 15 crewmembers and a jeroboam of champagne compliments of Nanny Cay Marina.  They’ll also get their name on the trophy which will be on display year-round in PegLegs.

Nanny Cay Resort & Marina is located between Road Town and West End on Tortola in the British Virgin Islands. Its fully equipped marina and boat repair facility has berths for 180 motor cruisers and yachts and two boat lifts of 50 and 70 tons capacity. Nanny Cay also includes a 40-room hotel and new waterfront townhouses for purchase and rental, two restaurants. a chandlery, a small supermarket, shops and boutiques, a dive shop, a water sports center, free WiFi service, and a gym and spa.