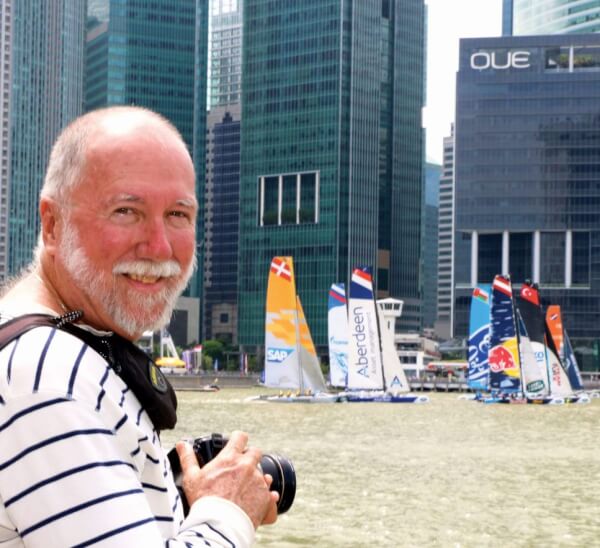 Once upon a time in the late 1980s I spent a summer in Europe following the Formula 40 professional multihull racing circuit for Sail magazine. This was not easy. Often the pre-race parties were so good that I couldn’t find the actual race venue—despite the regattas being three-day events attended by a large spectator fleet.

Regardless, I valiantly put my liver on the line for yachting.

A few things were immediately apparent.

1. Pro yacht racing was held for the audience, not the sailors.

2. It was a race for column inches, media space, and television time.

3. The audience didn’t know the rules nor care.

4. The racing action either had to be up-close or televised.

5. It had to be exciting to witness.

6. Blood and crashes were highly desirable.

7. There was big money in Euro sports.

That last part was something completely new to me. Up until then, I’d covered yacht racing for yacht racers—and the only reason the press was tolerated was to attract the regatta sponsor and/or to the stroke the egos of the participants. Now, suddenly, all of France was rolling out the red carpet: yes, my translator would swing by in my complimentary rental car to drive me to the 5 star (fully comped, natch) resort—and say, would I be needing the helicopter for aerials all three days of the event?

Yes, of course, my room would be filled with flowers and media goody-bags! One final thing: any chance I could pencil in Yves Parlier, John LeCam, or Eric Tabarly for dinner?

I had a swell time in England, France, Italy, Germany, Switzerland and a few other countries I didn’t quite catch the name of. Why, I gained ten pounds in Paris alone! However, it was impossible not to notice a few inconvenient and unfortunate things like, nobody really cared about the races.

The Formula 40 circuit only took off commercially in France, really, where a yacht regatta might generate five to eight hours of live TV coverage. Otherwise, it was like bringing a giant aquatic circus to town-–and not telling anyone.

Most of the venues were empty of spectators—with nary a television camera in sight. It’s hard to sell tickets to a sport no one can see. The professional Formula 40 Pro circuit soon folded—fortuitously for me, as my liver was hanging by a thread.

I learned two major things: one, it was tough to get a professional yacht racing circuit off the ground, and, two, mooching at such Euro events was amazingly sweet. 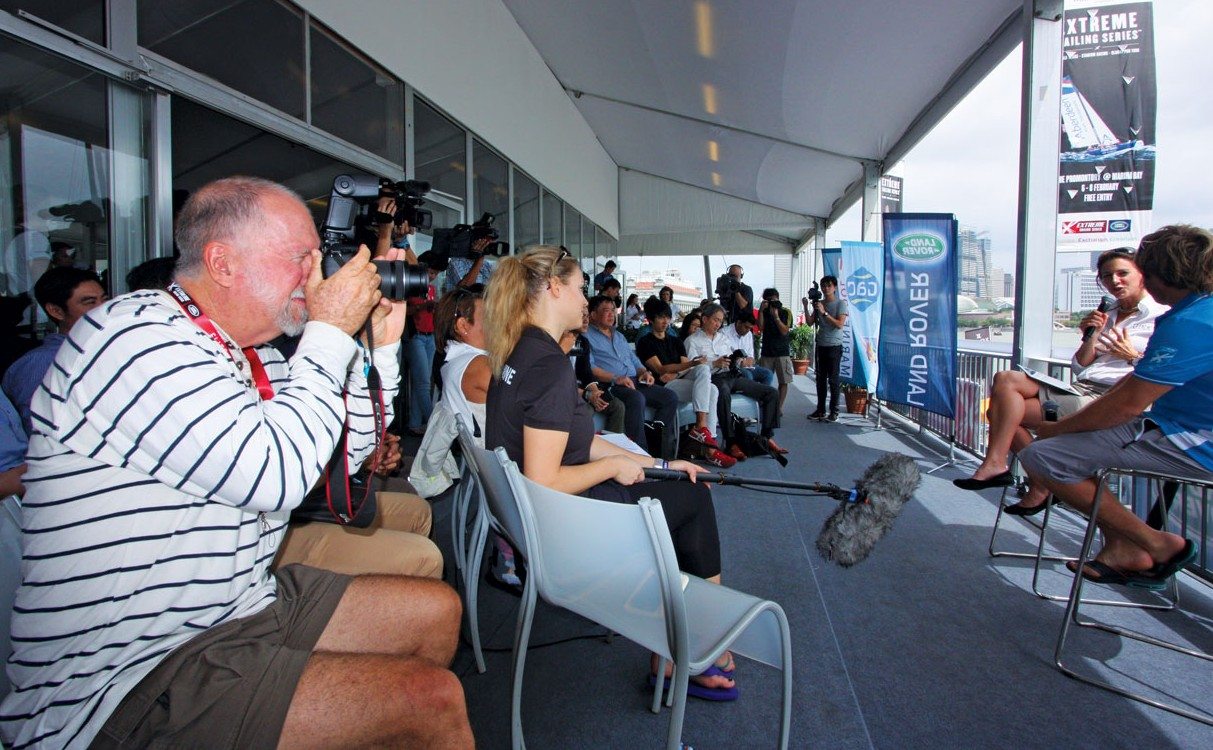 Now let’s fast forward almost 30 years. I recently attended the Extreme 40 event in Singapore—and I’m happy to say they lavishly wined and dined the press as well as I remembered. Even better, they had addressed each and every negative of the Formula 40 debacle.

1. The race was now called Stadium Racing. The catamarans were never out of sight.

2. Formula One motorcar racing was the corporate model: the boats even have a ‘pit lane.’

4. The regatta village was huge—and traveled from venue to venue with the boats.

5. There was constant digital coverage of every race broadcast continuously over the Internet.

6. As far as the spectators went, the simplified rules were: the first boat across the line wins.

7. The final race was worth double-points—everything conspiring for a photo-finish.

8. Crews are profiled and back-grounded extensively so we journos barely had to lift a finger.

9. Copyright-free copy, photos, and video are distributed to one and all.

10. Interviews were easily arranged, and if the skippers balked, they were beheaded. (Well, almost.)

11. Nationalism is stressed, as is team play, the Olympics and the America’s Cup.

12. Sponsorship and signage were everywhere.

14. The entire concept is owned by OC Sports—which is also involved in running, cycling, etc.

15. Organizers allowed hundreds of journalists and VIPs to feel the excitement as “sixth crewmembers.”

16. The course was set up to make collisions inevitable—the closer to the TV cameras, the better.

17. Every effort was made to accommodate the press, especially local and non-marine press.

19. Computers analyzed every second of the races—and digitally and graphically preserved it.

20. Millions and millions of dollars spent by organizers at each venue.

21. There were lavish magazines given away, huge video screens, giant speakers blaring, etc.

And the end result was the same: nobody cared.

This is sad. As far as I know, the organizers, OC Sports, and the PR department of the Extreme 40s are doing every single thing right—to no avail. I, personally, cannot think of one single thing they could do better to promote such a professional yacht racing circuit. And it has, as near as I can tell, fallen flat on its face. Which isn’t to say the Extreme 40 racing isn’t good or the crews aren’t having a ball. They are. Everything about the Extreme 40s is impressive—except no one ashore cares, and few in the corporate boardroom do either.

The only place it appears to be gaining a little traction is with its VIP Corporate Hospitality Centers—where corporations with deep pockets stroke their preferred customers.

And yet someone is spending millions here to make Stadium Racing a mainstream professional sport—and failing miserably. Who? OC Sports? The Sultan of Oman?

This isn’t what I want to say. As a professional marine journalist of 30 plus years I sincerely want to write up a glowing report that someone has finally found the magic formula. Alas, I cannot.

I hope I’m wrong. I hope this is just a ‘down’ year and the Extreme 40s will come roaring back to replace the America’s Cup.

But I doubt it.

In fact, I’m not sure how much longer the Extreme 40s will be around. Part of the problem, perhaps, is that yacht racing is intrinsically intertwined with vast wealth. The sport denies its ‘elitist image’ but it didn’t get that image by happenstance. If a ghetto kid in America gets pissed off at the NFL, he can’t take his stadium and go home. Wealthy people can and do.

Of course, I only have Singapore to judge by—but interest for Extreme Sailing in Asia is obviously ebbing.

In the international sporting public’s eye, it is still the America’s Cup which matters, maybe the Volvo, and not-much-else really. Sure, the English love Cowes; the French, the Route De Rhum; and the Aussies love the Sydney-Hobart race. But none of these events hold a candle to Formula One motorcar racing or Professional Tennis or Golf or even Pro Bowling or Pro Billiards… let alone Cricket, World Cup Soccer or the National Football League.

Even worse, interest in the Extreme 40s appears to be waning even as more and more money is being spent to fan its base. In Singapore, the small crowd numbered in the low hundreds—with many people having no idea of what they were seeing. The sole bar in the regatta village had empty seats the entire time. Even the ‘freebie’ bar for VIPs and press was practically empty.

Hard liquor is expensive in Singapore. When you can’t give it away to sailors and journos, you’re in serious trouble.

Last year, many of the hottest America’s Cup skippers participated in the Extreme 40s—this year none did. In order to keep the entry numbers up, private (read: rich folk) teams from Turkey and Russia, etc., were invited to attend.

For me, the saddest part was hearing a roomful of totally unknown sailors being repeatedly described as the ‘the world’s best’ and ‘the world’s most famous’ yacht racers.

Sure, the boats are a bit stodgy. They don’t foil. But foilers aren’t maneuverable enough for these crowded courses—and they are too fragile as well.

Besides, if you made the race course bigger and the boats bigger—would that make the racing more exciting or less? One thing is for certain—it would make conducting the races more expensive. And it is already damned expensive moving an entire regatta and its village from country to country ten times a season.

Our old Formula 40 lament was all about TV airtime. We sailors felt that traditional television networks were the gatekeepers—and that as long as they denied us their cameras, pro yacht racing would get nowhere.

The Internet changed all that. Now anyone in the world can follow a digital simulation, almost in real time, tack by tack—but only few do. The technology is there—just not the interest. In fact, no one seems to know how many Internet viewers there are for the Extreme 40s—which is a sure sign the number is so low as to be unmentionable.

High quality daily video is provided each day and after every regatta. Whether anyone is viewing it is unclear.

This is especially puzzling in the GoPro-crazed age when almost any idiot’s sports video is splashed on YouTube to good commercial effect.

The parent company of OC Sports claims to have offices in England, Switzerland, France, and Singapore, with telephone landlines at the first two locations. Regardless, OC Sports has done a superb job of promoting China’s Dongfeng racing team and various other yacht racing events. They seem like a hardworking, imaginative, and creative bunch. I wish them well. But getting couch potato landlubbers interested in yacht racing ain’t easy—and somebody is learning this lesson the expensive way.

Bio Note: Fatty and Carolyn have just published CREATIVE ANCHORING and are celebrating by meandering northward in the Malacca Straits.