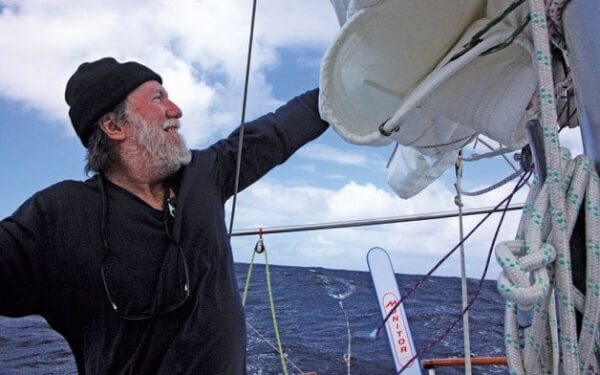 The sea is full of surprises. No matter how many oceans you cross, the one you are transiting can throw you a curve. Recently, we were running in reinforced Trades and larges seas along the north coast of Columbia when an additional swell set started building from the Nor’west. This wasn’t, at first, a problem except when a breaking sea, Ganesh, and the building wave train coincided. Our vessel would suddenly round up, and try to fall on its beam-ends—a potentially dangerous situation (broaching is a tad too thrilling for us non-racers).

The convergence of forces was rare. We’d go an hour or two with no trouble… our Monitor Windvane™ steering us flawless… and then, wham!, we’d be rounding up with luffing sails and hard-over rudder.

What do you do?

I’ve heard the following said many times: “…at the height of a gale is no time to experiment!”

I respectfully disagree. True, you should be as prepared as possible pre-storm, but it is only during ‘battle conditions’ so to speak that certain experiments can be profitably performed—and should be. It is very difficult to demonstrate heaving-to in 20 knots of breeze—and easy as pie in 35-40 knots.

But in this particular case, night was coming. The clock was ticking. I wanted a ‘happy’ boat at sunset, so my wife Carolyn and I could stay well-rested and relaxed.

Pride and Fall of a Mariner

So I sat in the cockpit for hours, just watching the natural forces at work. Our average speed was 7.5 knots. It wasn’t the wind causing the initial off-course problem, it was the waves. Our Wauquiez 43 would get squirrelly at the onset of a surf. The problem was only momentary, but dramatic. If I wanted a comfortable night, I’d have to do something proactive.

This is one of my heavy-weather concepts: be proactive. It is not a good idea to wait until you roll your boat to take action to prevent it from rolling. You have to act early; to overcome your inner inertia.

I considered my options. We could heave to. This is easy and safe—but we’d be stopped. We were currently making good speed directly at Colon, Panama, and I didn’t want to cease making progress during such favorable, if brisk, conditions.

Normally, reducing sail area is the solution. But I had tried that, and we only rolled more. Ganesh’s rudder became more and more inefficient at low speeds. So ‘less sail, less speed’ didn’t equal ‘more comfort’ in this case.

Tossing out a sea anchor would instantly provide safety—but also stop us dead. Sea anchors are great in the ultimate storm, true, but not as useful as a daily tool. And retrieving one is no fun—actually, it is the most dangerous thing I have ever intentionally done in my life. Then you have to soak and rinse and soak it again in fresh water—this is true of any Nylon sea anchor—making it a big hassle to deploy.

No, I wanted something simple, quick, and uncomplicated.

Another factor, Carolyn was asleep below. I didn’t want to wake her.

I glanced around the deck. Just the usual stuff: fenders, lines, and such. It was time to make a drogue.

I clapped a fender onto the end of a long spare Dacron® spinnaker sheet… and put three more equally spaced (tied only at one end, not inline) along the same line. Then I double-carricked on a nylon anchor rode to put the whole mess far astern and create a soft spring effect.

Deploying any drogue is the dangerous part. You have to double and triple check that everything will lead smoothly into the sea before you begin. I made sure there was no problem, and I knew my aft bitts  (large, with giant backing plates) were strong.

Immediately, the too-lively Ganesh stopped tossing her transom about. There was now no tendency to surf—the minute she started to, the fenders would be pulled in the backside of a large following sea, and she’d stop almost before she’d begun.

The Monitor Windvane™ now worked perfectly—and did so for the next two thrilling days. We only lost about three-quarters of a knot, and gained much peace of mind.

It was a tiny, quiet experiment that cost nothing—and returned our ‘pleasure cruise’ to exactly that.

The best advice I have ever received about heavy weather sailing is: “Stay on deck. Watch. Observe what it happening. It is all simple physics—waves, wind, and vessel. Storm management is an open book—if you but look.”

I often don Bose noise-cancelling headphones under my foul weather jacket hood during these long, meditative observation sessions—it is amazing how much easier it is to think clearly with the ‘shriek’ of the storm muted. (No, I didn’t learn this trick from Josh Slocum!)

The point is—no one knows your boat and its characteristics better than you. There is no ‘right way’ that applies to all boats in all situations. Each is unique. Only careful thought and frequent experimentation can uncover the answers—each offshore sailor is his own best teacher IF he listens to his vessel and the sea for the answers.

I constantly read about the ‘best’ way to trim a sail—yet 50% of the time I trim a sail, it is NOT to go faster. It is to reduce roll or prevent chafe or eliminate jib-sheet ‘popping’ or reduce/induce weather helm, all of which are perfectly legitimate reasons to trim.

Take my mizzen mast and sail, as example. Many folks don’t like ketches, saying the ‘mizzen doesn’t pay for itself upwind.” Maybe so. But it sure pays in other ways. Example: if the wind is on or forward of the beam, I simply let go of my wheel and trim the mizzen—until she tracks perfectly, with exactly the amount of weather helm desired. Do I want to double the size of my mainsail off the wind? Then, ‘pop’ goes the mizzen staysail. Am I rolling a tad too much in a poor anchorage and don’t want to deploy my flopper stoppers? Then I hoist up my (very flat-cut, super strong) mizzen sail, take the strain off the leech with the topping lift, and sheet hard.

Do you want to sail off the mooring in a crowded harbor but MUST go off on starboard tack? Then push the mizzen sail to port and wait—you will soon be confident of your initial direction.

Where’s the perfect place to mount your wind gen and radar? To guy your med-moor-boarding-ladder from? To use as an impromptu dinghy outboard hoist?

…why, the mizzen, of course!

Does the mast ‘pay for itself’ while going to windward? I dunno. Maybe not. But I sure love the damn thing, regardless.

Nowadays, many sailors are convinced that their Beneteaus and Bavarias have properly led sheets because, well, that’s where the factory led ‘em! Things were different not too long ago. The schooners I grew up on didn’t have any deck track, only huge pad eyes and strong handy-billys.

The pad eyes got the sails trimmed ‘in the neighborhood’ of correct—with the handy-billy then deployed for fine-tuning. Each sailor had to know the desired sail shape he wanted before he could get it. I still frequently use handy-billys (portable block and tackles or even a single line) to lift or lower my jib and staysail clews…it is easier and faster than moving my genoa track cars. Ditto if I want to introduce more twist or just yank the clew further inboard to point higher in smooth seas.

Chafe prevention is another big reason I trim—a mainsail’s life can be doubled or tripled if vanged to reduce spreader and aft-lower chafe.

Basically, with two lines–a sheet and a handy-billy–and a steady breeze, a seasoned sailor should be able to place his clew wherever and whenever and whyever he wants, cheaply and easily.

On our previous boat, an S&S-designed Hughes 38, we found that she had trouble going to windward while heavily laden at the start of an ocean passage. To eliminate this, we moved all the chain and anchors into our head during passage, and she returned to her old weatherly self.

…surprise: she hove-to and sat to a sea anchor much better as well—all of which we’d have never known if we had not experimented. You can’t find out what works best for you and your craft until you try various solutions. This is all part of traditional seamanship. All good sailors do it.

I’ve delivered boats that didn’t want to heave-to in a blow until I hoisted a sail bag aloft…not the sail, but the sail in its bag. It was just enough windage forward to keep her from tacking while hove-to, and a comfortable gale was had by all.

Does your storm trysail make an excellent roll-retarder when hoisted upside down in an atoll? If so, use it!

I have never had a self-tailing sheet winch in my life—I just add a few wraps and toss the bitter end of the genoa sheet  overboard—King Neptune does the tailing!

Can’t afford to buy a row of expensive ‘sheet clutches’ to clutter your cockpit? Then learn how to tie a rolling hitch—a knot that you should know anyway—to quickly clear a winch override.

Are your through-bolted bails beginning to tear through your aluminum boom (after 10,000 ocean miles or so)? Then sew up some Nylon webbing, pound in a grommet or two, and have a boom attachment point that is safer, stronger, lighter, and kinder to the boom.

Does a roll of duct tape eliminate the need for a sailmaker?…well, no, not forever. But sticky-back can often survive for the months it takes to get back to a sea-going seamstress.

Is something bent that shouldn’t be, like a boom or pole? Then ‘fish’ it back together with a rigid sprint (wood, usually) and a million electrical ties. Add some wax twine, some ‘small stuff’ lacing cord, and a few discarded sheet ends… and you’ve got a repair good for at least another ocean or two (toss in a few super-large hose clamps as well).

It is fun, simple, and cheap; it’s one of the true joys of cruising.

Fatty and Carolyn are currently experimenting in the landless, peopleless atoll of Beveridge Reef, in the middle of the Pacific ocean.